The madness from March is expected to continue into April as the Final Four tips off this weekend in New Orleans, Louisiana. Headlining the final weekend of the 2022 NCAA Tournament, Duke will meet UNC during March Madness for the first time ever. Duke head coach Mike Krzyzewski and the Blue Devils are one way away from a storybook ending in the National Championship Game but it appears not everyone is rooting for the legendary coach. In fact, America is betting against Coach K in the Duke UNC game. 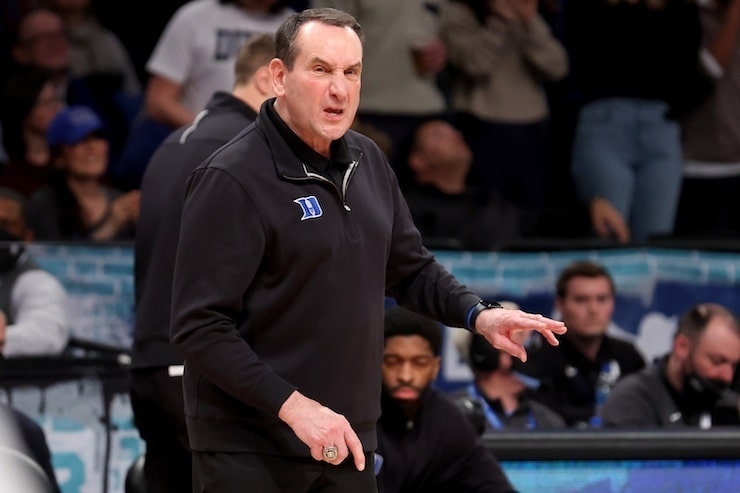 According to the latest information from the top online sportsbooks, 63 percent of Americans are betting against Coach K and Duke vs North Carolina.

While more than half of the country will be betting against Duke this weekend, it appears the sharp money is keeping the Final Four odds from getting out of hand. Duke is garnering only 37 percent of the point spread betting, according to industry experts, but the spread has held strong at -4.0, an indication that sharps are betting on Duke to advance to the National Championship Game.

For the latest NCAA Final Four odds, check out the March Madness betting lines from BetOnline below.

Americans aren’t the only ones rooting against Coach K and the Blue Devils in the Final Four. The best online sportsbooks will also be crossing their fingers in hopes of a Duke loss vs UNC on Saturday night.

Not only has Duke drawn most of the sharp betting action ahead of this weekend’s Final Four tilt against North Carolina, but the Blue Devils are also among the biggest liabilities at the online sportsbooks.

Will Coach K be able to cut down the nets in the National Championship Game?

Below, we’ll break down the odds to win March Madness for each of the Final Four teams from BetOnline.

How many times have Liverpool and Chelsea met in major cup finals? Full record, history ahead of FA Cup clash

How many times have Liverpool and Chelsea met in major cup finals? Full record, history ahead of FA Cup clash