Aubameyang’s Barcelona goals: How many has ex-Arsenal striker scored with Spanish giants?

Pierre-Emerick Aubameyang is providing a reminder of his quality after joining Spanish giants Barcelona following a frustrating conclusion to his spell at Arsenal.

The striker joined Barcelona on a free transfer at the January 2022 transfer window deadline, officially unveiled on Feb. 2 after his Gunners contract was terminated by mutual consent.

Even though he is now in the latter stages of his career, the 32-year-old Aubameyang is relishing the opportunity to play regularly again.

Here’s a look at the impact that Aubameyang has made for Barcelona so far.

Here’s the latest tally of goals that the former Arsenal captain has for his new club. He’s now up to 9 goals in 12 appearances across all competitions:

Aubameyang failed to score in his first three appearances for Barcelona. He made his debut as a substitute against Atletico Madrid, and then also came off the bench for a La Liga game against rivals Espanyol.

The Gabon international was given his first start for his new club against Napoli in the Europa League, but he was again unable to find the net. 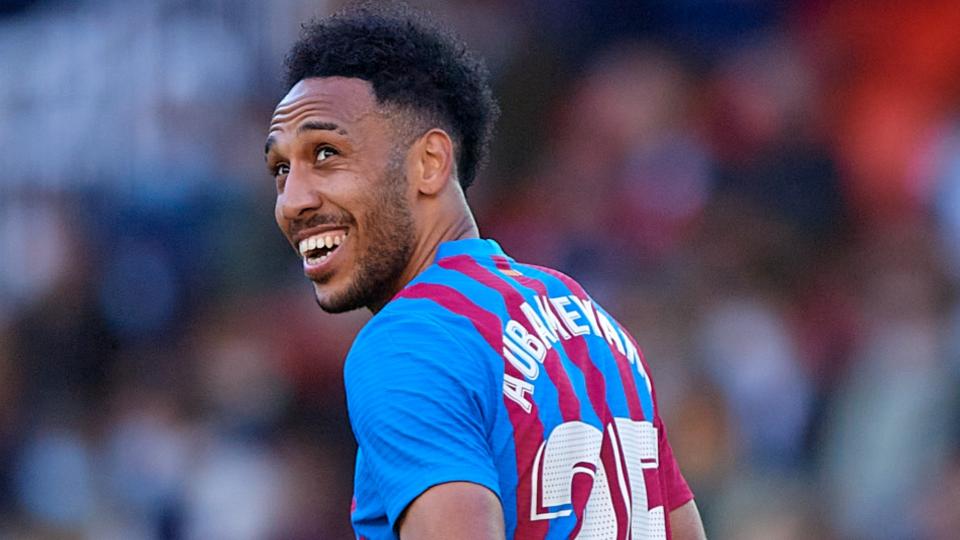 Those matches were clearly only a warmup. On February 20 Aubameyang got his first Barcelona goals, and he did so in some style as he hit for a hat-trick in a 4-1 La Liga victory away to Valencia.

He scored with an emphatic finish in the 23rd minute, then doubled his tally on a volley 15 minutes later. A goal scored in the 63rd minute was initially credited to Pedri, but was later given to Aubameyang after the ball cannoned off his back. Maybe things are beginning to look up for Aubameyang after all.

He then bagged another tally came in the Europa League against Napoli with a quality, one-touch finish into the top corner.

After a goal against Athletic in La Liga play where he put Barcelona in front to open the scoring, and another against Osasuna (the third goal in a 4-0 rout), he bagged his Europa League strike against Galatasaray. Then came the huge brace against Real Madrid, first putting Barcelona 1-0 up in El Clasico, then tacking on a second to make it 4-0 in a rout.

3 – @FCBarcelona‘s Pierre-Emerick Aubameyang 🇬🇦 is the first player to be directly involved in three goals in his first appearance in #ElClásico in all competitions in the 21st century (two goals and an assist). Impressive. pic.twitter.com/b8HIZYFEKP

How many goals did Aubameyang score for Arsenal?

Aubameyang’s final campaign as an Arsenal player certainly didn’t go as he intended. He scored just four goals in 14 Premier League games and frequently struggled to make an impact. 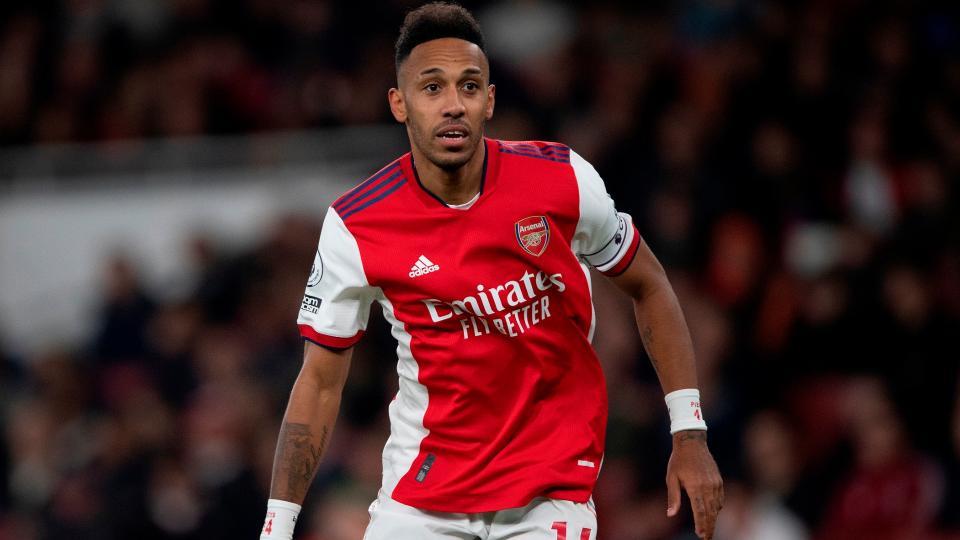 After eventually being dropped from the starting lineup, Aubameyang was then left out of the squad entirely and was stripped of the captaincy by manager Mikel Arteta for disciplinary reasons.

It became increasingly clear that Aubameyang would leave Arsenal after he wasn’t selected to travel to Dubai for a warm-weather training camp. Arsenal announced on Feb. 1 that Aubameyang had left the club by mutual consent.

He hit double-digit goals in his previous four seasons with Arsenal, including 31 goals in 2018-19 and 29 goals in 2019-20 across all competitions. It was no wonder he was eventually named captain.

Aubameyang signed a contract with Barcelona that runs until the summer of 2025, with the deal including a release clause of $112 million. But there is also an out-clause for Barcelona, with an option to agree a departure on June 30, 2023.

MORE: Aubameyang wins again by forcing his way out of Arsenal

Arsenal will reportedly still pay part of Aubameyang’s wages until the end of the current season via a series of installments rather than a lump sum, according to The Athletic.

As reported by The Guardian, Aubameyang will earn around $2.8 million for his first five months at Barcelona.

Beginning in the summer, Barcelona will take full responsibility for Aubameyang’s earnings.