Dillian Whyte says he will be ready for whatever “unpredictable” Tyson Fury brings in Saturday’s WBC heavyweight title clash at Wembley.

Fury is making his second defence of the title following his 11th-round knockout of Deontay Wilder in October, ending a trio of fights that have shown the Brit’s ability to vary his approach from bout to bout with great success.

However, Whyte insists he has prepared for every eventuality and is confident of dealing with whatever tactics his undefeated opponent brings in front of a European-fight record 94,000 crowd.

“He can be unpredictable so we’re just trying to be as ready as we can be, trying to create all different kinds of circumstances, different situations so whatever he brings, we’ll be ready.” Whyte has been made to wait for his title shot but having stayed quiet for much of the build-up to the fight, he is adamant that he will keep his cool and not let the occasion get to him.

“One of the biggest mistakes people make is that they wait for something and then when they get there, they just blow up and being too much like ‘I’m here, I’m here!’ No,” he added.

“I’m trying to get the job done. When I get the job done then I’ll start acting crazy but now, I need to be focused on the job. Not ‘wow, I’m here!’ Just focus on the job, win the fight then afterwards you can do whatever you want.”

That calm was on show in a surprisingly amicable face-off that saw mutual respect abound and the two fighters even acting as peacemakers during a heated exchange between their teams. 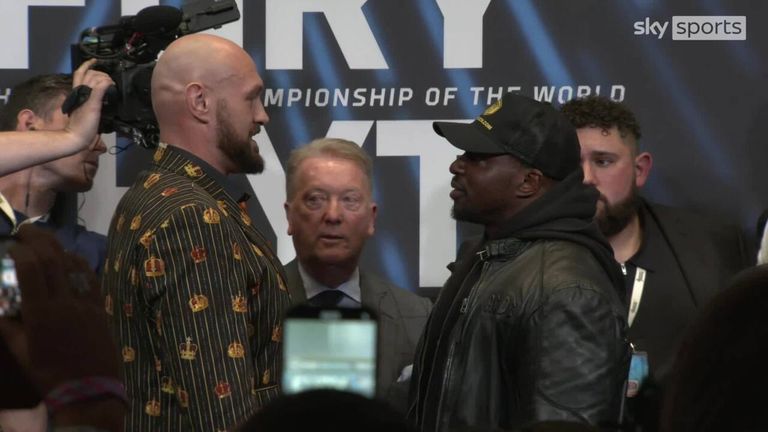 “He didn’t respect Wilder, Wilder’s an athlete so you treat him like that but with me, he knows different so he’s treating me with the respect I deserve and if you give me respect, I’ll give you respect. That’s it,” Whyte explained.

“(I wasn’t surprised) because he knows me and what I’m about, and I know him. He knows the danger I pose, and I know the danger he poses. There’s mutual respect there.” Fury says he and Whyte are ready to ‘rock and roll’

The Jamaican-born fighter reiterated his disappointment at the 80-20 purse split in Fury’s favour and while he refuses to get worked up about it, Whyte suggested the tables would be turned in the event of a rematch.