Brilliant Burnley beat Saints | Redknapp: They’ve given themselves a chance

Connor Roberts and Nathan Collins were the unlikely Burnley heroes as the Clarets boosted their Premier League survival bid with a priceless 2-0 victory over Southampton at Turf Moor.

Roberts settled Burnley’s early nerves with a sumptuous, curled effort (12) – his first Premier League goal – before Collins headed in for only the second time in the top flight (44) to put the seal on a dominant first-half performance in which the hosts could only be criticised for not scoring more.

Southampton were indebted to goalkeeper Fraser Forster for keeping their hopes of salvaging something alive as long as they did, but with substitute Che Adams spurning their best chances after the break there was no way for back for Ralph Hasenhuttl’s off-colour Saints, who succumbed to a sixth defeat in their last eight matches in all competitions.

Victory extends Burnley’s unbeaten start to life after Sean Dyche to two matches and sees Mike Jackson’s 18th-placed Clarets move to within a point of safety. Repeat the performance and result against Wolves on Sunday, and Burnley will climb out of the bottom three at the expense of Everton, piling the pressure on the Toffees ahead of the Merseyside derby.

Man of the Match: Connor Roberts.

Burnley nearly paid the price for their early nerves when Oriol Romeu headed a gilt-edged chance wide from James Ward-Prowse’s corner with just seven minutes on the clock. Five minutes later those nerves were settled in emphatic fashion.

Returning right-back Roberts picked up the ball in a pocket of space on the edge of the area and, off his unfavoured left foot, picked out the far corner of the Southampton with an exquisite, curled finish. Roberts curls in a stunner!

Goalkeeper Forster single-handedly kept Southampton in the game, brilliantly smothering Wout Weghorst’s shot and denying Jay Rodriguez’s header from a corner, from which Weghorst headed the rebound onto the bar from all of three yards.

Romeu squandered another presentable headed opportunity from a corner before Dwight McNeil forced another fine save from Forster before Burnley finally underscored their superiority in the final minute of the half when Collins’ towering header from Josh Brownhill’s corner was allowed to stand after VAR ruled Jack Cork has not interfered from an offside position. Burnley had the ball in the Southampton net for the third time on 62 minutes, but Cork was adjudged to have bundled the ball in from an offside position, as VAR spared Forster’s blushes seconds after he had spilled James Tarkowski’s header back across the face of goal.

Southampton, boosted by the introduction of Adams, threatened to force their way back into the contest, but the substitute fired straight at Nick Pope with his very first involvement, before taking an age to release a shot soon after as the sliding Charlie Taylor preserved Burnley’s two-goal lead, and erased any lingering chance of a Saints comeback.

“Burnley have good honest characters and have given themselves a lifeline today. Whether Sean Dyche was in charge or not, Burnley will have identified the matches against Southampton, Wolves and Watford as games where they could really get points.

“Wolves are up next at home. That is the really big one – can they put the pressure right on Everton, who head into the Merseyside derby against a formidable Liverpool side?

‘Burnley remembered what they were’ 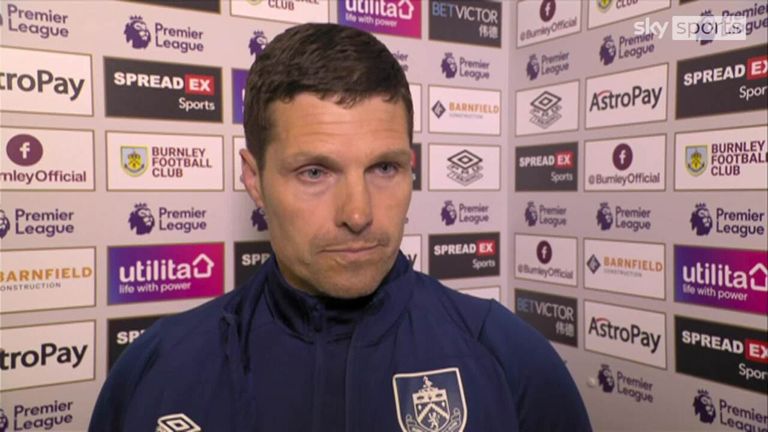 Burnley caretaker manager Mike Jackson praised his players for the belief and fight they showed in their crucial 2-0 win against Southampton.

Burnley caretaker boss Mike Jackson: “The players remembered what they were. We haven’t done loads different, but they have come together as a group. Everyone has mucked in, and it is a great result.

“It was good to watch. Towards the end they have had a couple of chances. You have to enjoy the game when you win, don’t think about anything else.

“The crowd were terrific. You could see it lift the players. We said, ‘bring them with you’ and I think we did that. We have to make sure we deliver against Wolves.” 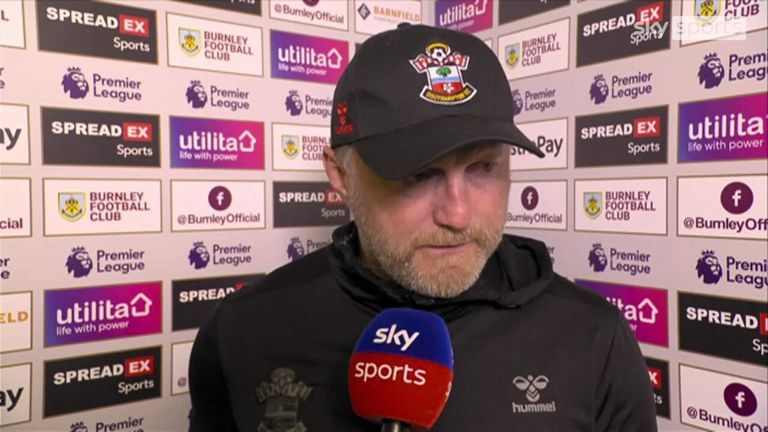 Southampton boss Ralph Hasenhuttl says his side suffered from a ‘lack of aggression’ in their 2-0 defeat to Burnley.

Southampton manager Ralph Hasenhuttl: “We had a very good chance at the beginning and the first goal is important. They then had the belief, and we haven’t been physically good enough.

“The first half simply not aggressive enough, not sharp enough. They defended well and we didn’t have the quality to break them down.”

Man of the Match – Connor Roberts

Connor Roberts scored with Burnley’s first attempt in this game, the fifth time they have scored with their first shot on goal in a Premier League match this season – only Arsenal (6) have done so more often.

Burnley host Wolves while Southampton travel to Brighton in the Premier League on Sunday at 2pm.