Whether you want to credit the Memphis Grizzlies for their 26-point comeback or hammer the Minnesota Timberwolves for a fourth-quarter meltdown, there is plenty to be said about their back-and-forth Game 3.

The Timberwolves held two separate 20-plus-point leads at home with a chance to take a 2-1 series lead over the higher-seeded Grizzlies but they couldn’t close things out.

Memphis trailed by 16 points heading into the fourth quarter and star guard Ja Morant couldn’t get anything going, scoring just 11 points on 3-for-10 shooting from the field. The Grizzlies looked lifeless at the end of the third quarter but quickly flipped the script, starting the fourth on a 16-0 run to tie the game in fewer than four minutes of game time.

From that point on, it was the Timberwolves who looked like they had run out of gas with no fight left in them. Memphis trounced Minnesota on its home floor, outscoring the Timberwolves 37-12 in the fourth quarter to pull complete a comeback and steal one on the road to take a 2-1 series lead.

Take a look at some jaw-dropping numbers to help explain this comeback.

MORE: Watch the NBA playoffs on Sling TV (U.S. only)

25: Grizzlies’ fourth-quarter point differential, tied for most by a road team in NBA playoff history

The Grizzlies started the fourth quarter on a 19-2 run to take their first lead of the game.

Morant started to come alive, Desmond Bane continued to knock down big perimeter shots and Tyus Jones and Brandon Clarke were the unsung heroes who pulled it all together.

Once the Grizzlies threw their counterpunch to regain control of the game, the Timberwolves had no answer. Memphis held Minnesota to 3-for-19 shooting from the field and 1-for-11 from 3 in the final frame. The Timberwolves had the same number of turnovers (3) as made field goals. They were also completely outhustled on the glass, losing that battle 19-5 in the fourth quarter.

The result: the Grizzlies outscored the Timberwolves 37-12, tied for the largest fourth-quarter point differential by a road team in NBA Playoff history, per ESPN Stats & Info. 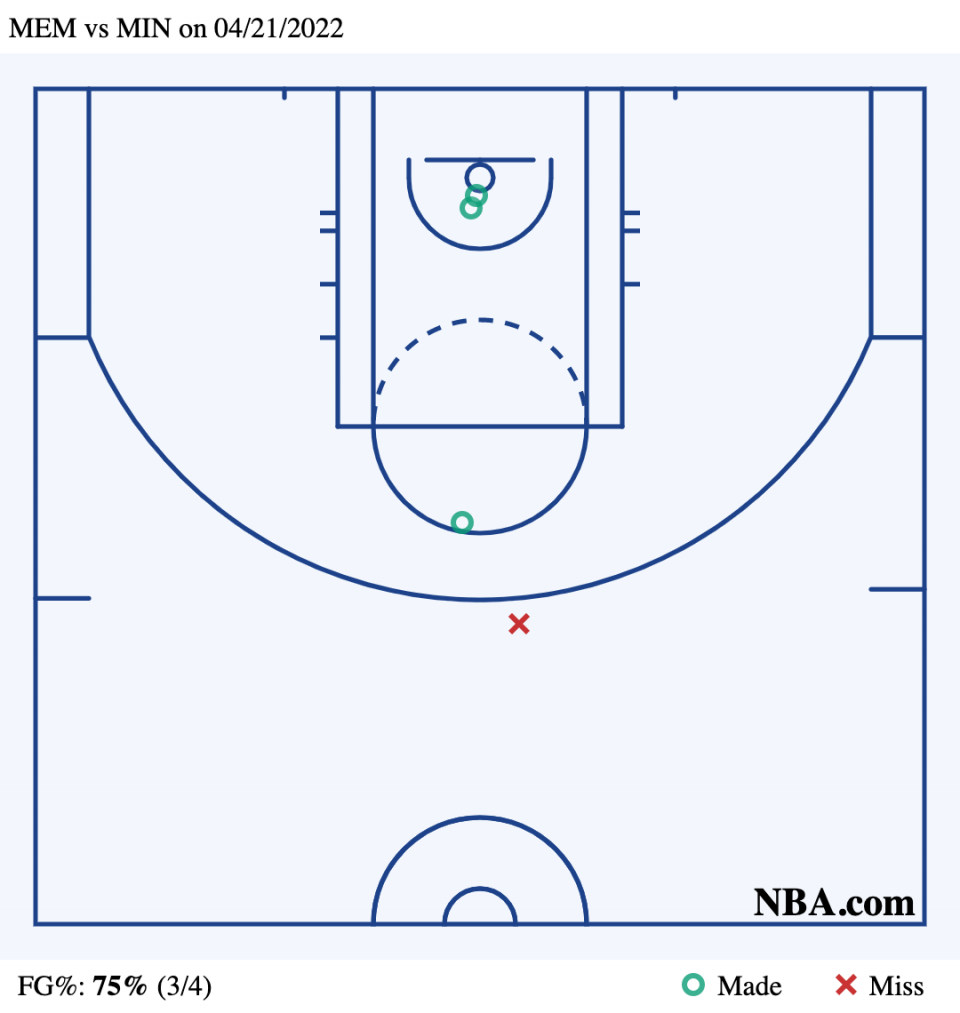 Towns was dealing with foul trouble in this game – as we have seen in three of his four postseason games this year. Towns had played fewer than 25 minutes going into the fourth quarter, only tallying six points and four rebounds on 2-for-3 shooting from the field.

The All-Star center went scoreless from the 6:49 mark in the first quarter to the 3:36 mark in the fourth quarter, when his team had already surrendered its double-digit lead.

Towns only attempted one (!) shot in the entire second half, finishing the game with only four total shot attempts.

It was the first time in his NBA career that Towns attempted fewer than five shots in a game – something he hadn’t done since he was a freshman at Kentucky back in 2015.

If the Timberwolves are going to have a chance in this series, they will need Towns to stop fouling so he can stay on the floor and get into a rhythm offensively.

Aside from Bane, the Grizzlies couldn’t get anything going on offense for three quarters of this game. Bane’s perimeter shooting has been a key factor in Memphis’ success this season and he was the glue that held his team together for the majority of the night.

Bane buried two big 3-pointers in the fourth – one to tie the game for the first time since the score was 0-0 and another to take a five-point lead with under five minutes to play.

His 26 points led all scorers in this contest and his seven 3-pointers set a Grizzlies’ franchise record for 3s made in a playoff game.

It was far from the best game Morant has ever played, but he still found a way to make an impact across the board and help his team to a win.

Morant couldn’t get much of anything to drop, scoring just 16 points while shooting 5-for-18 from the field. He even struggled on his free throws, going 5-for-10 from the charity stripe. To add to his rough outing, he also had seven turnovers.

But Morant’s playmaking and aggressiveness on the boards saw him tally 10 assists and 10 rebounds, giving him a triple-double.

Even if it wasn’t pretty, it was the first triple-double in Grizzlies’ franchise playoff history, giving Morant something else to celebrate aside from a miraculous comeback victory for his team.