Paul Nicholls is double-handed as he looks for back-to-back victories in the bet365 Celebration Chase at Sandown on Saturday.

Nicholls saddled Greaneteen to land the spoils 12 months ago and he is back to defend his crown, with the eight-year-old looking for a third Grade One victory over course and distance having also tasted success in the Tingle Creek at the Esher venue in December.

Harry Cobden takes over from the injured Bryony Frost aboard the eight-times winner with Nicholls optimistic of another bold showing, despite a disappointing effort in Ireland last time.

He said: “He has a great record at Sandown, won this race a year ago, and then landed the Tingle Creek in style in December. He is nice and fresh as he returns to defend his crown. I’m very happy with Greaneteen who is in good order, has the ground in his favour and looks to have a lovely chance of winning again.”

The Ditcheat handler also runs Rouge Vif, who is yet to make his mark since joining Nicholls from Harry Whittington last summer, but could benefit from a recent wind operation.

“He was struggling badly with his breathing at Kempton in January and seems much happier since we sent him for a tie forward operation to put that right,” Nicholls told Betfair.

“He had some smart form at this trip in the past, is in good shape now and he did a nice piece of work with Greaneteen on an away day last week. It wouldn’t surprise me to see him run into a place.”

Nube Negra marked himself out as a Champion Chase contender when an impressive six-length winner of the Shloer Chase in November, but hasn’t been seen since an underwhelming fourth to Greaneteen here just before Christmas.

The Wednesday deluge at Prestbury Park ruled him out of the Champion Chase at the last minute and he will be hoping to enhance his fine record fresh as handler Dan Skelton attempts to get one over on his former boss Nicholls.

Skelton said: “This is the perfect scenario for Nube Negra, sun on his back, two miles. I’m delighted to be coming here and he’s in really good form.

“It’s no gimme, it’s a strong contest, but I’m very happy with him.” 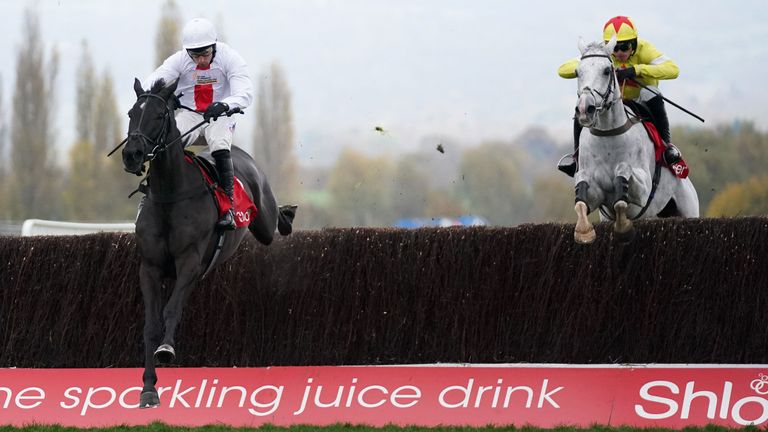 Trainer Dan Skelton is excited to run Nube Negra in the Celebration Chase with ideal conditions and is hoping for a big race from Flegmatik in the bet365 Gold Cup at Sandown.

Alan King’s Sceau Royal has a third attempt at the race and reports the popular 10-year-old to be as good as ever.

The Simon Munir and Isaac Souede-owned gelding moved up in trip when a respectable third in the Melling Chase at Aintree most recently, but is now back down to the distance he knows best.

“He’s a terrific little horse and we’ll roll the dice at Sandown once again,” said King. “The ground will be fine for him, he’s probably just a better horse going the other way round, but he has won round Sandown before. We’ll let him take his chance and hopefully he runs a nice race before his summer break.”

The field is completed by Jonjo O’Neill’s Sky Pirate, who is tried in a first-time cheekpieces and tongue-tie combination following his efforts in handicap company at both the Cheltenham Festival and Aintree

Lampard on Merseyside derby: Everton underdogs, but we have to fight