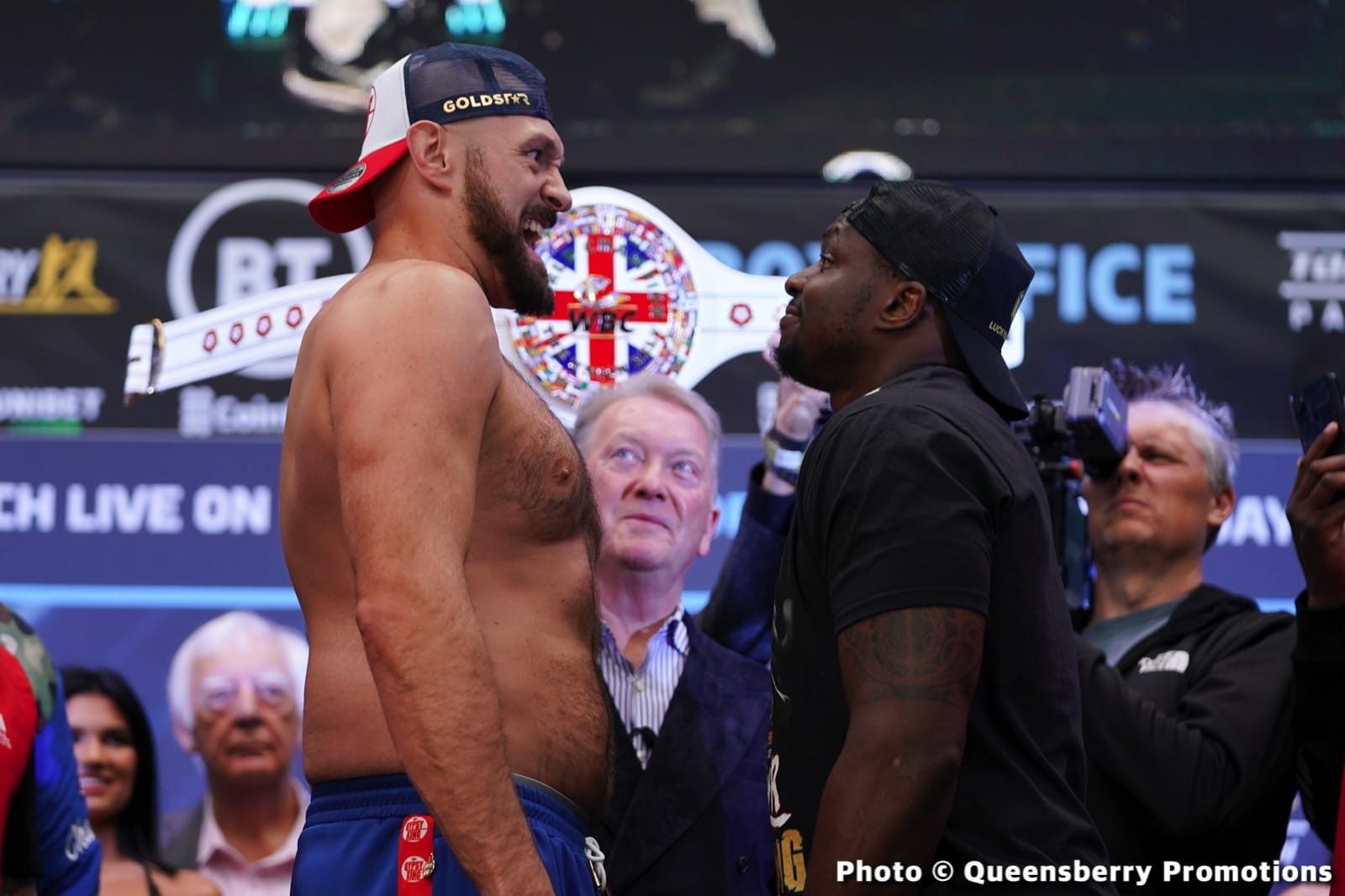 Whyte (28-2, 19 KOs) says he’ll be “getting the victory any way possible,” whether by knockout or decision over the unbeaten Fury in their main event fight.

It’s difficult to gauge where Fury, 33, is at mentally right now, as he’s been doing quite a bit of talking about retirement this week.

Judging by the overall tone of what he’s been saying, he seems to be concerned about retiring with his mental faculties intact so that he enjoys the millions that he’s made during his 14-year professional career.

Fury’s comment about not wanting to be “punch drunk” can mean that he’s got worries about that potentially happening to him if he stays around too long.

After what Fury went through in his recent three-fight series with Deontay Wilder, who can blame him for wanting to retire. He was knocked out cold in their first fight in 2018 and dropped twice in their last one.

If Whyte has been paying attention to what Fury has said this week, he will do well to take the heat to him right off the bat on Saturday, focusing on headshots to finish what Deontay started last October.

Fury might be gunshy after what Wilder put him through, and his concern about getting out of the sport with his health intact that there’s some serious worry on his part.

“I’m good; I feel the same as earlier. Yeah, I respect him, and he respects me; I was cool,” said Dillian Whyte to the media moments after weighing in at 253.25 lbs on Friday.

“I never had any problems with him in the first place,” said Dillian about Fury. He respects me, and I respect him; we’re both fighting men. A few things were said, but that’s it; we’re ready to fight.

“I come to fight; I always come to fight. Yeah, I’m going to go inside and sit down and take it easy, Man. I always exchange it with my opponents, so it’s all good,” said Whyte about him exchanging hats with Fury during the face-off. I don’t know; I might wear it.

“You know me; I always come to bring war; nothing changed. I come to give it my all, and that’s it.

“I don’t remember what was said,” Whyte remarked when asked what was said with Tyson during the face-off. “We just said, we’re ready and let’s go, and that was it.

“I’m confident of beating him and getting the victory any way possible. KO, points, or whatever,” said Whyte.

WBC mandatory challenger Whyte is finally getting his long-awaited world title shot against champion Fury, and he plans on making the most of his opportunity.

NEXT: Canelo vs. Bivol – “You’re going to see the unexpected on May 7th” says Joel Diaz

Papers: Man Utd have 'no desire' to extend Pogba contract