‘I could have died…. now I’ve started loving rugby again’

It was the Oreo waffle and ice cream that team-mate Poppy Cleall had delivered to the hospital, and the McDonalds treat from her dad kindly handed over by a nurse dressed head-to-toe in protective equipment, that helped in some small way to lift Rosie Galligan’s spirits back in September 2019.

Isolated in her room, Galligan was still processing how her life had been turned upside down in a matter of days. After starting vomiting and losing all strength in her legs one evening, the England and Harlequins lock’s condition spiralled. By the morning she was blue-lighted to A&E and swiftly diagnosed with meningitis.

“I was put into my own room, in quarantine, because of how contagious it can be,” Galligan told Sky Sports. “I can’t fault the NHS. They basically saved my life. They said if I came in one day later, I could’ve been amputated from the waist down. It’s just a bizarre feeling that now I’m sitting here with no long term conditions from it. I feel very grateful.”

The messages of support were a great source of warmth to Galligan and, after 11 days in hospital, she was discharged. Yet little under four months later she would be having emergency treatment again – this time for a career-threatening injury sustained on the rugby pitch.

Galligan had played three matches as she continued to build her recovery when she fell in a line-out during a Premier 15s match against Worcester. The injuries were extensive. As well as shattering her ankle bone, she fractured a bone in her leg and ruptured three ligaments.

Looking back, the 23-year-old reflects that maybe she shouldn’t have been playing so soon after meningitis.

“In hindsight I probably wasn’t ready, but I was match fit and available for selection. At that point, life was just getting through day-by-day, but then I got dropped in a line-out and I was sitting on the floor on gas and air and I said ‘Rosie, this is now your time to completely switch off’.”

She has watched back the incident but admits it is “quite traumatic”. Even now serious injuries on the pitch sustained by others – such as the broken leg suffered by England team-mate Abby Dow against Wales two weeks ago – “takes you back”.

“People tell me ‘Rosie, stay in the moment and stay focused’. I’m glad to have people around me to support me and help me through it.”

Saracens, where Galligan was playing at the time of her life-threatening illness and serious injury, and her close-knit friends and family, were all on hand to help her rebuild her career – and life.

“I have to say a massive thank you to my family and (England team-mate) Zoe Harrison’s family too. Because, if it wasn’t for them, I wouldn’t have been able to get back (after injury) as quickly as I did. 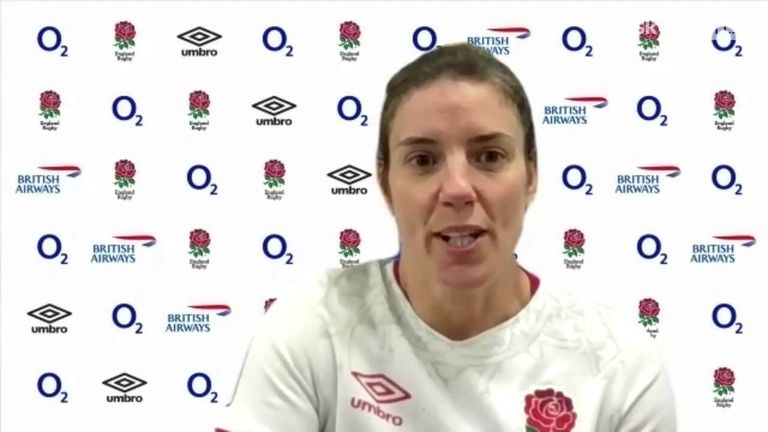 England captain Sarah Hunter described a record attendance for their Six Nations match against Wales as a turning point in the women’s game.

England captain Sarah Hunter described a record attendance for their Six Nations match against Wales as a turning point in the women’s game.

“Saracens were phenomenal. But the support my friends and family gave me on the down days, just everybody chipped in because I don’t think anyone really realised at the time that I could have died. I think it was that realisation that when I did come back playing was ‘oh my gosh, you’re here’.”

After leaving Saracens for Harlequins last summer, Galligan’s rugby career has noticeably kicked on. So much so that she earned a recall into the England squad for the Six Nations campaign, and won her second cap over 1,000 days after making her debut against Ireland in February 2019.

Having started in the 57-5 win over Scotland in Edinburgh, the 74-0 triumph in Italy and got a 15-minute run-out in the 58-5 victory over Wales in front of a record crowd for an England home match of 14,689 at Kingsholm, Galligan is looking to add to her four caps against Ireland this Sunday at Welford Road, Leicester.

“This season I’ve started loving rugby again,” Galligan adds. “Moving to Harlequins has given me the time to reflect and become the person I wanted to be both on and off the pitch.

“I probably didn’t realise that I’d lost a little bit of myself after my injury and illness so it was a moment to regather my thoughts and set my goals.

“With sport you’ve got to realise that you could get an injury, or not be able to play tomorrow, so I’m taking every opportunity and playing with a smile on my face. People say that when I’m on the pitch I look like I’m having the time of my life.”

Galligan is also using her platform to educate others about meningitis and how to spot signs of the infection.

“I work with a meningitis charity now, because I just want to show it can happen to anyone. I hope to educate people of my age to inform them of the symptoms and understand what meningitis is. It’s something that’s really important to me.”

Despite the setbacks and the trauma, Galligan now appreciates savouring the ‘small wins’ and the moments that helped bring normality back to her life, like the day she was discharged from hospital.

“By the 10th day of being in hospital with meningitis I was ready to go home and ordered a discharge outfit.

“Me and my mum were scrolling through Asos and I was like ‘that’s what I want to wear when I leave hospital’. It was just a nice casual jumpsuit, but it was just good to feel a bit of normality.” England lock Poppy Cleall has described the side as ‘incredible’ as they target a fourth successive Six Nations title.

England lock Poppy Cleall has described the side as ‘incredible’ as they target a fourth successive Six Nations title.

Looking towards the end of the Six Nations campaign, a potential Grand Slam decider awaits with France next weekend, and the potential for further celebration.

“It’s my birthday when it’s the France game. I hope it’s a birthday party and a big celebration. Hopefully we have a good few weeks ahead.”

The icing on the cake would be a place in the World Cup squad for the tournament in New Zealand later this year, and on current form, you wouldn’t bet against it.

“I’m trying to take every opportunity I can. There’s a lot of talent in this group, and a lot of talent that hasn’t made this 30-player squad. But going to the World Cup would be a dream come true.”

Fury, Whyte, AJ? Wallin 'ready' for any of them