Leclerc fastest as Ferrari dominate in wet before Friday qualy

Charles Leclerc was fastest ahead of team-mate Carlos Sainz as Ferrari produced a dominant showing in a wet first practice session at the Emilia Romagna GP.

The world championship leader’s time of 1:29.402 was almost 0.9s clear of Sainz, with Max Verstappen a further 0.5s back for Red Bull, ahead of qualifying later on Friday in Imola that will set the grid for the first Sprint of the season on Saturday.

In a session which saw cars regularly spinning and struggling to stay on track in the challenging conditions, Haas were the surprise package as Kevin Magnussen and Mick Schumacher finished fourth and fifth respectively ahead of the other Red Bull of Sergio Perez.

Meanwhile, it was another disappointing showing for Mercedes, with George Russell 10th and Lewis Hamilton 18th – and seven seconds off Leclerc’s time – as the Silver Arrows once more failed to compete with their rivals.

There was plenty of intrigue going into the session as Formula One’s all-new 2022 cars faced genuine wet conditions for the first time, but ultimately Leclerc’s early-season dominance was only exaggerated as Ferrari coped best with the wet and cold track at the Italian team’s home GP. 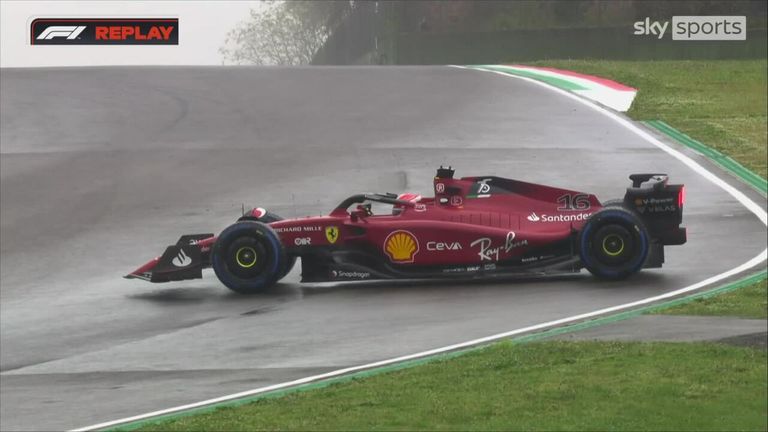 As the session began with all the drivers using full wet tyres, it initially appeared as though Ferrari and Red Bull would be closely matched once more, but a change to intermediates midway through saw Leclerc ascend to a league of his own.

The Monegasque, who holds a 34-point lead at the top of the world championship after winning two of the first three races of the season, appeared to be struggling to master the conditions as he spun on several occasions, narrowly avoiding what could have been a costly clash with the wall in one instance. However, that incident appeared to sharpen Leclerc’s focus, as with the session entering its final quarter, he produced a lap that even his team-mate Sainz couldn’t come close to.

While drier conditions are possible in qualifying and could alter the landscape later on Friday, the 1.4s by which Verstappen trailed Leclerc will be of major concern to Red Bull, who have previously been closely matched with Ferrari.

WSL previews: Everton vs Arsenal, Tottenham vs Chelsea and more

Hayes dismisses Chelsea exit talk: ‘There’s nothing to talk about’

Hayes dismisses Chelsea exit talk: ‘There’s nothing to talk about’