There are plenty of key places up for grabs in the Scottish Premiership with less than a month of the season left.

The league has concluded for the split, which will then see the top six and bottom six separated and booked in to face off over the final five games of 2021/22.

Despite Rangers being comfortable champions in 2020/21, their grip on the title looks in danger of slipping away and into the hands of bitter rivals Celtic. Ange Postecoglou’s side currently possesses a commanding lead at the top with five games remaining, as well as a far superior goal difference than their Glasgow adversaries.

Elsewhere, there’s a race for European places, and to avoid being relegated to the Scottish Championship. A snapshot of each race follows below.

Tables updated as of April 22

We have an interesting Scottish Premiership title race on our hands this year – one that many prominent faces within Scottish football didn’t predict. Rangers won the league at a canter last time out, going unbeaten and finishing 25 points clear of downtrodden rivals Celtic under Steven Gerrard.

Fast forward a year, and Ange Postecoglou has his Hoops side sitting pretty, mostly thanks to recently defeating Rangers at Ibrox in a pulsating 2-1 victory. 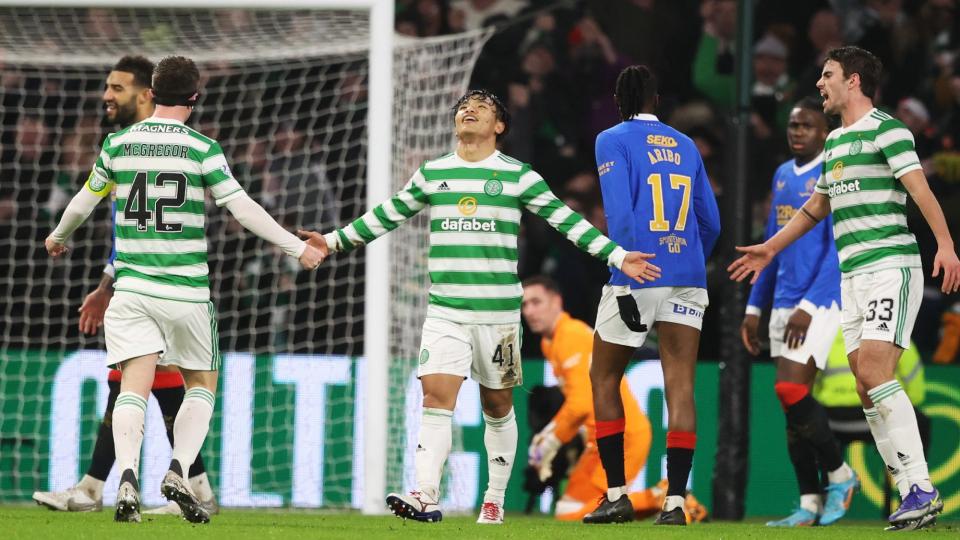 Celtic also have a convincingly superior goal difference at the time of writing, though will meet their rivals again at Parkhead after the split. The exact timeframe of this fixture has been set for the 1st May, it could have a significant bearing as to where the destination of the Scottish Premiership trophy lies this season.

The eventual title winners will gain huge rewards in both a footballing and financial sense, as they are all-but certified to enter the UEFA Champions League group stage phase due to Scotland currently being 9th in the UEFA coefficient rankings.

This scenario will happen as long as the 2021/22 Champions League winners also qualify from their league, with only Villarreal currently still in the competition and outside of the Champions League slots in their domestic top-flight.

Meanwhile, 2nd place will retain a shot at the Champions League by entering in the second qualifying round.

Rangers could also enter the group stage if they win the Europa League, of which they are in the semi-finals.

The 3rd- and 4th-placed sides in Scotland will enter the Europa Conference League at the third and second qualifying rounds, respectively, in 2022/23. Heart of Midlothian are guaranteed third place due to being 16 points ahead of Dundee United with five games to go.

There also could be further European drama, as the winners of the Scottish Cup will qualify for the Europa League playoff round. Hearts will compete in the final of the trophy, playing either Celtic or Rangers on May 21 in the showpiece decider.

If either Celtic or Rangers were to win the Scottish Cup, the Europa League playoff position would be granted to the best-placed league finisher and create a drop-down effect.

Hearts would claim the Europa League berth as they are guaranteed to finish 3rd, securing continental group-stage football for the first time since 2004/05 as they would drop into the Europa Conference League group stage if they were to suffer defeat in the playoff round.

In that case, 4th and 5th would assume the league path Europa Conference League qualifying slots.

St Johnstone and Dundee are both finished in the bottom six and currently occupy the bottom two places, in 11th and 12th, respectively.

The bottom-placed side at the end of 2021/22 will be relegated to the Scottish Championship, with Dundee being given a 95% chance of going down according to football prediction experts FiveThirtyEight.

The second-bottom side – St Johnstone at present – will be thrust into a two-legged playoff against the Scottish Championship playoff winners to fight for the right to play Scottish Premiership football the next year.

Ross County, Livingston, Aberdeen and St Mirren may well be brought into the picture for the relegation playoff if they go on a losing run.

Why did the Scottish Premiership split in two?

There are many disputed reasons as to why the Scottish Premiership elects to split into two for the final run-in. Officially, it is to prevent the need for a 44-fixture calendar which would see every team play each other four times over the duration of a campaign.

It prevents congestion in an already jam-packed calendar, although it has received mixed reactions over the years from fans. Extensive league reconstruction talks were held in 2020, however, no such agreement was reached, meaning it will stay in place for the foreseeable future.