‘A fairy tale’ – the story of Forest Green’s promotion

With Forest Green having secured promotion to League One for the first time – following a goalless draw with Bristol Rovers at the Memorial Stadium – we speak to those close to the action to explore the impact of an historic moment in Rovers’ history.

The club – who were only promoted to the EFL for the first time in their history after winning the National League play-offs in 2017 – have ambitions of reaching the Championship and have now inched closer to realising that eventual dream.

Promotion comes after they fell to a dramatic defeat to Newport in last year’s play-off semi-finals, which came two years after a semi-final defeat against Tranmere. It also marks a remarkable first season in professional football management for former Wales international Rob Edwards.

Here, we hear from reporter Laurie Martin and fan Chris Latham, who explain the impact of promotion… 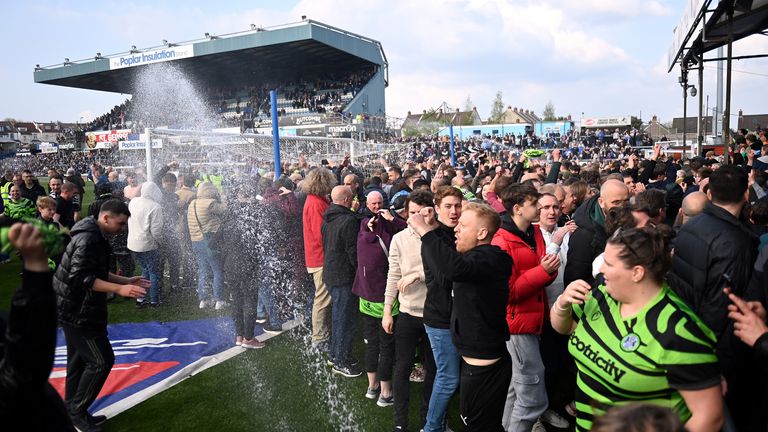 Forest Green Rovers fans, players and staff celebrate earning promotion to League One for the first time in the club’s history.

“Forest Green have been a joy to watch this season. Rob Edwards, his staff and players have achieved something very special in a short space of time.

“The first week of the season set the tone for what was to come – winning the opening game of the season against Sutton in stoppage time, before beating Bristol City on penalties in the Carabao Cup. Edwards has brought a swashbuckling style to The New Lawn, playing an attacking 3-4-1-2 system, which sees Rovers as the division’s top scorers.

Forest Green’s rise through the pyramind

“This is largely the same group of players that Mark Cooper had available to him last season, but Edwards has brought the very best out of every individual. He gave everyone the chance to impress during pre-season, which pumped belief and confidence into each player. It was a clean slate for everyone.

“Look at Matty Stevens, for example. Last season he played 170 minutes for Forest Green, was loaned out to Stevenage in January, and some wondered if he might move on last summer. Edwards gave him an opportunity, he’s scored 27 goals in all competitions, and could well have won the golden boot had it not been for his season-ending ACL injury that he sustained at the start of April.

“He’s also given the players a lot of freedom. In pre-season, he had a phone call with every player, asking them where they feel their best position is and what formation they felt as though they should play. Every player speaks highly of his man-management skills.

“Having played until fairly recently, and having coached Wolves and England youth teams before joining Forest Green, he understands how to connect with players. He’s clearly a talented coach, but he has empathy and good communication skills – which he sees as being just as important.

“He’s also built up a wonderful rapport with the supporters, which was something seriously lacking under his predecessor.

“Stroud isn’t a football mad area, and Forest Green are one of the smaller-supported clubs in the EFL, but it means everything to the fans. Some fans still can’t believe Forest Green are in the Football League, so next season really will be a real ‘pinch me’ moment when Rovers are facing ex-Premier League giants on a fairly regular basis. Forest Green will comfortably be the smallest club in League One, and they will relish coming up against the big boys next season.

“It’s fairy tale stuff for fans of certain generations. Forest Green did the double 40 years ago – winning the FA Vase at the old Wembley against Rainworth Miners’ Welfare and topping the Hellenic League. That just emphasises how far the club has come both under Dale Vince, and Trevor Horsley before him.

“Obviously, when Vince joined the club, he made his intentions and ambitions very clear, and it’s well-publicised that reaching the Championship is his goal. Rovers have been knocking on the door of League One for a few years, but they’ve suffered play-off heartbreak on two occasions, and just haven’t been able to get over the line.

“Some might take a look at Forest Green winning promotion and just throw the ‘moneybags’ tag at them, but those days are gone. Rovers still have a healthy and competitive budget, reported to be the eighth highest in League Two, but it’s not like the days when they overspent on experienced players in the National League.

“Rovers have the third youngest squad in the division and director of football Rich Hughes has developed a clear recruitment policy of buying young players either from non-league or released from Premier League & Championship academies, developing them, and then selling them on. They’re going about things in the right way.

“Forest Green have been on an upwards trajectory for quite a while, and the ambition is to make the Championship, but firstly, it’s going to be some ride in League One. When Rovers were promoted to League Two, it was like ‘wow, we’re going to be playing Notts County, Swindon and Coventry’, but next season it’ll be Derby, Ipswich and probably one of Sheffield Wednesday or Sunderland. It’s a different kettle of fish entirely.

“Next season will be the most historic in the club’s 133-year history, and it’ll be all about staying up in the third tier. Rovers can definitely take inspiration from local rivals Cheltenham, who have survived with ease on their return to League One.

“Structurally, the club feel as though they’ve been operating as a League One outfit for the last couple of seasons, so there is definitely confidence from within that they can give life in the third tier a right good go. They will certainly ruffle a few feathers next season.

“Promotion is wrapped up, and of course that is a wonderful achievement, but after being top of League Two since September 11, lifting the title really would round off the season perfectly.”

‘We are a club from the local county leagues; to be in League One is incredible’

“What an unbelievable season it has been – words probably can’t do it justice – I was confident that we would build on our recent play-off appearances, but I wasn’t expecting it to be quite this good! For most of the season we have been relentlessly good and it’s been a joy to watch. Positive attacking football built on a strong defence has made us a very consistent both home and away.

“We may have lost in the play-off semi-final last season, but Jimmy Ball ignited something in the club and created a real sense of unity and purpose. Rob Edwards and his coaching staff have built on that and taken it further. The coaches and players have spoken of learning from the experience of the play-offs and not wanting to leave it to chance this time and I think they have backed that up on the pitch. It’s been quite incredible to watch.

“Rob has created an environment that every fan dreams of. The fans, players and coaching staff hold a really special bond. It’s a really positive, friendly and fun place to be, but alongside that there is a tremendous sense of responsibility and honesty when things don’t go as well as would like. Edwards has a really bright future ahead – the sky is the limit.

“Promotion is a fantastic achievement. We are a club from the local county leagues with a unique history compared to many other EFL clubs. We were the first club to reach the FA Vase and Trophy final and we will be in League One next season, which is quite simply incredible.

“Initially, I was a little sceptical about the club’s plans to challenge higher up the divisions, but in recent years I think Dale Vince has shown a really clear vision and shown he can deliver on it. He has given a clear identity to our footballing style and wider culture of giving young players a chance. He gives his managers support, but importantly gives them time and space to achieve. Dale deserves much more credit for the way he runs the footballing side of the club.

“We can’t wait to take in more new clubs next season and it shows why English football is so special with our football pyramid making it possible for clubs to work their way up. As a fan, it’s priceless to witness the progress and for the club it will also mean the important environmental messages will reach a wider audience.

“The new training facilities are a really important milestone, too, with the club soon able to unite the men’s, women’s and academy teams in one place. The stadium will also take us to a ground which is sustainable as an EFL ground and it looks like a really brilliant place to watch football. The future is very exciting – Forest Green in the Championship? It’s not if, but when.”