Bayern Munich can win the Bundesliga title when they host Borussia Dortmund at Allianz Arena this afternoon in a top-of-the-table clash between the two familiar rivals, in which the visitors will be desperate to spoil the party.

The German heavyweights start the match, known as Der Klassiker, separated by nine points with four games of their league seasons remaining, although Dortmund have exactly matched Bayern’s Bundesliga record during 2022 so far.

For Bayern head coach Julian Nagelsmann, the most high-profile domestic home game of his side’s campaign is a chance to win his first league title since being appointed in July 2021, as well as to exorcise some of the pain of being knocked out of the Champions League at the quarter-final stage, by Villarreal at the Allianz on April 11.

The two best-known frontmen in the top flight, Bayern’s Robert Lewandowski and Dortmund prodigy Erling Haaland, have inevitably gained many of the pre-match headlines, their prolific presences at either end of the pitch adding to the anticipation ahead of what should be a compelling contest.

52nd min.: Goal for Dortmund! BVB are back in it, Emre Can sending his spot kick to Neuer’s right as the goalkeeper guesses the wrong way. That wasn’t the most expert penalty you’ll ever see – Neuer would almost certainly have saved it had he moved in the correct direction, such was its centrality – but it’s enough to make Rose slap his hands together in his technical area. His side will believe the comeback is on!

50th min.: Penalty to Dortmund! Brandt has revenge for that foul by Pavard, scampering down the left and playing a ball inside the penalty area to Reus, who is clearly impeded by a clumsy Kimmich challenge!

47th min.: Brandt wins the ball and drives forward through the middle towards the halfway line. Pavard appears to catch him heavily with a sliding tackle from behind, although no foul is awarded. Rose gives his side of the situation to an official.

46th min.: We’re back! Bayern start us off this time, knowing they are 45 minutes from lifting the title at home. Nagelsmann’s side immediately set off on the attack, although it comes to nothing as Dortmund clear.

Half-time – Bayern Munich 2-0 Borussia Dortmund: Title wins are often dramatic. Bayern, however, are on their way to their tenth straight triumph – sorry Dortmund fans – with the minimum of fuss, based on that first-half performance.

BVB are yet to have a shot on target, while there was no keeping out Gnabry’s piledriver, nor Lewandowski’s later, characteristically lethal, hit. And here it is.

45th min.: The hosts deal with a few Dortmund attempts to move forward. Goretzka fouls Bellingham just beyond the halfway line, and the England international goes down clutching his knee, although he doesn’t look like he will be staying prone for long.

42nd min.: Nice stat from the Bundesliga: Gnabry’s 13 goals in this season’s competition make him the top scorer of any German this season – and he’s hit double figures in all six of the Bundesliga campaigns he has featured in.

40th min.: Dortmund are still toiling, with Bayern keeping them at bay comfortably. They’ve had two shots so far, both of which were off-target.

37th min.: Coach watch: Rose threw his bottle to the floor after watching Lewandowski tuck that second goal went in, while you can probably guess how Nagelsmann reacted. Meanwhile, let’s take a look at that glorious opener.

35th min.: Two shots on target, two goals. Ruthless Bayern pounced after Dortmund lost possession in a dangerous area through Zagadou, affording Muller the chance to locate Lewandowski on the right of the penalty area.

The Bundesliga top scorer slips away from Akanji and curls a shot beyond Hitz as the plunging goalkeeper dives to his left in vain. Twenty-three in 16 for Lewa against his former club!

31st min.: The goal is ruled out for offside! There was a touch of fortune about Gnabry slotting in from the right side of the penalty area there, as Dortmund thought they had thwarted a Bayern attack from the opposite flank, only to see the ball roll through to the livewire. BVB will feel some justice has been done.

30th min.: Bayern have a second, Gnabry has a second! There’s a VAR check, though…

27th min.: Chance for Dortmund! Haaland breaks free inside the penalty area on the left, only to drag a low shot wide of the near post from close range. Suffice to say, he’ll feel he should have done much better from there.

25th min.: Gnabry’s stunner barely featured on the xG radar. It was a strike out of nothing, set up by wonderful control.

23rd min.: Haaland has been well-restrained by Bayern during this first half so far. Bellingham tries to combine with the Dortmund top scorer, but tight marking allows Neuer to collect again.

17th min.: That was some goal. Nagelsmann craned his head back in that familiar style of a hopeful head coach when a corner comes in, then raced down the touchline in celebration. Perhaps showing a deserved level of increased confidence, Gnabry just surged down the right and looped over a cross that Bayern could not capitalise upon.

15th min.: Bayern have the lead with a glorious goal! Kimmich swings in the corner from the right, where a Bayern head nods it back to Gnabry. The winger controls it on his knee just outside the penalty area and slightly to the left of centre, then rockets a volley into the right-hand corner of the helpless Hitz’s net. That is a sensational strike!

12th min.: Both sets of fans seem to be making themselves heard even more than usual this evening. There appear to be home supporters with scarves tied around their heads everywhere. Their heroes win a corner on the right.

10th min.: Bayern are having the better of possession now, advancing unsuccessfully into the penalty area on several occasions. That’s less of a concern when you have a line-leader in Lewandowski, who has scored 22 times in 15 editions of this fixture.

8th min.: This has been a quiet start to the game, albeit with plenty of slick passing. Coman finds space inside the Dortmund penalty area on the left and clips an attempted pass behind.

5th min.: Almost a first sight of goal for Haaland, who tries to change on to a low ball through the centre. Neuer is out quickly to claim just inside his penalty area.

3rd min.: Dortmund have looked more dangerous in the early exchanges, Bellingham showing his usual burst of pace in an attempt to rampage through the centre early on. Lewandowski has had a touch just outside the visitors’ penalty area in a central position, only managing to poke the ball out of his control.

1st min.: We’re underway! Dortmund, in those familiar yellow and black colours, start us off, attacking from left to right. Bayern, in their home kit of red and white, watch their arch-rivals keep the ball for the first minute or so.

5 mins to KO: Here’s how some of the players looked a few minutes ago. Legendary goalkeeper and Bayern CEO Oliver Kahn has been shaking hands in the stands. The players are in the tunnel, and both sets of fans are building the cacophony to a crescendo. We’re almost ready to go!

10 mins to KO: Such has been Bayern’s dominance of German football, it would make a certain sense to expect them to win the title at the first time of asking this evening.

A glance at these teams’ records in the calendar year so far suggests it won’t be so simple: the rivals have each earned 29 points since the start of 2022, with Bayern scoring two more than Bayern’s 33 goals.

20 mins to KO: The away fans are here. Dortmund are unbeaten in seven on their travels in all competitions, winning four times.

30 mins to KO: Stranger things have happened in football than a game involving Lewandowski and Haaland heralding a goalless draw, but it feels less dangerous than usual to suggest that there should be goals today, not least because of the title-winning and party-pooping incentives at stake as Bayern eye a tenth straight title.

For anyone struggling to keep track, Lewandowski has 32 so far, with Haaland’s 18 including two in Dortmund’s 6-1 savaging of Wolfsburg last time out. Eighteen-goal Haaland is chasing Patrik Schick, the Leverkusen forward whose 21 goals put him between the Norway sensation and Lewandowski at the top of the Bundesliga charts.

40 mins to KO: Here’s how Bayern begin, with Hernandez and Coman in the XI and Lewandowski in attack after he missed training on Thursday. Will this XI prove to have started on a famous evening in the club’s history?

50 mins to KO: The 106th Bundesliga meeting between these sides sees Bayern on the brink of a record-extending 31st domestic league title. They can only seal it today, though, with a win over their arch-rivals. Dortmund love winning here under any circumstances, but denying Bayern glory at this stage would enhance BVB’s temporary bragging rights, even though only a complete Bayern collapse during their last three matches would give their visitors this evening any hope of the unlikeliest of comebacks at the summit. Here’s their starting XI.

1 hour to KO: Welcome to The Sporting News’ live coverage as Bayern Munich have their first chance of the season to win the Bundesliga title – a 10th in a row – against closest rivals Borussia Dortmund in Der Klassiker. 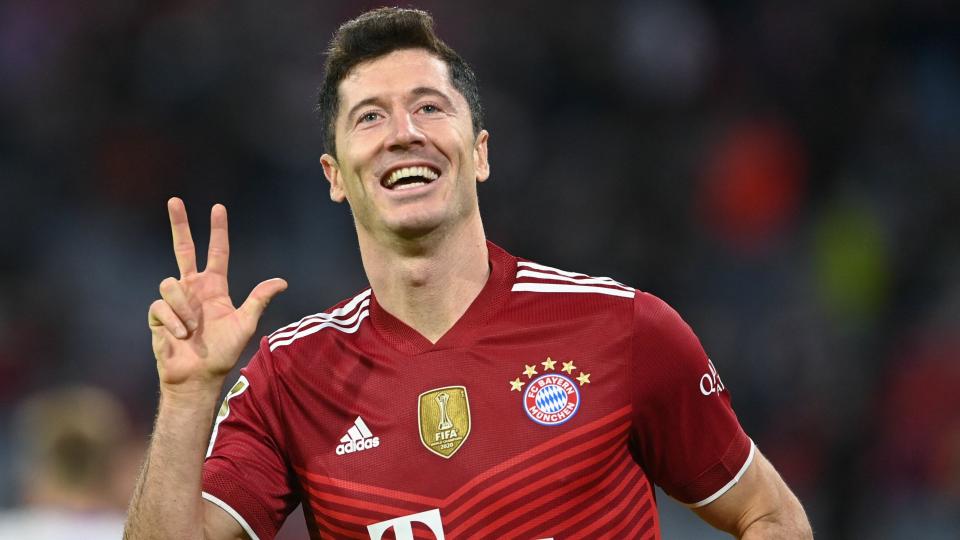 MORE: Is Julian Nagelsmann going to manage in the Premier League?

How to watch Bayern Munich vs. Borussia Dortmund

Saturday’s top-of-the-table Bundesliga match between Bayern Munich and Borussia Dortmund from Allianz Arena will be broadcast on FS1 (English) and Univision and TUDN (Spanish) in the USA.

It can also be streamed on fuboTV and new users can take advantage of a free trial.

UK: Sky Sports subscriptions start at around £41 per month on an 18-month contract. Viewers can also watch on Now for £9.99 per day or £25 for three months.