Oldham have been relegated from League Two after suffering a 2-1 defeat to Salford City, ending their 115-year stay in the Football League.

A 79th-minute pitch invasion by protesting Latics fans initially halted proceedings with Salford leading 2-1 and the club’s relegation rivals Stevenage and Barrow both leading in their fixtures.

Both sets of players were escorted off the field by referee Bobby Madley, with the last of the protestors then not leaving the pitch for almost an hour.

After an initial announcement over the tannoy that the game had been abandoned, the EFL later insisted it must restart, which it did at 6.28pm behind closed doors.

Oldham, who had issues with pitch invasions earlier in the season, are now likely to face severe punishment from the FA and the EFL.

Earlier, furious fans chanted “We want our club back” and “We’re not going anywhere” as stewards struggled to maintain order. 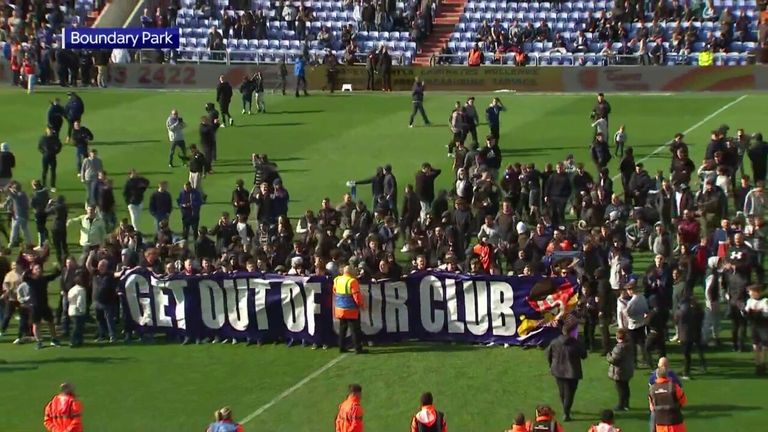 Play was held up at Boundary Park where Oldham Athletic fans protested against the ownership of the club.

A confirmed fourth straight loss also means Oldham are the first former Premier League side to drop out of the league.

Salford, meanwhile, remain on the fringe of the play-off picture.

After Oldham’s Junior Luamba planted a free header wide early on, Salford replied by opening the scoring in the eighth minute.

Oldham levelled in the 33rd minute when Davis Keillor-Dunn converted a penalty after his initial goal-bound strike appeared to strike the arm of Jordan Turnbull.

Hallam Hope headed against the crossbar for the home side before Salford struck again in first-half added time when Thomas-Asante headed home Ibou Touray’s cross.

Hope forced Salford goalkeeper Tom King into a smart diving save on the hour, while Kyle Jameson headed narrowly off target.

With Stevenage and Barrow in front meaning Oldham were effectively down, fans then invaded the pitch and the players were taken off.

Neither club issued any further reaction to the awful scenes after the game was finally completed at 6.43pm, but the EFL did release a statement explaining the decision to restart the game.

A spokesperson said on the EFL Communications’ Twitter account: “This afternoon’s Sky Bet League Two fixture between Oldham Athletic and Salford City has been concluded behind closed doors.

“Despite the earlier announcement of the abandonment of the fixture, after discussions with both clubs, match officials, and stadium security it was agreed the match could be concluded today.

“The decision was taken in order to maintain the integrity of the competition given the importance of the fixture at both ends of the League Two table.”