If PSG felt any frustration at not winning the Ligue 1 title following Marseille twice coming from behind to beat Nantes in midweek, the potential joy of winning a record-equalling 10th French title at home against Lens should soften the blow.

In a sometimes-underwhelming season, Lionel Messi will win Ligue 1 in his first season at PSG if his new club beats high-flying Lens, who will be motivated to cause an upset and help their bid to qualify for a European competition next season, sitting three points outside those places.

PSG won 3-0 at Angers on Wednesday to seal a fourth successive win in a domestic campaign during which their supremacy has been almost absolute, putting them 15 points clear of Marseille with five games of the season remaining.

There are warning signs, though: Lens arrive on a fine run of form, winning their last three matches by an aggregate score of 7-1, including a 2-1 victory at reigning champions Lille on their last away trip.

MORE: How PSG can win Ligue 1

43rd min.: Captain Fofana is leading by example for Lens tonight. RC threaten again, Fofana cutting inside from the left on the edge of the penalty area and rattling an arcing shot high and wide of the diving Navas’s far angle.

41st min.: Clauss has had an immense, assist-laden season for Lens, and he has a wonderful opportunity to test Navas from inside the penalty area on the right. His low strike, alas, is easy for the goalkeeper.

39th min.: Messi has found his passing range. He plays a couple of exquisite balls during an attack down the left, the second of which allows Mbappe to race into the penalty area.

It’s a familiar story for PSG once Mbappe bears down on goal, though: the finish is high over the angle.

37th min.: A PSG corner from their left comes to nothing. You could describe the atmosphere tonight as mixed; we’ve seen in recent weeks that the Paris fans still seem to be unimpressed with their squad’s efforts this season, perhaps still feeling frustration with their early Champions League exit.

A few jeers are definitely ringing out at times, and it hardly feels like a cauldron of excitement when PSG attack. There again, if those forays forward were more incisive, the cheers would inevitably follow.

35th min.: Messi shows his vision, almost releasing Hakimi clear on goal on the right. Leca, again, is out quickly to clear the danger. The goalkeeper has performed well without being greatly troubled so far.

33rd min.: End-to-end entertainment: Mbappe glides through at breakneck speed, then hammers a shot over the crossbar from inside the penalty area. Kalimuena responds with a similar move in front of the PSG goal, but his low finish is easy for Navas to gather. He should have given the goalkeeper more to do there.

31st min.: Messi goes close for the first time tonight! The Argentina captain finds space inside the penalty area on the left, and his cross-shot is pawed away by Leca. Tricky to tell whether that would have ended up in the far corner of the net; more certain that no PSG player – Neymar being the prime candidate – was in place on the left to tap in.

30th min.: Mbappe twists and turns outside the penalty area on the left, playing a pass back to Verratti, who hangs a cross wide of the target. Then Kimpembe tries a shot from outside the danger zone in a central area, and Danso blocks it away.

28th min.: Verratti gifts Lens possession in a dangerous area, and Navas has to use his agility and juggling skills to stop the resulting attack causing a corner. The seventh-placed side in Ligue 1 continue to pose a threat.

26th min.: Hakimi goes close! The wideman shows his blistering pace to race clear on the right and enter the penalty area. His final touch on the run is perhaps a little heavy, giving him little choice but to shoot from a fairly acute angle, rather than cross for a teammate. Leca is out impressively quickly, diving at his feet to block the effort away.

24th min.: Neymar sends a shot wide from close range! Messi had the initial effort from the right of the penalty area, and the deflection fell to the centrally-located Mbappe, who had the awareness and speed of thought to flick possession to the Brazil striker at the far post, whose finish is, frankly, dismal.

23rd min.: Danso does excellently to thwart a rapid PSG attack down the hosts’ right, deploying an expert tackle to see the ball out. Mbappe then almost finds space inside the penalty area with a delicate touch, but can’t get a clear sight of goal.

21st min.: Lens are laying the ball around confidently, and a sequence of neat passes from their left outside the PSG penalty area provides Fofana with the chance to crash in a shot that looks like it’s heading for the target from a central position. Kimpembe shows fine timing a bravery to block the danger behind.

18th min.: The would-be champions have had almost 60 percent of the possession, but neither side has had a shot on target yet.

16th min.: Lens have another good chance! Kevin Danso is in the right place at the right time to meet a cross at Navas’s right-hand post, only managing to bounce a header wide before an offside flag is raised. More warning signs for PSG.

12th min.: Les Parisiens are toiling at the moment. A few opportunities have rolled harmlessly through to Lens goalkeeper Leca. The party is in previews at the moment, if there is going to be one tonight.

10th min.: PSG have a chance to swing a cross in from a free-kick near the penalty area on the left. A foul is adjudged to have taken place as the delivery soars into the sky, and Lens are awarded a free-kick. The hosts have not threatened significantly so far.

8th min.: That’s the closest either side has come so far! Fofana drives forward outside the penalty area on the left and fires a thunderous shot not far over the near angle of Navas’s goal.

5th min.: Lens have made a bright start here. They’re under no pressure and have European ambitions of their own to chase.

2nd min.: No prizes for guessing who has the first shot on target: Mbappe’s future is up in the air after PSG’s season ends, and the same can be said of this attempt from outside the penalty area on the left, sailing comfortably high of the crossbar. A show of intent.

1st min.: Lens start the action! They’re attacking from right to left in the first half tonight as they look to hold up PSG’s title party. Here we go!

15 mins to KO: The players are out. Marseille will need to win at Reims on Sunday night if PSG slip up tonight.

30 mins to KO: The lineups are out – and so are the teams. Will this be the matchday squad to restore PSG’s title following the frustration of the 2020/21 season?

45 mins to KO: Paris begin like this! Messi and Neymar return in their top-tier attacking triumvirate.

1 hour to KO: Here’s how Lens line up as they seek a fourth successive victory.

1 hour 15 mins to KO: Messi missed the win at Angers with an Achilles problem, while Neymar was suspended. Expect them both to return tonight.

1 hour 30 mins to KO: Lens are not to be underestimated: they won away at reigning champions Lille last time and have European football next season in their sights, starting three points shy of the fifth-placed finish required for that.

1 hour 45 mins to KO: PSG head coach Mauricio Pochettino does not want his side to wait around. “Winning the title as soon as possible is the best possible outcome,” he said, having only seen the runaway leaders denied by a Marseille comeback win on Wednesday.

“It wasn’t possible [courtesy of the win] against Angers, but we had a good game and took the three points. That’s the most important thing.”

2 hours to KO: Welcome to The Sporting News’ live coverage as PSG have their first chance of the season to win the Ligue 1 title — it would be a record-equalling 10th for the French giants — against high-flying Lens, who have won their last three games.

The major news for PSG is the potential return to the starting XI of Neymar — he missed the Angers game through a ban — and Messi, sidelined for that match by an Achilles tendon injury. Mauro Icardi (thigh), Leandro Paredes (groin), Ander Herrera (thigh), Abdou Diallo (groin), Layvin Kurzawa (calf) and Julian Draxler (knee) are all out.

Gael Kakuta remains out with a knee problem for Lens, meaning Costa continues in midfield. Facundo Medina has a thigh strain, so prospect Christopher Wooh is deputising for him in defence. 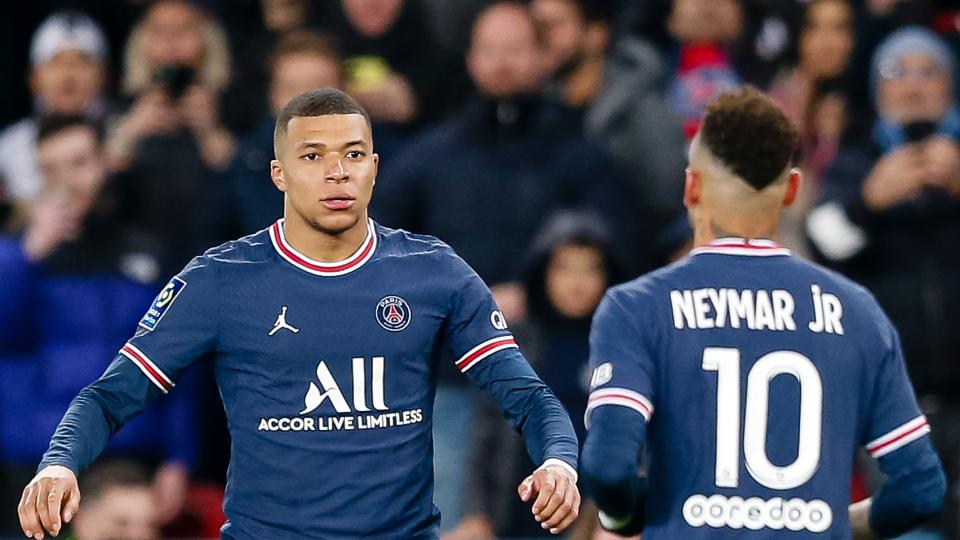 How to watch PSG vs. Lens

UK: In the UK, viewers can watch on BT Sport or via the BT Sport website or app. The broadcast begins at 7.30 p.m. BST.

Australia: Ligue 1 is also carried by beIN Sports in Australia, which can be streamed on several platforms including Foxtel Go and Kayo.

What's the Wembley attendance record? Fury vs. Whyte up against Adele, FA Cup and more