Looking back at Scottie Barnes’ rookie season, it’s hard to find many ways that it could have gone much better.

At just 20 years old, Barnes reinvigorated the Raptors franchise with the youthful exuberance of a rookie and the basketball IQ of a seasoned veteran and, as a result, was named Rookie of the Year for the 2021-22 NBA season.

When Toronto selected Barnes with the fourth overall pick in the 2021 NBA Draft, the audible gasp at Brooklyn’s Barclays Center illustrated the basketball world’s collective shock at the selection. It took him approximately 20 seconds to show just why he was Toronto’s guy, winning the hearts of Raptors fans with dance moves to Drake’s “What’s Next” and a smile big enough to see through his mask.

Everyone’s been smiling ever since.

While the 2021-22 season was supposed to be a transitional year for the Raptors, it ended up being a year of exceeding expectations. Barnes’ averages of 15.3 points, 7.5 rebounds and 3.5 assists over 74 games were paramount to Toronto finishing with a 48-34 record and the East’s fifth seed, returning to the playoffs after a one-year hiatus. It’s not often that a top-five pick has that kind of impact on a playoff team.

Of course, Barnes suffering a sprained ankle in his playoff debut is one of the things that could have gone better in his rookie season, but the injury came after he registered 15 points, 10 rebounds and eight assists — a playoff debut fit for a franchise-altering talent. Something tells me it won’t be the last time we see that from Barnes on the postseason stage, be it in the distant or near future, as Barnes will return to the lineup in Game 4 to help his team stave off elimination.

With all that Barnes accomplished in Year 1, it’s only right to call back to draft night and ask, “what’s next?”

What’s next for Scottie Barnes? 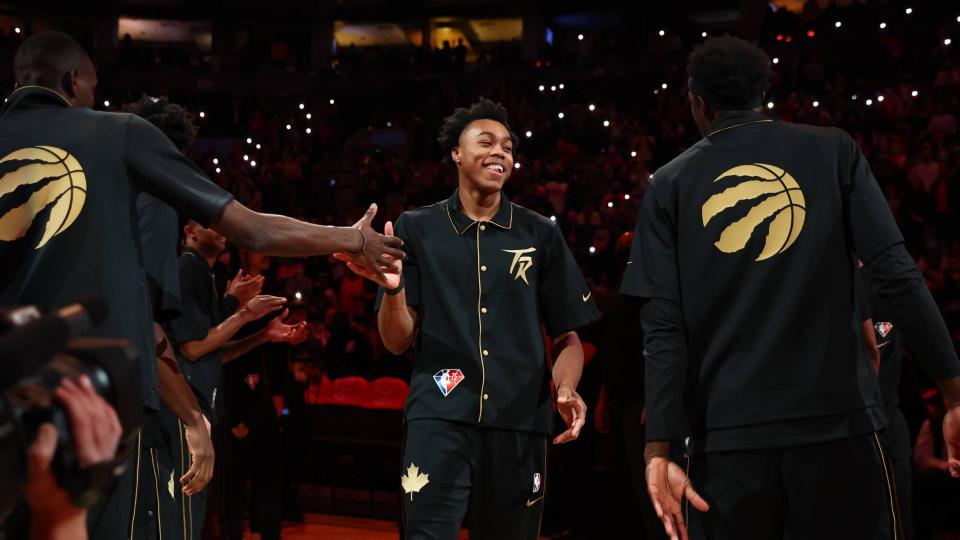 While Barnes is clearly one of one, it’s sometimes helpful to look back to the past for an idea of the future.

This season, Barnes became just the 19th rookie in the NBA’s 75-year history to average over 15 points, seven rebounds and at least 3.5 assists per game, placing his name along with the likes of Luka Doncic, Ben Simmons, Chris Webber, Larry Bird, Magic Johnson and Kareem Abdul-Jabbar, with whom Barnes has already shared the spotlight in a “Jurassic World” promo.

Pop culture aside, those baseline numbers are the starting point for Barnes, who will inevitably improve in the coming years as a result of his well-documented work ethic, the Raptors’ renowned player development program and the simple fact that the game is going to slow down for him with time.

That Barnes is only beginning to tap into his potential should be a scary prospect for the league.

MORE: Could Scottie Barnes be the next Giannis Antetokounmpo?

Coming into the league, a big question mark surrounding Barnes was his ability to shoot the ball. Sure, Barnes’ 30.1 percent 3-point shooting as a rookie leaves more to be desired, but he’s shown flashes of what’s to come, going 3 of 6 from 3 in big wins over tough opponents in the Bucks and Heat.

(Barnes sank clutch game-tying free throws to force overtime in that Heat game, too, by the way.)

Teams dared Barnes to shoot at times this season, but that won’t be something they can do in the coming years.

With improved shooting will come an improved all-around offensive game. Barnes is too strong for smaller players and too quick for bigger players to slow him down, thus resulting in a matchup nightmare.

More than just counting stats, Barnes’ offensive growth will be evidenced by his presence on that side of the floor. Early returns suggest that he could be Toronto’s go-to guy sooner or later. Just look back to his 31-point, 17-rebound, six-assist performance against the Lakers for proof.

Scottie Barnes had a CAREER-NIGHT as he tallied 31 PTS, 17 REB & 6 AST for the @Raptors!#WeTheNorth pic.twitter.com/dGm5eSV1Ir

Barnes sets himself apart with his ability to create for himself and others while cleaning the glass. And that’s just the offensive side of things.

According to the Basketball Index, Barnes is the league’s most versatile defender among players to log over 1,000 minutes of playing time during the 2021-22 season. Because of Toronto’s personnel and defensive schemes, Barnes was forced to guard one through five on a nightly basis. More often than not, he did so at a high level.

As much as defense can be credited to mentality and effort, there are elements that can only get better with time — the game can slow down on that end, too. Defense is never easy, but with a year of Nick Nurse’s schemes under his belt and a greater understanding of how defense is played in the NBA, even that will become easier for Barnes.

He has what it takes to become a mainstay on the NBA’s All-Defensive Team in the coming years.

The Raptors’ track record of development is nearly spotless. They find the right fits and develop stars, whether they’re acquired via trade, with the 23rd or 27th pick in the draft, or not drafted at all.

This time around, we get to see a new course of growth — a player that was clearly the right fit but was already a star.

Just as the Raptors shattered expectations in Barnes’ rookie season, expect Barnes to shatter expectations throughout the course of a long career with the franchise. Barnes has the potential to grow into one of the league’s scariest two-way threats and, in due time, will be the face of the organization.

The accolades — and commercials with all-time greats — will continue to follow.

MORE: Heat’s Kyle Lowry praises Raptors’ Scottie Barnes: ‘The sky’s the limit for a kid like that’

Based on all that Barnes has shown at the age of 20, the sky is the limit for him — and the Raptors.

‘Bakole is trouble for all the world’s heavyweights!’

‘Bakole is trouble for all the world’s heavyweights!’