“The game has come such a long way and I’m incredibly proud to have been part of that journey and seen how it’s grown. Pulling my match shirt on in 2008, I never could have imagined running out to thousands of people at the weekend. It’s hard to get your head around” – Emily Scarratt 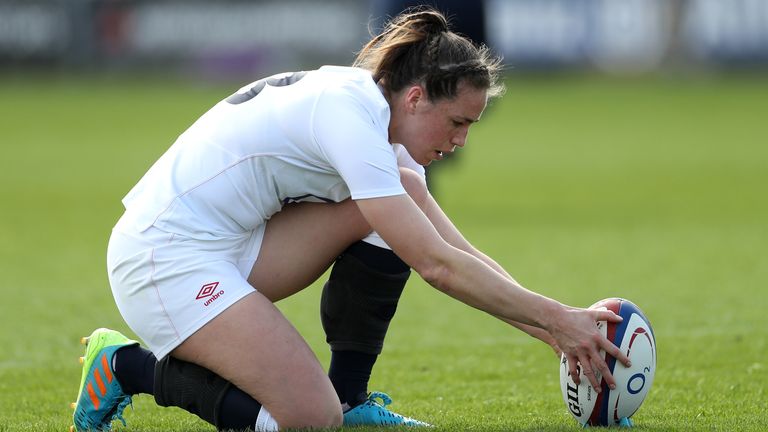 England centre Emily Scarratt says she is “incredibly proud” of the journey and growth women’s rugby has experienced, nostalgically looking back at her first cap ahead of picking up her 100th on Sunday.

The 32-year-old, who will complete a century of England appearances in this weekend’s Women’s Six Nations clash vs Ireland, tasted Rugby World Cup glory in 2014 and was named World Player of the Year in 2019.

Her career started in 2008, coming off the bench against the USA at Esher’s Molesey Road in front of a negligible crowd. On Sunday, the Red Roses will play at Welford Road in front of more than 15,000.

“It’s a little bit crazy to be honest,” Scarratt told media on Friday.

“The girls have been giving me the big one as the cap numbers have gone up in recent weeks, but I genuinely have tried not to think about it.

“I know how fragile this sport can be at times, and how you shouldn’t take anything for granted, and if I’m honest I’ll still be doing that for the next three days.

“But it’s definitely something I never set out to achieve. It’s hard to get your head around I think.

“A lot different [to first cap]. I remember being incredibly nervous. The crowd wasn’t big.

“It’s completely mad. Obviously the thought of nearly filling somewhere like Welford Road, when for my debut we played at Esher which has basically got just one stand down one side of it.

“The kit was big and baggy, the changing rooms were a bit kind of old and stuffy with just a classic bench and a hook.

“It was just completely different. When you look back on it and reflect, they were amateur days if you like, despite the fact we were obviously training and everything we did was around being as professional as we could without actually having that official title.

“I wouldn’t be able to tell you how many people would come watch, but it would be in the hundreds, as in the one-hundreds, no more than that.

“To think we’re now at over 15,000, the game has come such a long way and I’m incredibly proud to have been a part of that journey and seen how it’s grown.

“Hopefully we can continue to kick on. Pulling my match shirt on in 2008, I never could have imagined running out to thousands of people at the weekend.”

Sunday will be made all the more special by the fact that Scarratt is a Leicester local.

Growing up, she went as a season-ticket holder to Leicester Tigers games at Welford Road with her family, and were she to have chosen any arena in the world to pick up her 100th England cap, it would be where she is actually going to achieve it.

“It’s mad isn’t it? If you were to write it out and make it the best it could possibly be, this would be the script,” she added.

“I don’t know who’s writing my scripts at the moment, bit I definitely owe them a drink or two I think.

“It’s amazing. We had season tickets there when I was growing up, I played there once when I was about eight years old, when the minis all charge on at half-time and then disappear again and watch the second half.

“I’ve got some really fond memories of that place, and it’s my hometown as well, so hopefully the support will be awesome. It’s going to be pretty special.”

Having made it back from a leg break to return at the start of this Six Nations, Scarratt admits she often reflects on the possibility her life could have gone in a different direction.

At the age of 16 she turned down a basketball scholarship to the USA, while professional contracts in English women’s rugby did not come in until seven years after Scarratt’s debut.

She remembers too where she was when she received her first ever England call-up 14 years ago.

“I was on that holiday that you go on after your A-levels with all your friends, the first one without your parents, so you’re having a good time basically in Cyprus.

“And then Gary Street the coach at the time called me, and the rest of the holiday took a slightly different slant for me! I had to tone it down a little bit.

“I’m not sure I ever would have made the women’s NBA, that’s for sure! Sometimes I reflect and think if I took a different path what could have happened.

“And that’s not just with basketball, but loads of different sports or a slightly different career.

“But I am very grateful I was part of the crop that did have to work, did have to go to university, and did have to juggle things, because I think it grounds you a lot better.

“Don’t get me wrong, I would have loved a professional rugby job at 18, but sitting here now, I’m quite glad I was part of that group that didn’t and have seen the change ever since.”

Hamilton on 'underperforming' Merc: 'Each weekend is a rescue'