Fury to vacate WBC title, wants Deontay Wilder to fight for it 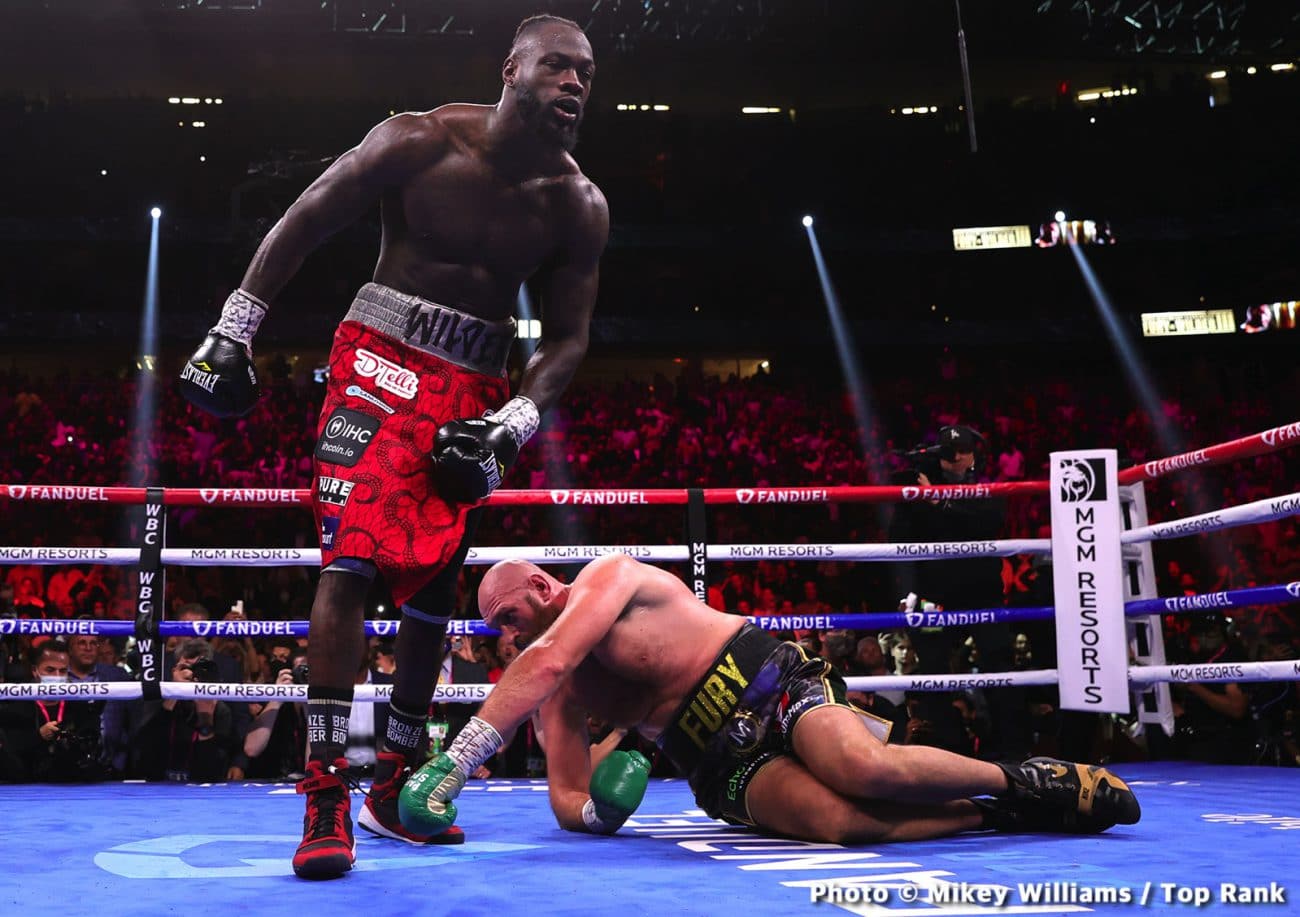 By Scott Gilfoid: Tyson Fury plans on vacating his WBC title, retiring to branch over to exhibition boxing matches & WWE and he wants Deontay Wilder to battle for his strap.

Last Saturday night, Fury (32-0-1, 23 KOs) wrapped up his 14-year professional career by stopping WBC mandatory Dillian ‘The Body Snatcher’ Whyte in the sixth round in a non-entertaining, boring fight at Wembley Stadium in London, England.

The entire card was purely awful, one of the worst this writer has ever seen in a high-profile event.

Every fight was shockingly bad, and the main event between Fury & Whyte was no exception. Two slow middle-aged-looking fighters, and not entertaining the fans.

You had to feel sorry for the 94,000 fans that had paid their money and wasted time to come watch the Fury vs. Whyte event live at Wembley because it was a train wreck from top to bottom.

For a 33-year-old, Fury looked much, much older, more like a person in their mid-40s. As such, it’s a good thing that Fury is retiring because he would surely lose badly to the winner of the Anthony Joshua vs. Oleksandr Usyk rematch.

Using a lot of holding and jabbing, Fury wore down the pedestrian-level Whyte (28-3, 19 KOs) until he walked onto a right uppercut in the round.

The fight was stopped after Whyte stumbled to his feet, staggering around the ring, leaving the referee Mark Lyson no option but to stop the contest with the condition he was in.

Unfortunately, the 36-year-old Wilder (42-2-1, 41 KOs) might not be too keen on battling for Fury’s WBC title, as the last, we heard from him, he was going on a mental journey to decide whether to continue his boxing career.

At the time, Wilder seemed less than excited about the thought of continuing his career. As such, he probably won’t be too excited about fighting for Fury’s soon to be vacated WBC title, especially if it involves a low marquee-level match against #4 Frank Sanchez.

Wilder hasn’t won a fight in three years, since his seventh-round knockout victory over Luis Ortiz in November 2019 in a rematch that few fans wanted to see.

Fury himself admitted that he doesn’t understand why Wilder is ranked #1 with the WBC, given that he’s been winless in his last three fights, but the World Boxing Council rank fighters based on their perception of their true ability rather than wins over non-notable opposition.

“I’d like to see Deontay Wilder fight whoever [comes out on top in the Joshua-Usyk second fight] for it again,” Fury said to Behind The Gloves.

“One thing, Deontay made ten title defenses, more than anybody else. He equaled Muhammad Ali’s record, beat Vitali Klitschko’s record, doesn’t get the credit he deserves.

“I do believe Deontay Wilder is still the second-best heavyweight in the world. And I believe he knocks everybody else out but me,” said Fury.

Well, regardless of whether Fury believes Deontay is #1 in the world, he doesn’t appear to be motivated to continue fighting, and he probably won’t choose to fight for the vacant WBC title if it involves a lower-paying fight against Frank Sanchez.

Wilder might go for the title of facing #5 WBC Andy Ruiz Jr. for the title, but the chances of him being the one that he would face for the strap are slim.

Most likely, Deontay would need to fight Sanchez, Joseph Parker, or Joe Joyce for the WBC strap, and those wouldn’t bring him the kind of money that he’s been routinely getting for his mega-fights against Fury.

As for Fury, he says he plans on fighting UFC heavyweight Francis Ngannou next. It’ll be an exhibition match between Fury & Ngannou as there’s no chance a mismatch like that would be sanctioned by any boxing commission.

Fury used a good portion of his post-fight interview last Saturday night to begin promoting his exhibition match against Ngannou, and you imagine it’ll be sold on PPV.

It’s wretched that Fury is following Floyd Mayweather Jr’s lead in branching over to exhibition matches, particularly with him saying he doesn’t care about money.

NEXT: Jaime Munguia to fight Danny Jacobs next in catchweight at super middleweight