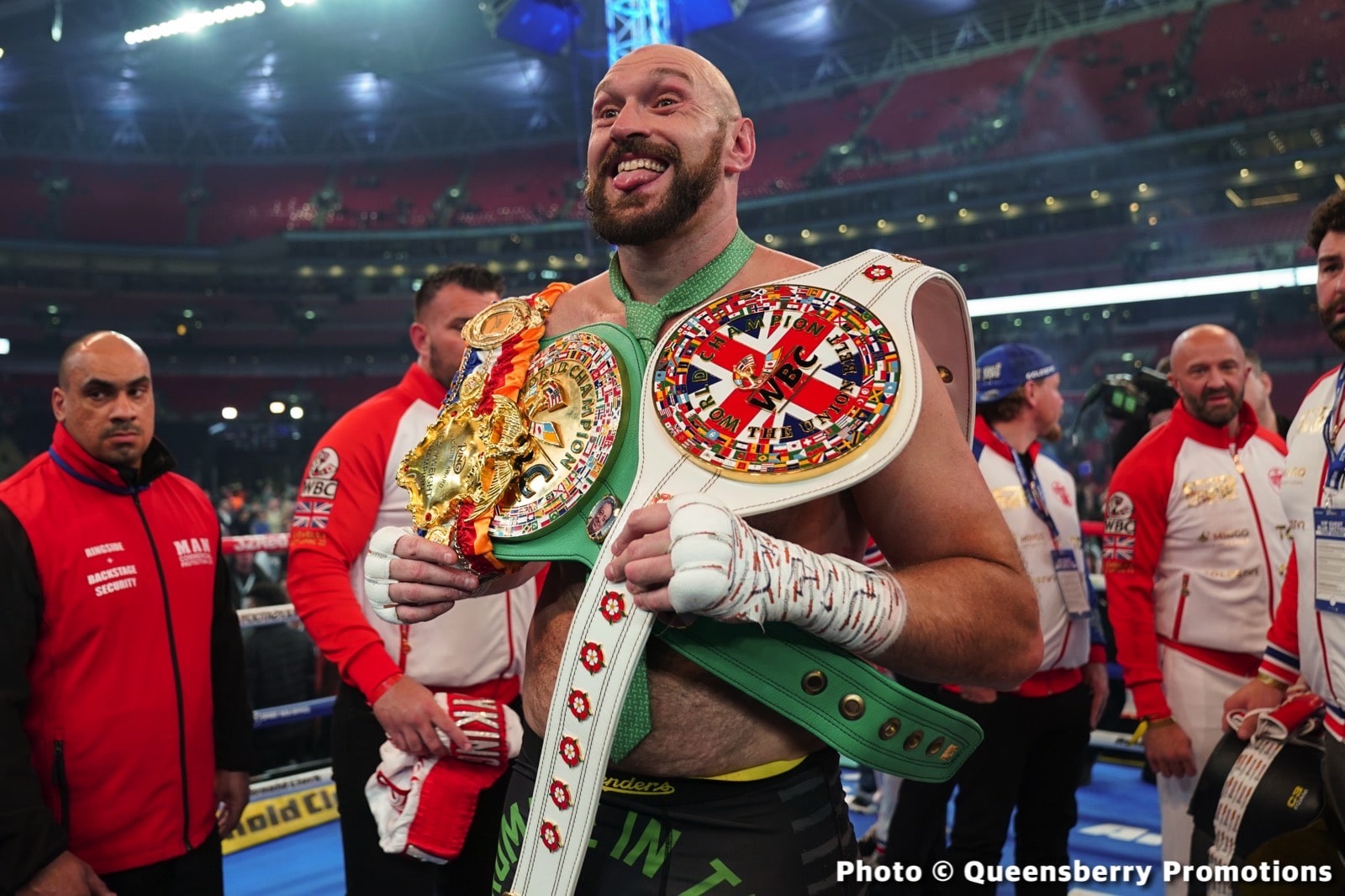 It’s smart for Fury to retire now because he would surely lose to Usyk or Joshua with the way he looked tonight.

Those guys have elements to their game that would neutralize Fury’s slow jab, telegraphed right hands, and his bad habit of clinching a lot.

Whyte looked old, slow, flabby, and nowhere near the fighter that knocked out 40-year-old Alexander Povetkin last March 2021. It’s not that Fury was impressive because he wasn’t, but it was more of a case of Whyte being so utterly inadequate.

Fury won the fight based on his size rather than his skills. We’d seen the 6’7″ Mariusz Wach give Dillian pure hell in 2019, landing many heavy blows. Whyte was more beat up by Wach than Fury. There’s no comparison, and Wach was an aging fringe contender back then.

Fury said, “I’m DONE,” and then launched into his plans of doing exhibitions, beginning with UFC heavyweight Francis Ngannou. It’s safer for Fury to fight Ngannou, who has no boxing experience and will be easy prey than it would for him to take on the Joshua-Usyk 2 winner and possibly lose.

To show how serious Fury, 33, was about wanting to fight Ngannou next, he invited him into ESPN’s post-fight interview. It looked cheap that Fury would use that moment to start peddling a mismatch against Ngannou to his fans.

Fury made it clear that he will be fighting the 35-year-old Ngannou, who would have zero chance of winning. Ngannou would be food for Dillian any top 15 heavyweights.

“I’ve been in this game 20 years; I’m 34 in a few months. This is definitely the end of the Gypsy King, and I went out with a bang. Tonight was amazing, but this is the end,” said Fury.

“Dillian Whyte is a warrior, and I believe Dillian will be a world champion, but tonight he met a great in the sport. I’m one of the greatest heavyweights of all times, and unfortunately for Dillian Whyte, he had to face me here tonight.”

After stopping him in the sixth, Fury was going overboard in smothering the 34-year-old Whyte with compliments. Let’s be clear. Whyte will NOT be a world champion.

As it is, it’s going to take years of winning for Whyte to get in position for another world title shot, and it’s not realistic for him to beat the top guys for him to get a second opportunity to fight for a belt.

You can argue that Whyte got this title shot against Fury because he chose not to fight Luis Ortiz in a WBC-ordered title eliminator. Had Whyte fought Ortiz, he’d likely have been knocked out. Instead.

“You still have got the other big boys, Deontay Wilder, Anthony Joshua, and Oleksandr Usyk; let them punch each other to pieces, but they’re not going to punch me to pieces because I’m done,” said Fury.

It looks weak on Fury’s part that he’s choosing to retire without fighting Usyk or Joshua because either of those guys would be better than anyone he’s ever fought before.

If Fury cares about his resume, he’ll stay around to fight the Joshua-Usyk winner. Some boxing fans believe Fury will wait to see if Joshua wins that fight.

If he does, Fury will fight him because that’s a match that would make him a lot of money. Even if Fury loses to Joshua, which he likely will, he’ll make a ton of money.

Usyk is a bad style match-up for Fury, and he’d take advantage of how slow & flabby the 6’9″ Gypsy King has gotten in the last two years.