Kevin Durant is one of the most unstoppable bucket-getters to ever play the game of basketball, but through three games of the Nets’ playoff series with the Celtics, Boston has completely mortalized the all-world scorer.

The Celtics have the Nets on the brink of elimination, one game away from pulling off a first-round sweep and their defense on Durant has been the difference in the series.

Typically a model of efficient and effortless scoring, the All-Star forward has looked frustrated and exhausted by the Celtics’ defense. The Ringer’s Shea Serrano put it best when Durant was struggling once again in Game 3.

In Game 2, Durant had zero (!) field goals made in the second half – it was the most field goal attempts (10) without a make in any half of his entire career. In Game 3, with the fate of the Nets’ season essentially on the line, Durant didn’t attempt one single field goal in the final 11 minutes of the game.

MORE: Will Ben Simmons play for the Nets in this series?

What are the Celtics doing to make the four-time scoring champion look so pedestrian?

It all starts with All-Star forward Jayson Tatum, who has emerged as one of the elite two-way players in the NBA today. 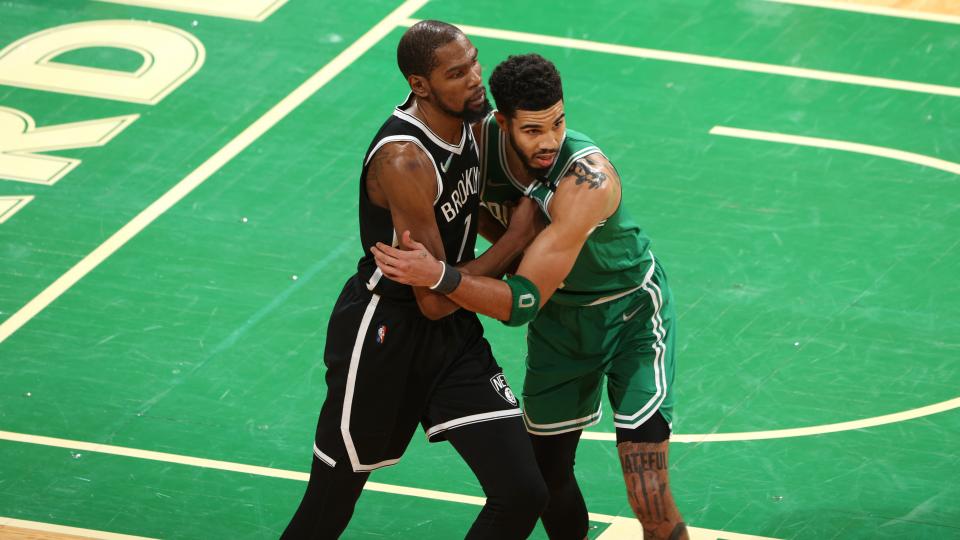 Tatum’s workload and effort cannot be overstated in this series. Offensively, Tatum’s 29.7 points per game rank fourth among all players in the postseason, while his 8.0 assists rank fifth. On top of shouldering one of the highest usage rates (30.9%) of the entire playoffs, Tatum has taken on the near-impossible assignment of containing Durant and so far, he’s had him in cuffs.

Take another second to digest that table.

In 121 partial possessions, Tatum has held Durant to the same number of points as turnovers. He also held him to no field goals in Games 2 and 3. Even more astonishing, Dur shooting 13.3 (!!!) percent from the field when being guarded by Tatum.

Boston’s defense, as a whole, deserves credit too though.

Tatum is Durant’s primary defender but with the Celtics’ switch-heavy defensive scheme, every player on the floor has to be ready to check him at any given time. Because of that, Durant is getting bumped and tagged everywhere he goes on the floor and the Celtics are making sure the superstar forward feels their physicality on every single possession.

“They’re playing me with two, three guys sometimes when I’m off the ball, mucking up actions when I run off stuff,” Durant said after a loss in Game 2. “I see (Al) Horford leaving this man and come over to hit me sometimes. They’re just playing two or three guys, hitting me wherever I go.”

This clip from Game 1 is exactly what he was talking about.

Tatum starts the possession on Durant but quickly switches with Grant Williams on a screen. Williams immediately tangles himself up with Durant and Horford comes down to get a second body on him. Williams works relentlessly to prevent Durant from getting an entry pass but even when he receives the ball, Williams gets his active hands on his shot attempt. Before then, Horford was ready to help, as was Jaylen Brown, as was Marcus Smart.

That attentiveness from the Celtics’ defense has to be taxing for Durant because he’s seeing at least two bodies every time he attacks inside the 3-point line. But even when he’s gotten Tatum on an island with nothing but space to work with, he still hasn’t been able to buy a bucket.

Boston’s defense has executed its game plan for KD to perfection and there’s no better example of that than Bruce Brown taking more shots (19) than Durant (11) in Game 3 when the Nets were trying to avoid going down 3-0 in the series.

The Celtics are disrupting Durant’s rhythm and flow, never letting him get comfortable on the offensive end.

It feels like Durant is due for an explosion, but he’s running out of games to get going. Boston will look to keep him in check for one more game to pull off a sweep when they take on the Nets on Monday, April 25 at 7 p.m. ET.