Deebo Samuel was named first-team All Pro in 2021 after finishing the season with 1,770 yards from scrimmage and 14 touchdowns; Samuel told ESPN last week that he had requested a trade away from the San Francisco 49ers

The star receiver told ESPN last week that he had requested a trade from the 49ers but didn’t specify his reasons for wanting out.

Lynch, speaking at a pre-draft news conference, said the team will always listen to offers but stressed his commitment to keeping Samuel on the 49ers roster.

“I just can’t ever imagine moving on from him,” Lynch said. “He’s been such a great player for us. He means so much to this franchise. Got nothing but love for the guy.” 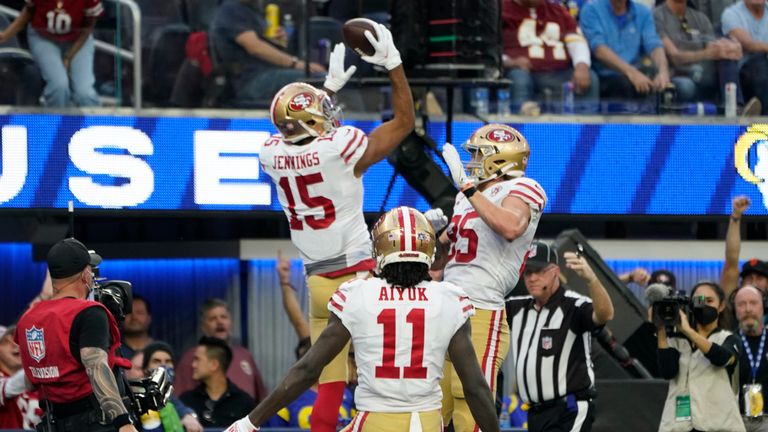 Samuel is entering the final year of the rookie deal he signed after being drafted in the second round in 2019 and is looking to take advantage of the exploding market of receiver contracts.

Samuel finished last season with 1,770 yards from scrimmage and 14 touchdowns, yet is set to earn $4m in 2022. Meanwhile, eight receivers have got new contracts this offseason worth at least $18m a year, including Tyreek Hill and Davante Adams after trades from their old teams.

The Green Bay Packers got a first and second-round pick from the Las Vegas Raiders for Adams, while the Kansas City Chiefs got a first, a second and three lower-round picks from the Miami Dolphins for Hill.

The Niners don’t have a first-round pick in this year’s draft – live on Sky Sports NFL, Friday, 1am – after trading theirs away last season to move up for quarterback Trey Lance, but they remain steadfast in not wanting to deal their top playmaker.

“I think he’s the perfect illustration – Herm Edwards used to talk about – when will meets skill you’ve got the opportunity to be special,” Lynch added. “I think Deebo probably embodies that as much as anyone.

“He’s got tremendous will, he’s a very talented player. I think by virtue of the way he plays, it’s inspiring. You just don’t let guys like that walk. I cant envision a scenario where we would.”

Elsewhere, the 49ers have announced that they’ve exercised the fifth-year option on defensive end Nick Bosa’s rookie contract. Bosa will earn a guaranteed $17.8m in 2023.

He missed all but two games of the 2020 season with an ACL injury but made the Pro Bowl in his rookie season and 2021.

“We’re going to do everything we can to keep him a part of this organization,” Lynch said. “He’s a foundational player, much like Deebo, a difference-maker.

“At the appropriate time we will endeavor to make that a reality, that he’s here for a long time.”

Lynch also said quarterback Jimmy Garoppolo will resume throwing in June, be that he is not expected to be at full strength until training camp begins in July as he continues his rehab from shoulder surgery.

Garoppolo is 31-14 as the starter in San Francisco, completing 67.7 percent of his passes for 11,162 yards and 66 touchdowns against 38 interceptions. He is 4-2 in six postseason starts.

The 49ers selected Lance with the No 3 overall pick in the 2021 Draft and he is expected to be the team’s starter in 2022, though Lynch reiterated that the team would not be releasing Garoppolo.

“You don’t just give players like that away,” he said.

Charlo on Terence Crawford: “He’s got to get past Spence and that ain’t going to happen”

How many times have Liverpool and Chelsea previously met in major cup finals?

Charlo on Terence Crawford: “He’s got to get past Spence and that ain’t going to happen”

How many times have Liverpool and Chelsea previously met in major cup finals?