Deontay Wilder to fight in 2022, could recapture WBC title 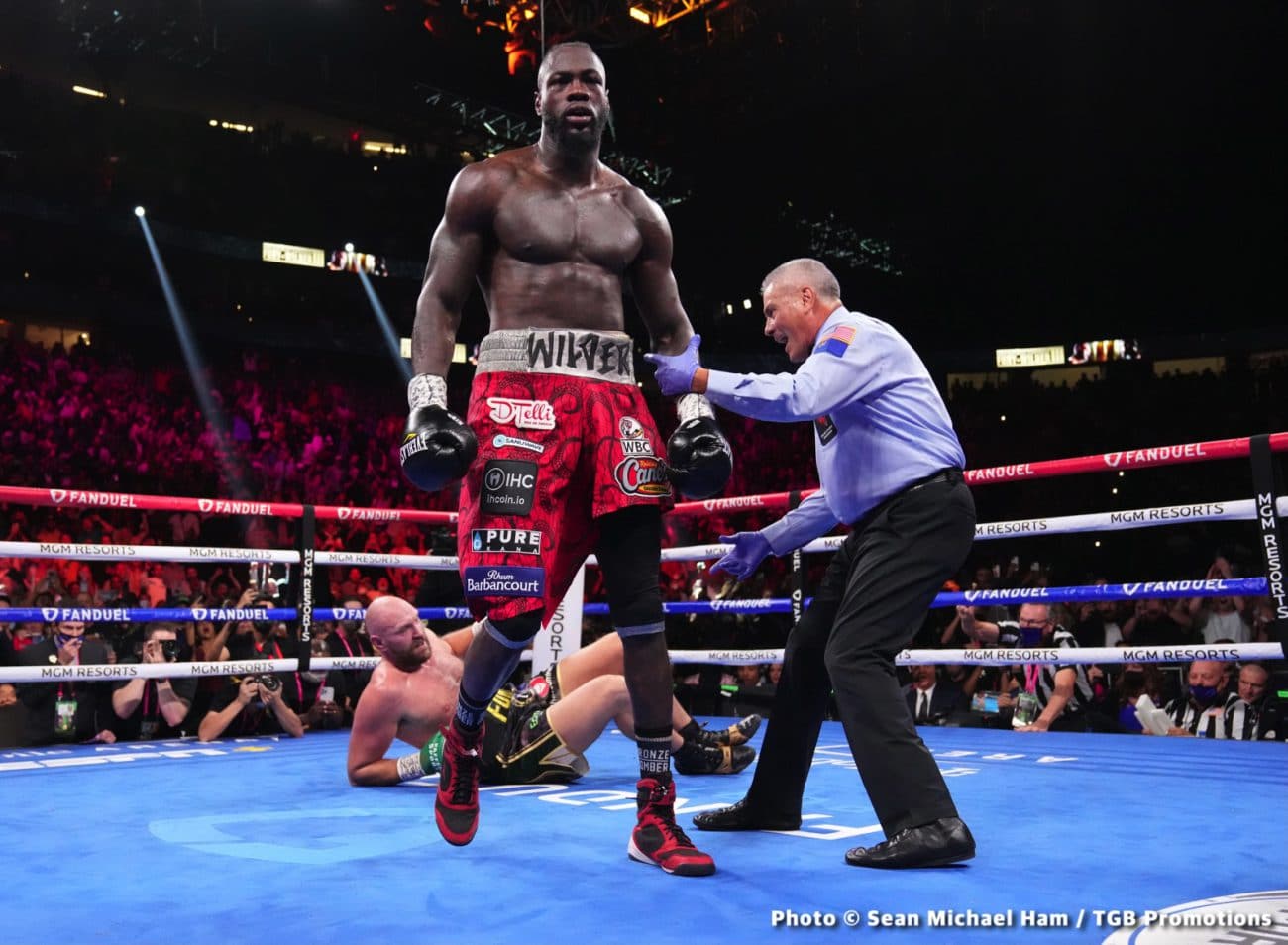 By Scott Gilfoid: WBC president Mauricio Sulaiman says Deontay ‘Bronze Bomber’ Wilder will return to the ring in 2022. Sulaiman isn’t saying how he knows that Wilder will be back, but he seems confident that he will be returning.

With Tyson Fury set to retire & relinquish his WBC heavyweight title, Wilder (42-2-1, 41 KOs) is in position at #1 in the World Boxing Council’s rankings to battle for the belt.

Fury says he hopes Deontay will get a chance to fight for his WBC title after he vacates the strap. It’s still not entirely clear whether the 33-year-old Fury will retire. Though he says he’s hanging up his gloves, his promoter Bob Arum says he’s not.

If this is just a game for Fury to get boxing fans more eager to purchase his PPV fights, it might work with some of them.

Depending on how long Fury stays out of the ring, it could backfire on him, especially if Deontay emerges from his six-month layoff to begin knocking out top guys again.

“He’s weighing up his plans for the future. He had a very busy reign as a champion, two knockout losses to Fury, difficult. Still, he’s matured, and he’s doing very well,” WBC president Mauricio said Sulaiman said to Sky Sports.

“I’m sure he’ll be back. He’s one of those fighters that can knock somebody out with one punch, and he has had many exciting fights,” said Sulaiman.

It appears that Sulaiman is speculating about Wilder coming back. In a recent interview, the 6’7″ Deontay talked about going on a mental trip to decide whether to continue his boxing career.

Not surprisingly, the Alabama native Wilder seemed bitter about what he’d experienced during his professional career, and he seemed fed up with the sport.

Given what Deontay went through in his three fights with Fury, you can’t blame him if he did decide to retire. Heck, we saw it all in those three fights.

Rabbit punches galore, floppy gloves, a referee shockingly giving a count to an unconscious Fury, and some fans believe a long count in the third fight. Yeah, it’s hard to blame Wilder if he elects to retire rather than come back and grace the boxing world with his presence.

With a net worth of approximately $30 million, according to Celebrity Net Worth, Deontay isn’t hurting for dough. He doesn’t need to return to the ring for money.

If the 2008 Olympic bronze bomber Wilder does come back, it’ll be for the love of the sport rather than for green stuff.

Wilder is the most exciting fighter in the division bar none and is arguably much more fun to watch heavyweight than Fury, a fighter that has been transformed by his American coach into a mauler.

Deontay gave Tyson Fury significant problems in their three fights, knocking him cold in the 12th round in their first fight and having him down for seemingly eternity in their recent fight in October.

Some boxing fans believe Wilder should have been credited for knockouts in his first and third fights with Fury.

“He’s a great fighter and a great person. I’m sure he will fight this year,” said Sulaiman about the former WBC heavyweight champion Deontay.

Let’s hope Sulaiman knows what he’s talking about with his talk of Deontay coming back to the sport. He’s going to get the boxing world excited about his words of a Wilder return, and if that doesn’t happen, there will be a lot of upset fans.

“I’d like to see Deontay Wilder fight whoever for it again,” Fury told Behind The Gloves. “I believe he knocks everybody else out.”

So there it is, Fury endorsing Wilder as the fighter to take over his spot.

NEXT: Frank Warren reacts to Dillian Whyte asking for rematch with Tyson Fury

Benzema: Why I went for Panenka pen | Pep: We'll play to win in Madrid