The Suns will have to overcome adversity if they’re going to return to the NBA Finals.

On Thursday, April 21, ESPN’s Adrian Wojnarowski reported that star guard Devin Booker could miss two to three weeks with a Grade 1 right hamstring strain that he suffered in Game 2 of the Suns’ first-round series against the New Orleans Pelicans.

Everything was going as planned for the top-seeded team in the West, as Booker exploded for 31 first-half points in Game 2 to give the Suns a five-point lead at halftime. All signs pointed to Phoenix defending home court and taking a commanding 2-0 series lead until Booker left the game seven minutes into the second half.

Booker never returned to the floor and the Pelicans took advantage of his absence to steal one on the road against the defending Western Conference champions. With Booker expected to miss the remainder of the series, things start to get interesting.

The series is tied at 2-2 as the teams return to Phoenix for Game 5. Without Booker, are the Suns actually in trouble of being upset in the first round?

Take a look at a few factors that come into play as a repercussion of Booker’s hamstring injury.

MORE: Watch the NBA playoffs on Sling TV (U.S. only)

How have the Suns performed without Devin Booker?

Booker missed 14 games this season and the Suns went 8-6 in those contests. However, it is worth noting that Phoenix was 8-3 in games Booker missed going into the final week in the NBA season, where it lost three games without the All-Star guard when it had already locked up the No. 1 seed in the West.

The on/off stats show exactly what you would expect – that without Booker on the floor, the team’s offense takes a huge hit, while, even though he is growing as a defender, the team’s defense improves.

The Suns will miss Booker in a big way on both ends of the floor, no matter what picture the numbers paint. But where he will be missed in particular is down the stretch of close games, where Booker was one of the most clutch players in the league this season.

Booker’s 94 points in the clutch ranked just outside the top 10 in the league. He scored with efficiency when the stakes were elevated, shooting 56.9 percent from the field and 40.9 percent from 3. As a result, the Suns were the league’s best team in the clutch, going 33-9 in games decided by five or fewer points.

Can the league’s best team all season find a way to advance in the playoffs without its best offensive player? That answer all starts with… 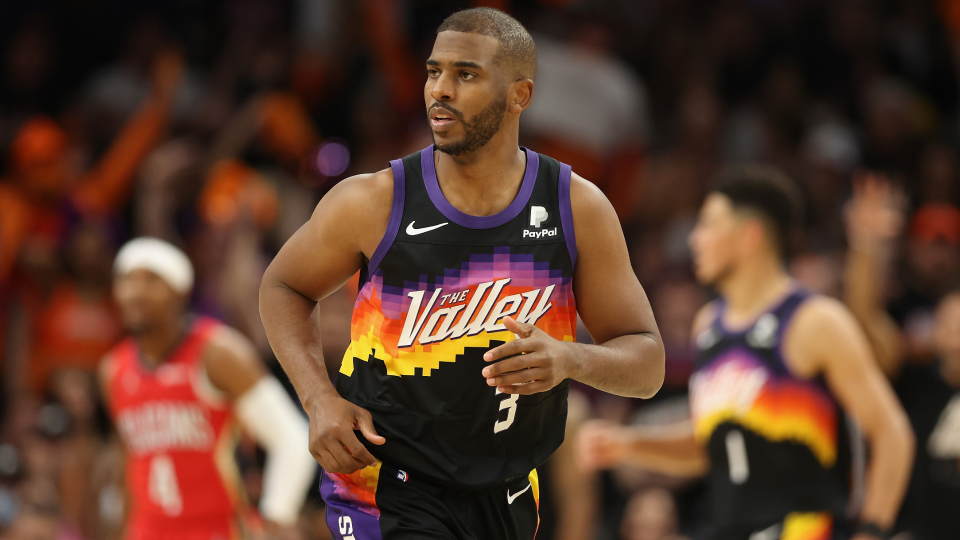 Speaking of clutch, All-Star guard Paul was exactly that when he carried the Suns to a Game 1 victory. The Pelicans cut Phoenix’s 19-point halftime lead to just eight by the end of the third quarter, but Paul sprung into action to make sure his team held on for a victory.

The veteran floor general scored 19 of his 30 points in the fourth quarter, doing what we’ve seen Paul do so many times throughout his career.

But can the Point God keep the Suns afloat without his young star running alongside him?

Paul couldn’t replicate that Game 1 performance in Game 2, shooting 5-for-16 from the field. He still went for 17 points and 14 assists, but his scoring wasn’t there when Phoenix needed it to be once Booker went down.

In Game 3, Paul bounced back to finish with 28 points and 14 assists in a win but he ran out of gas in Game 4, turning in one of the worst postseason performances of his career with four points on 2-for-8 shooting.

According to StatMuse, Paul had a usage rate of 21.1 percent in games that Booker did not play this season. That is only 1.4 percent more than his season-long usage rate (19.7), but it’s safe to assume that number will increase even more during the playoffs.

It’s easy to forget that Paul has played just over 10 games (!) since returning from a thumb fracture that caused him to miss the majority of the season after the All-Star break. He also does have a lengthy injury history in the playoffs, which is a cause for concern considering the workload he is shouldering in the first round.

At 36 years old, that wear-and-tear could have major implications as the Suns get deeper into the postseason, should they advance.

Who steps up in Devin Booker’s absence?

According to Arizona Sports’ John Gambadoro, the Suns will start Sixth Man of the Year candidate Cameron Johnson in Booker’s place.

This doesn’t come as much of a surprise, considering the Suns closed Game 2 with a lineup of Paul, Johnson, Mikal Bridges, Jae Crowder and Deandre Ayton, which will likely serve as their Game 3 starting five.

In 16 starts this season, Johnson averaged 16.3 points on 42.0 percent shooting from 3, which is an improvement over his season-long average of 12.5 points per game.

You can also expect reserve guards Cameron Payne and Landry Shamet to see an uptick in playing time, moving up on the depth chart in Booker’s absence.

Payne was as solid as can be when Paul was sidelined at the end of the season, averaging 14.1 points and 9.5 assists as an interim starter. Shamet had a few strong outings during that stretch as well, scoring double figures in seven of the 15 games without Paul.

Head coach Monty Williams will likely rely on a combination of those two guards to make up for what the team is missing in Booker.

The Suns, who finished a 32-9 record away from home in 2021-22 — the fifth-best road record in NBA history — regained home court advantage with a Game 3 win, but the Pelicans evened things up before the series shifted back out to Phoenix.

When Booker went down, Vegas oddsmakers made serious adjustments to the odds for this series.

As you can see, the Suns are still favored to win the series, just not as dramatically as they were before Booker’s injury.

The All-Star’s absence also altered Phoenix’s title odds, dropping from +260 at the end of the regular season to +550 after Booker’s injury, according to FanDuel Sportsbook.

That +550 number no longer makes the Suns title favorites, with the Golden State Warriors (+280) and Boston Celtics (+500) passing them.