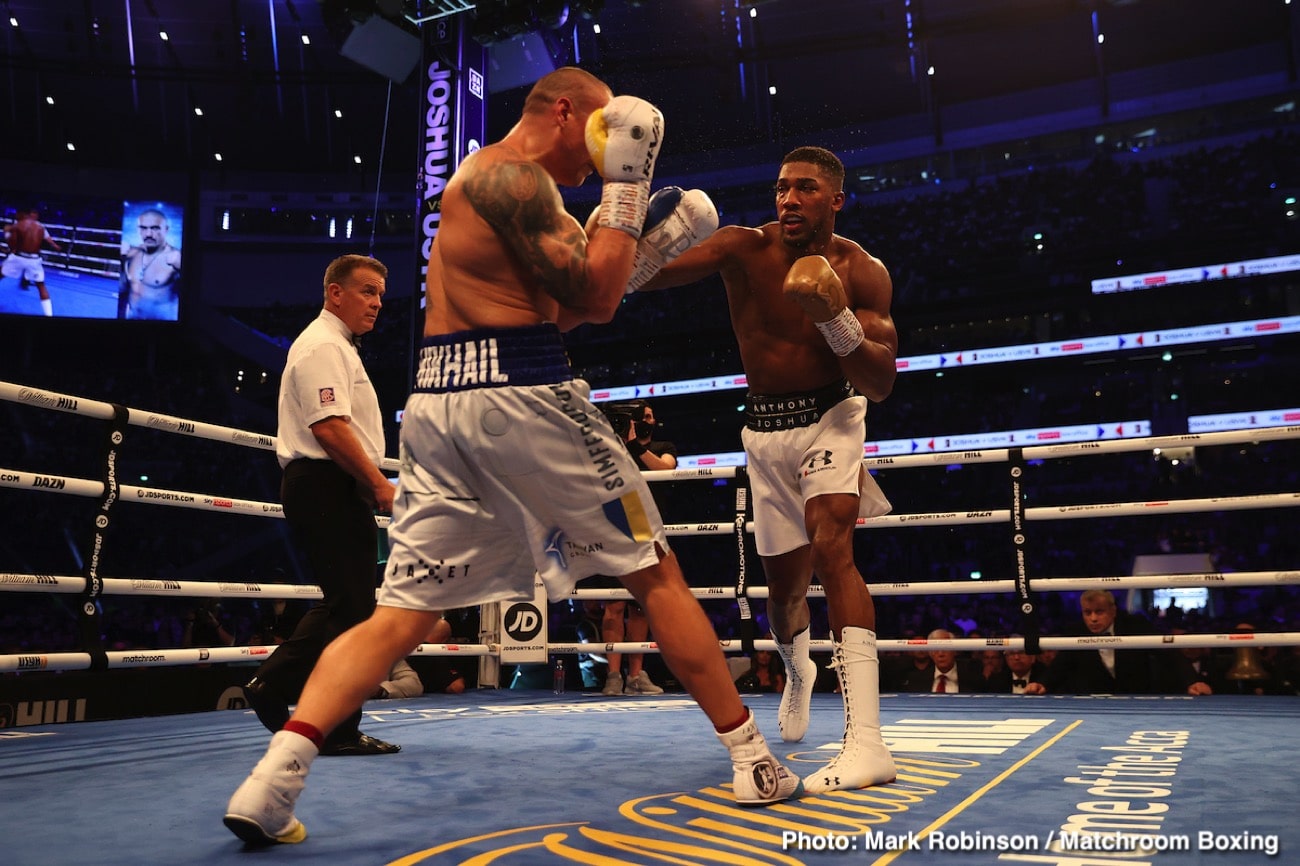 By Barry Holbrook: Matchroom promoter Eddie Hearn says the frontrunner date is July 23rd for the rematch between IBF/WBA/WBO heavyweight champion Oleksandr Usyk Anthony Joshua, and the location will be in either Saudi Arabia or the UK.

The question is whether Usyk will be able to gain back the 20+ pounds of muscle weight that he lost in the war in Ukraine in time to defend his unified heavyweight title against Joshua in July.

To be sure, it’s going to be difficult for Usyk to gain back all the weight that he lost during the war in just two months. For anyone who has served in combat duty or gone out in the field for training in the military, you lose muscle weight rapidly.

Gaining it back after returning takes many months. Depending on how long you’ve been in the field or combat duty, you don’t gain it all back in two months.

If Usyk is only capable of gaining back half the weight that he lost and is forced to fight at around 210 lbs, Joshua is going to have a tremendous size advantage by coming into the fight in the mid-240s or 250s.

It’s no great surprise that July 23 is still the frontrunner, as Hearn has been talking about that being the most likely date for the Joshua vs. Usyk 2 rematch for over a month now.

“We’re going to be in July,” Matchroom Boxing promoter Eddie Hearn said to the DAZN Boxing Show on when Joshua and Usyk will fight their rematch.

“July 23 is obviously a date that has been bandied around. Probably the front runner right now, that date. We’re in final negotiations with a number of sites in the Middle East and the UK. America, I don’t think this is going to take place.

“I’d like to be in a position, fight week for Canelo [Alvarez], we can give you some news,” said Hearn.

If the choice were up to Hearn, he’s been quite vocal about wanting the rematch between AJ and Usyk (19-0, 13 KOs) in London, but the fight will be where it can make the most amount of money.

After last Saturday’s fight between WBC heavyweight champion Tyson Fury and mandatory Dillian Whyte pulled in a crowd of 94,000+ fans, it doesn’t make sense for the Joshua-Usyk II rematch not to take place in the UK.

What makes Saudi Arabia a great deal for Joshua & Usyk is the site fee money. It’s likely that they’ll be able to make more money fighting in the Middle East than they can in the UK, and if that’s the case, there’s where the fight will take place.

With Fury choosing to retire rather than fight the Joshua-Usyk 2 winner, there’s less to look forward to after the rematch than there was before.

If Fury chooses not to fight again, the Joshua vs. Usyk II winner will probably face the Joseph Parker vs. Joe Joyce winner or possibly Filip Hrgovic.

Hopefully, Fury changes his mind about retiring and stays around to fight Joshua or Usyk. Joshua vs. Fury would be a tremendous fight.

NEXT: Valdez vs. Stevenson will have Ring Magazine 130-lb title on the line