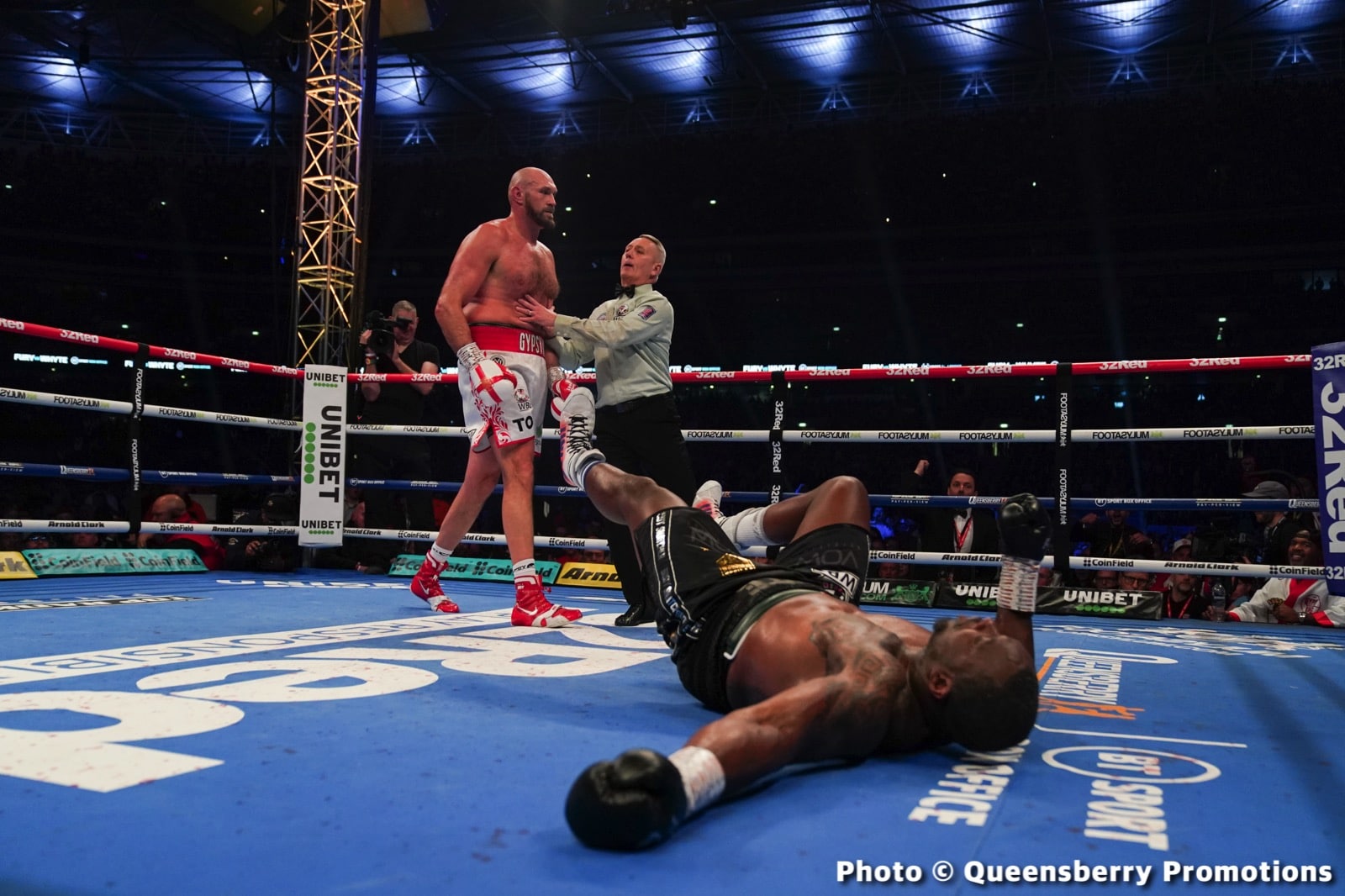 By Charles Brun: Ricky Hatton says Tyson Fury won’t retire until he fights Oleksandr Usyk and Anthony Joshua because those are two boxes that he needs to check before he walks away.

As far as Hatton is concerned, he doesn’t believe anything that WBC heavyweight champion Fury (32-0-1, 23 KOs). Hatton has noticed how Fury fluctuates and has already disappeared once and returned.

Fury is making more out of his win over Dillian Whyte than the average fan after his sixth-round knockout at Wembley Stadium in London.

The way Fury has been bragging about his accomplishment, you would think he’d just beaten the #1 guy in the division instead of a guy knocked out in five rounds by 40-year-old Alexander Povetkin in 2020.

Fury might actually go ahead with his promise of retiring because he’s made a lot of money, and he sounds like he’s worried about losing.

In the last four years, he has selected his opponents well, fighting guys he knew he could beat in Deontay Wilder, Otto Wallin, Whyte, Sefer Seferi, Francisco Pianeta, and Tom Schwarz.

Is Fury afraid of losing? I’d say that’s a big yes. You can argue that Fury is so fearful of losing that he’s willing to bypass the opportunity to make $60 million.

“I love Tyson, but it’s very, very hard to believe a single word that comes out of his mouth, and I say that with love,” Hatton said to the BBC.

“You have to keep setting yourself goals. There’s Anthony Joshua and Oleksandr Usyk. Tyson has proved he’s number one, but everyone is saying, ‘who would win out of the three of them?’.

“I don’t think Tyson will want to retire until he ticks both them boxes and finds out.

“Tyson, get it done now. I’d rather him not be sat on his settee in three years, saying, ‘I want to fight them now,” said Hatton.

“I’ll still be training every day; I’m going to stay in shape, just enjoy my life and be a normal person,” said Fury to Top Rank Boxing when asked what he’ll do with his life now that he’s retiring.

“I’m not some big-time celebrity. I’m not interested. What I will tell you will see me in, and that’s entertainment. You’re going to see me in exhibition fights.

“I’ll keep entertaining you, but not inside the paid squared circle as a professional boxer, but there will be many more entertaining nights back here in the UK.

“A big shoutout to ESPN and Top Rank over there [in the U.S] as well. They made it happen. I went over to America, fought the best over there, earned my reputation as a folk hero, and returned home after a long voyage away and got a superstar welcome.

“Without the American journey, cracking America, it would have never happened,” said Fury.

NEXT: ‘I am going to be the superstar’ – Shakur Stevenson says about fight against Oscar Valdez