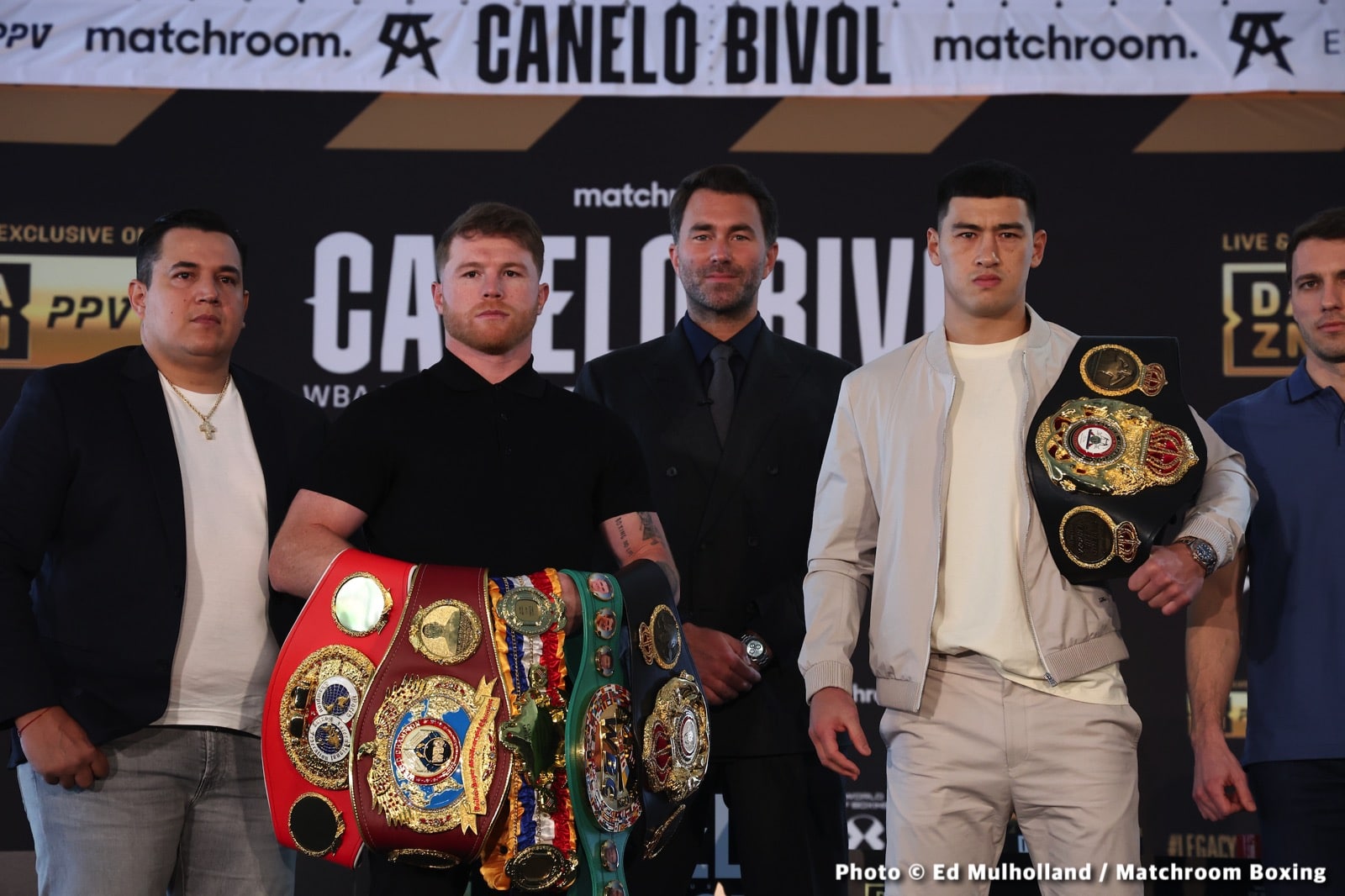 By Huck Allen: Canelo Alvarez is ten days away from what many fans believe will be the most brutal fight of his career against WBA light heavyweight champion Dmitry Bivol on May 7th.

The casuals & hardcore boxing fans that know little about the undefeated Bivol (19-0, 11 KOs) view this fight as a walk in the park for Canelo, comparing the Russian fighter to Caleb Plant & Billy Joe Saunders.

Indeed, Bivol is a much different boxer than Plant, Saunders, or anyone that Canelo has fought before, and he could be a bridge too far for the Mexican superstar.

Canelo (57-1-2, 39 KOs) picked the 31-year-old Bivol because he wants his WBA title as the first piece of the four-belt puzzle to become a two-division undisputed champion.

To accomplish Canelo’s goal of becoming the undisputed champion at 175, he needs to defeat Bivol on May 7th and then beat the winner of the June 18th unification clash between IBF/WBC champion Artur Beterbiev and WBO belt holder Joe Smith Jr.

“They’re seeing big numbers on the platform, particularly through the Ryan Garcia [vs. Emmanuel Tagoe] fight, and Canelo is the biggest star in boxing. I think it’s [Canelo-Bivol] is going to do really well,” Hearn said about the massive fight between Canelo and WBA light heavyweight champion Bivol on DAZN PPV.

“Dmitry Bivol is 100% in his prime, I don’t think you’ve ever seen the best of him, and they truly believe they’re going to win. Canelo looks like an absolute f**** beast, and he’s ready to put on a show in Las Vegas next week,” said Hearn.

“I think it’s a really interesting project for them [DAZN], pay-per-view in the U.S market, and I think they’ll do really well. It’s a great fight, and I believe everyone rates the [Canelo vs. Bivol] fight. I think it may just be a contest that surprises many people.

“It’s not there. He MUST win to fight Gennadiy Golovkin, and it’s going to be a really tough fight,” said Hearn when asked what happens with the Alvarez vs. Gennadiy Golovkin trilogy fight for September if Canelo loses his May 7th battle against WBA 175-lb champion Bivol on DAZN PPV.

Hearn didn’t say whether a trilogy match between Canelo and Golovkin can still happen at a later date if the Mexican star loses to Bivol. Fans will still want to see the Canelo-Golovkin trilogy.