Celtics vs. Bucks: Predictions, expert picks, schedule for 2nd Round in 2022 NBA Playoffs

The stage is set for an epic Eastern Conference Semifinals matchup between the No. 2 seed Boston Celtics and No. 3 seed Milwaukee Bucks.

The Celtics and Bucks are on a collision course after steamrolling their respective first-round opponents.

The Celtics were the only team to pull off a sweep in the first round, defeating the Brooklyn Nets in a shocking four-game fashion. Toward the back end of the season, once it became clear that the Nets would be a Play-In Tournament team and a potential first-round matchup for one of the top two seeds, teams began to position themselves away from that possible matchup.

Boston elected to dive straight into that fire and came out unscathed, handling Brooklyn with ease. Superstar forward Jayson Tatum had a statement series, making his case as one of the best two-way players in the NBA today. The 24-year-old averaged 29.5 points, 7.3 assists, 4.5 rebounds and 1.8 steals per game while shutting down four-time scoring champion Kevin Durant on the defensive end.

Even though he doesn’t draw the assignment of defending Giannis Antetokounmpo, Tatum will be put to the test again in trying to out-perform another superstar and quite possibly the best player in the world.

Antetokounmpo led the Bucks to a gentleman’s sweep over the Chicago Bulls, advancing out of the first round in five games. The two-time MVP put Milwaukee on his back, averaging 28.6 points and 13.4 rebounds blocks per game.

Antetokounmpo had to step up even more than usual after his All-Star teammate Khris Middleton went down with a left MCL sprain in Game 2. Middleton was ruled out for the remainder of the first-round series and his status for the Conference Semifinals is still up in the air.

Will the Celtics keep rolling? Or will the defending champions continue their pursuit of going back-to-back? 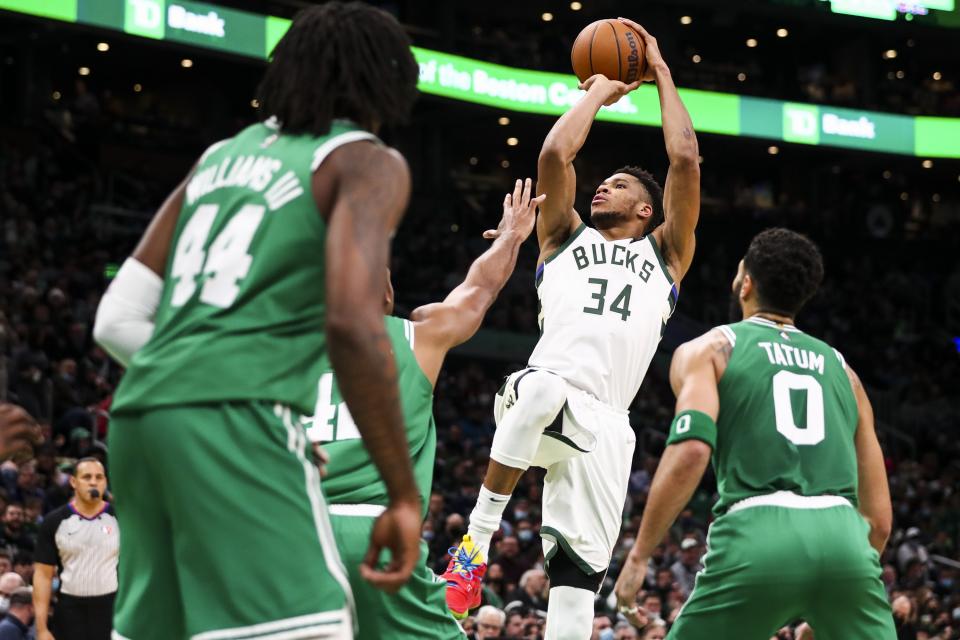 Antetokounmpo versus the Celtics’ defense reminds me of the saying, “when an unstoppable force meets an immovable object.”

Antetokounmpo is the best player in the world right now – it’s that simple. He claimed that crown after leading the Bucks to a title last season while taking home Finals MVP and he has yet to surrender it, but he’ll be put to the test in this series.

The Celtics own the best defense in the NBA in terms of defensive rating, opponent field goal percentage and opponent 3-point percentage. Boston’s switch-heavy defensive scheme just made Durant, one of the greatest scorers of all time, look completely mortal and now it will try to do the same to Antetokounmpo.

The Celtics have had success defending Antetokounmpo in the past – using a combination of Al Horford, Grant Williams and a floating Robert Williams III to make life difficult – but the Greek Freak did terrorize Boston twice this season.

The Celtics got the best of the Bucks in their first two meetings, but Antetokounmpo missed the first of those two games. Milwaukee won the next two games, but the Celtics were without Tatum, Horford and Robert Williams III for one of those contests. Regardless, Antetokounmpo went for 36 and 29 points, respectively, while also tallying double-digit boards and five assists in each game.

There is no love lost between the Celtics and Bucks, who have met in the postseason twice in their past four playoff runs. Boston defeated Milwaukee in seven games back in 2018, where the home team won every game of the series. In 2019, the Bucks got revenge, making easy work of the Celtics in just five games.

This series will come down to which side caves first: the unstoppable force or the immovable object.

Celtics vs. Bucks will open at the TD Garden in Boston for Games 1 and 2. The dates are still to be determined for this series.

Check back once the Eastern Conference Semifinals schedule is released.