Wakefield led 12-4 at half-time thanks to a spectacular Lewis Murphy try and two conversions and score from Mason Lino; Chris McQueen and Luke Yates struck back for the Giants before Ricky Leutele grabbed the game-clinching score 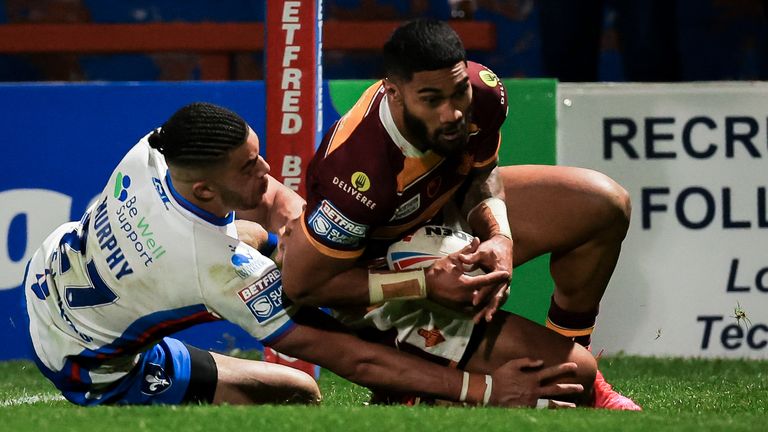 Highlights of Wakefield Trinity against Huddersfield Giants in the Betfred Super League.

Highlights of Wakefield Trinity against Huddersfield Giants in the Betfred Super League.

Ricky Leutele’s try 15 minutes from time saw Huddersfield Giants register their first victory away to Wakefield Trinity since 2015 with a 14-12 win in Thursday’s Betfred Super League match at Be Well Support Stadium.

Lewis Murphy’s spectacular finish and a try and two conversions from Mason Lino had Trinity 12-4 up at the break, with Chris McQueen’s unconverted score getting Huddersfield on the board.

But Luke Yates struck back for the visitors six minutes after the restart following a long spell of pressure and Leutele grabbed the game-clinching score to set the Giants up nicely for next week’s Betfred Challenge Cup semi-final against Hull Kingston Rovers.

Story of the game

Huddersfield, without a win in their previous three games, shrugged off the absence of four players through suspension and a bout of flu in the camp which forced the late withdrawal of England winger Jermaine McGillvary to clinch a victory which enables them to climb back up to fourth place in the table.

French international Theo Fages was at the heart of the Giants’ display on his return from injury, helping lay on all three of their tries, while hooker Danny Levi caused all sorts of problems for the home side with his darting runs from dummy-half.

Hosts Wakefield created the first chance six minutes in when left winger Tom Johnstone gathered full-back Max Jowitt’s cut-out pass and acrobatically dived over at the corner, only for the video referee’s replays to indicate a foot in touch.

Trinity had more joy on 15 minutes when a 40-20 kick from captain Jacob Miller created the position for his half-back partner Lino to jink over for the game’s first try, which he converted. 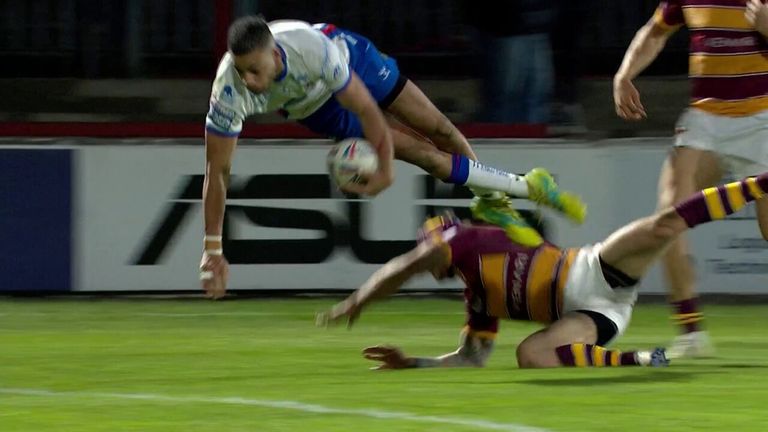 Lewis Murphy takes flight to score for Wakefield Trinity on the stroke of half-time against Huddersfield Giants.

Lewis Murphy takes flight to score for Wakefield Trinity on the stroke of half-time against Huddersfield Giants.

Harry Bowes came into the starting line-up for Wakefield Trinity at hooker, while David Fifita made his comeback on the interchange bench after six games out due to injury.

Huddersfield Giants were able to welcome French scrum-half Theo Fages back into the team after a spell out injured, with Matty English brought back into the front row after an absence too.

Huddersfield came more into the game after that, with half-back Fages pulling the strings to great effect on his return from injury. His short pass got second row McQueen charging over for his eighth try of the season on 24 minutes which cut the deficit to two points.

The Giants were pressing for another try when Trinity broke away in the final play of the half to extend their lead. Lino ran the ball on the last tackle as the hooter sounded and centre Reece Lyne’s speculative kick inside bounced kindly for second rower Jai Whitbread, whose long pass enabled winger Murphy to cut inside past a wrong-footed and fragmented defence for a spectacular score.

Lino’s goal made it 12-4 but the Giants were rejuvenated at the start of the second half and were soon camped on the Wakefield line. Skipper Yates, Levi and McQueen were all held up over the line and Fages’ intelligent kicking forced two goal-line drop-outs before the pressure told when Yates charged over from Fages’ short pass for his side’s second try.

Olly Russell added the goal to once more cut the gap to two points and the visitors hit the front for the first time on 64 minutes when centre Leutele won the race to France international Fages’ precision kick to the line. 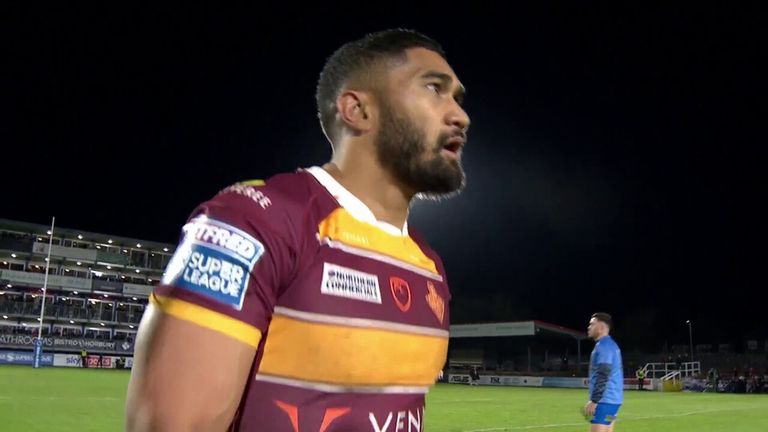 Wakefield had won their previous six home meetings with Huddersfield but they have now lost their last five matches in all competitions and remain third from bottom of the table. 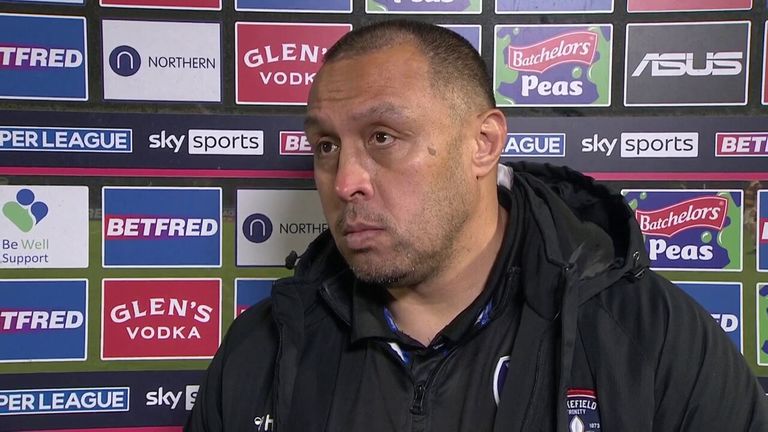 “We were simply not good enough tonight in our execution. Early in the second half, we just crumbled under the pressure, and we’ve got to be better than that. The way we get out of it is working hard and getting back to the graft.

“We’re trying to find the combinations that work and get back to the stuff that worked for us earlier in the season. We’ve got to do that smartly, we’ve got a bit of a break now and a period where we can put some really good work in to try to get back to some of that form we had only a month ago.” 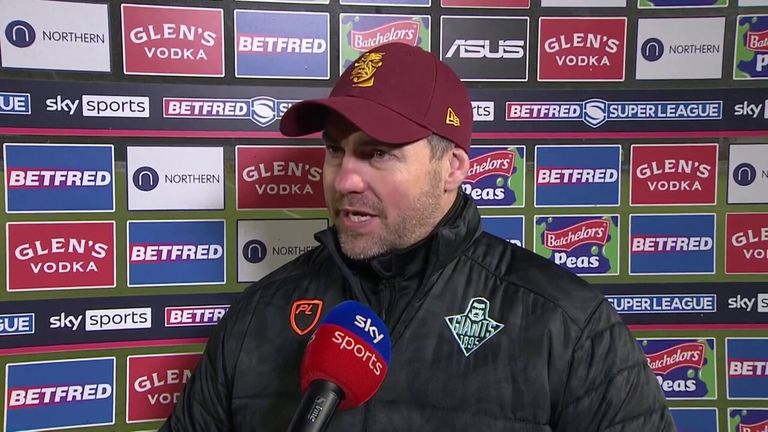 “It was outstanding, the things we’ve had to deal with this week and a bit of adversity. We asked for a hunger off the boys – we didn’t have any hunger last week and energy around us, especially in our defence. I thought today we were outstanding – this is a big win for us.

“We don’t want to be a team which starts well and drops off, we want to stay in that top pack. If we’d lost today we could have fell away from that, so we’ve done our job going forward and looking forward into a [Challenge Cup] semi-final.”

Huddersfield now turn their attention to the Betfred Challenge Cup semi-finals, where they face Hull Kingston Rovers in the double-header at Elland Road on Saturday, May 7.

Wakefield are not in action again until Sunday, May 15 when they travel to France to take on Super League’s bottom side Toulouse Olympique.