Taylor: I don’t train to lose | Serrano: I’m ready to be undisputed

Katie Taylor and Amanda Serrano share the Madison Square Garden stage with mutual goals on Saturday as the pair fight for undisputed glory while seeking to inspire young female athletes.

The undefeated Taylor (20-0) puts her WBA, WBC, IBF and WBO lightweight titles on the line against seven-weight world champion Serrano, two years after their initially-planned meeting was cancelled amid the coronavirus pandemic.

Taylor admitted the event carried a “very different” feeling to the times as a 10-year-old when she had to pretend to be a boy in order to fight, back before women’s boxing was sanctioned in Ireland.

The 35-year-old is confident she will leave New York as she arrived, with all four belts in hand.

“I don’t train to lose any fights, I train to win, it’s the same for me Saturday,” Taylor told reporters. “I’m stepping in there confident I’ll be coming out victorious. 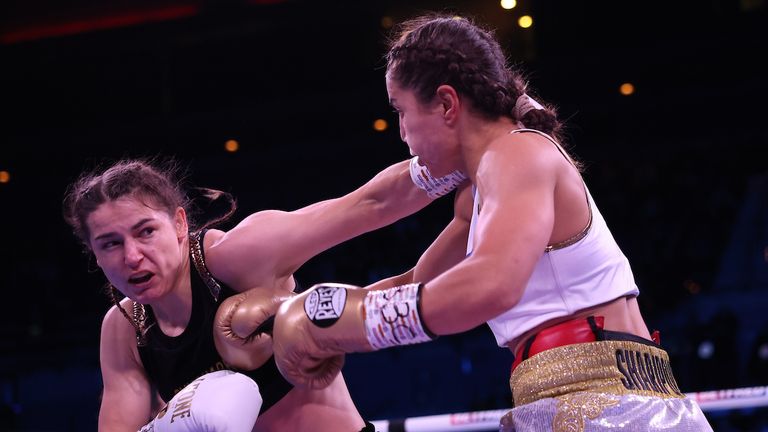 “Stylistically I think it’s going to be a very exciting fight. I think the winner is going to have to show a lot of heart, a lot of grit, a lot of skill.

“It’s going to be a combination of those things, I think you’re going to see great boxing.”

The 33-year-old, whose only career defeat thus far came to Frida Wallberg in 2012, said Saturday would be for women across sport. World super-featherweight champion Mikaela Mayer says she would be happy to step up in weight and take on Katie Taylor in the ring.


“I shine under pressure, I’m just excited to go out there,” said the Puerto Rican fighter.

“I know Katie Taylor is a true champion, she’s undefeated for a reason but one of my goals is to become undisputed champion and she has that and I’m going up two divisions once again to face the best, one of the best fighters in the world, I’m ready and I can’t wait until Saturday night to prove we deserve this opportunity of the spotlight and everything together.

“It’s been an amazing long journey to get here to fight Katie Taylor. I think the timing couldn’t be better than right now, I can’t wait for Saturday night.

“I’m so looking forward to Sunday and being undisputed champion.”

“I think no matter what happens Saturday the real winners are the fans and women in general and the sport of women’s boxing.”