West Ham United continue their bid to reach a first major European final since 1976 when they play the first leg of their Europa League semi-final against Eintracht Frankfurt on Thursday evening.

The Premier League side reached the semi-finals with a stunning 3-0 second-leg win over Lyon in the last eight, giving them a 4-1 aggregate victory. Despite still having a mathematical, but slim, chance of finishing in the top four, David Moyes signalled his intention to prioritise the Europa League by making a number of changes in Sunday’s 1-0 domestic loss at Chelsea.

They will now hope that history can repeat itself as last time they were in the semi-finals of a European competition, the European Cup Winners’ Cup in 1976, it was Frankfurt who they faced and beat, progressing through 4-3 on aggregate.

Frankfurt, though, have had their own amazing run through to the last four. The ninth-placed Bundesliga side shocked Barcelona 4-3 on aggregate, triumphing 3-2 in the second leg.

The Sporting News will be providing updates throughout the evening, with live score updates and commentary below.

38 mins: Big scare for West Ham. It is that man Knauff who gets in behind the defence again, but he is unable to get a shot on target under pressure from Aaron Cresswell.

35 mins: The game has calmed down a little after a frenetic first 20 minutes. West Ham’s intensity has dropped a little since levelling, while Frankfurt are content to try and hit the home side on the break when they can, trying to get Kostic on the left flank into the game where possible.

30 mins: That was Antonio’s first goal in any competition since March 2 and he deserves it. He has been terrific so far and has really caused Frankfurt problems.

25 mins: It has been a terrific response from West Ham but they cannot afford to let their guard down. Daichi Kamada gets away on the left for the Bundesliga side and his cross spins across the goal with West Ham relieved to see that none of his teammates were in the vicinity to help it home.

It had been coming and West Ham are level. Zouma’s header across goal from a free-kick is hooked goalwards by Antonio and despite the best efforts of the Frankfurt keeper Kevin Trapp it was adjudged to have crossed the line.

Video only available to UK audience

Set pieces, they are ALWAYS dangerous at set pieces…#UEL pic.twitter.com/cBYCUuVrkP

18 mins: Antonio and Bowen are troubling Frankfurt with their speed and both men have got behind the German side’s defence already. Warning signs for the Bundesliga side though they show their danger on the break as Kostic races away after Bowen loses possession but his final ball to Borre is wayward.

14 mins: So close to an equaliser. Bowen goes through on goal from a pass from Pablo Fornals but his shot hits the outside of the post and bounces away.

12 mins: Better from West Ham. A spell of possession ends with a ball through to Antonio, but he was offside. But encouraging all the same. No need to panic yet.

8 mins: Perfect start for Frankfurt, who remember have not lost yet in any match in the Europa League this season. A real challenge ahead for West Ham, who are struggling to get a foothold in this game so far as the Germans dominate possession.

5 mins: Well, that is how you silence a noisy crowd of East Londoners. The West Ham players and fans look shellshocked.

Not even a minute played and we’re in front! The Eagles catch out the hosts as @RafaelBorre_ crosses the ball to the far post, where Knauff ghosts in to head it home.

Dream start for the Germans as Ansgar Knauff heads home with less than a minute on the clock! Awful defending from West Ham as Knauff is able to nip at the far post to nod home from Rafael Borre’s centre.

Video only available to UK audience

KICK OFF: We are under way at the London Stadium.

4 minutes to KO: Teams are out on the pitch at the London Stadium and an amazing atmosphere as I’m Forever Blowing Bubbles echoes around the arena.

10 minutes to KO: Amusing slip of the tongue from David Moyes. Speaking to BT Sport, he is asked what playing in an European semi-final means to him and the club. He replied: “We enjoyed winning the semi-final.” Then checked himself and added: “I mean the quarter-final. I wish that had been the semi-final. But that was a great achievement but we are now focused on tonight and delivering another big night for our supporters.”

The teams have finished their warm ups and are now back in the dressing rooms ready for the action to begin shortly.

15 minutes to KO: BT Sport’s coverage is up and running in the UK and they have been hearing from Eintracht Frankfurt’s Djibril Sow on what they are wary about with West Ham. “They like to get a lot of crosses in and they have some big players,” said the Swiss midfielder. “It has worked for them well and we have to be ready to deal with.”

25 minutes to KO: Frankfurt made headlines two weeks ago by not only winning in Barcelona but doing so with 30,000 of their fans having made the journey from Germany. There are not as many in London tonight, but the Bundesliga side are certainly not lacking in support as they try and reach their first major final since they won the UEFA Cup in 1980.

40 minutes to KO: The major boost for West Ham tonight is that Kurt Zouma has recovered sufficiently from an ankle injury to be part of the Premier League side’s defensive unit.

50 minutes to KO: Teams will be out warming up shortly with the atmosphere already building up nicely at the London Stadium. The last time West Ham were in this situation in 1976, in the European Cup Winners’ Cup, by coincidence it was Frankfurt they faced in the semi-finals. West Ham prevailed 4-3 on aggregate after losing the first leg in Germany 2-1. They’ll be hoping for a similar result to this tie, though a different outcome in the final. In 1976 they lost 4-2 to Anderlecht in the final.

80 minutes to KO: And now we have the Frankfurt line-up too. Two changes from the side that prevailed in Barcelona two weeks ago. Djibril Sow is in for Kristijan Jakic in midfield and Tuta replaces the suspended Obite Ndicka in defence.

75 minutes to KO: We have the West Ham team and six changes from Sunday’s loss to Chelsea with as expected Rice, Bowen, Antonio and Manuel Lanzini all coming back in.

Zouma starts in one of six changes. ⚒

85 minutes to KO: It was their 3-2 win in Barcelona, a game where the Bundesliga side were 3-0 up after 67 minutes, that really made European football fans stand up and take note of Eintracht Frankfurt. But their away form has been formidable in the Europa League this season, winning five of their six games on the road, with the other result being a draw at Fenerbahce. 22 of their 40 points in the Bundesliga have come away from home for them, so Oliver Glasner’s side should not be underestimated by West Ham fans.

100 minutes to KO: Not long now until we know the teams for tonight’s action. David Moyes showed his intentions now, despite West Ham having a small chance of still finishing fourth in the Premier League, by making a number of changes to rest players for Sunday’s 1-0 loss at Chelsea. Jarrod Bowen, Declan Rice and Michail Antonio will certainly expect not to be on the bench tonight for what promises to be one of the biggest night’s in West Ham’s short history at the London Stadium.

2 hours to KO: Good evening. A big opportunity for the two unfancied sides here to reach a major European final, not something that comes around often. Seventh in the Premier League against ninth in the Bundesliga with both teams having the carrot of knowing that if they triumph they will be just one game away, when the final is played on May 25 in Tirana, from not only winning a major trophy but also qualifying for next season’s UEFA Champions League.

How to watch West Ham vs Eintracht Frankfurt

USA: In the US, the match will be televised by TUDN and that channel is streamed on fuboTV, which offers a free trial to new subscribers. Paramount+ will have the English-language stream. 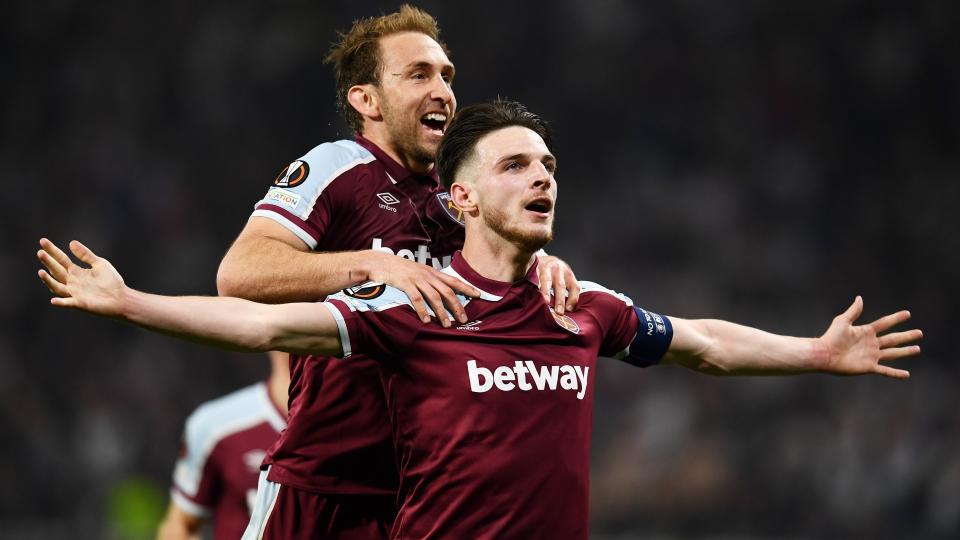 West Ham go into this game with just one fit centre back, Craig Dawson. With injuries keeping out Issa Diop, Kurt Zouma, and Angelo Ogbonna. Dawson is expected to be flanked by Ben Johnson and Aaron Cresswell.

The three centre backs are the only expected absences for Moyes’s team, with Declan Rice and Michail Antonio among the players who Hammers fans will be counting on. Alphonse Areola has been West Ham’s goalkeeper for European matches.

Eintracht manager Oliver Glasner has a few concerns, with Kristijan Jakic and Evan Ndicka both suspended. Tuta is expected to feature along the backline as he returns from suspension, while Makoto Hasebe is likely to start on the left of the back three.

MORE: How many trophies have West Ham won? A complete list of major silverware

West Ham are touted as the favourites going into the first leg, and David Moyes will look for his side to maximise home advantage and take control of the series.

With both teams facing defensive reshuffles, and West Ham only having one recognised centre back, it’s interesting that the bookmakers are juicing the under entering the match.