Who is Calvin Austin III? Memphis receiver with blazing 40 time poised to go on Day 2 of 2022 NFL Draft

If there’s one thing the NFL thrives on on nowadays, it’s speed. Linemen are running sub-five 40 times, quarterbacks are expected to be able to make plays with their legs and their arm, and wideouts are getting faster than they have ever been before.

Enter Calvin Austin III, Memphis’ blazing wide receiver hoping to make the grade in the NFL. Austin wasn’t always destined for the NFL; the 23-year-old was a track standout who walked on to the Tigers football team as a freshman. He proceeded to light up the AAC over his next four years, racking up back-to-back 1,000 yard seasons in 2020 and 2021.

Austin’s frame is slight, but the two-time All-AAC receiver possesses a unique blend of speed and quickness, one that potentially has him poised to go in Day 2 of the NFL Draft. SN’s Vinnie Iyer has the Falcons selecting Austin with the No. 82 pick in his latest mock draft.

Sporting News breaks down what you need to do about the speedy wideout:

Austin is 5-foot-8, 170 pounds. Compared to the top wide receivers in this year’s draft class, Austin is short. However, he’s one of the fastest players in this year’s draft. After all, most receivers don’t double as all-conference track stars; Austin was part of Memphis’ 4×100 team that qualified for the NCAA Division I Outdoor Championships as a freshman and sophomore.

Speed kills in the NFL and if there’s one thing Austin knows better than most, it’s speed.

Austin starred at this year’s NFL Combine, posting the fifth-fastest 40 time and third-best among receivers at 4.32 seconds. For comparison, the Ohio State receivers projected to go in the first round, Garrett Wilson and Chris Olave, clocked in at 4.38 and 4.39, respectively.

Why did Calvin Austin III walk on at Memphis?

Austin isn’t your normal walk-on, admittedly. He dazzled at Memphis’ Harding Academy, just a 15-minute drive from the Tigers’ home, Liberty Bowl Memorial Stadium. He earned a three-star rating, according to 247Sports.

Austin always had his sights set on Memphis, he told the Daily Helmsman’s Molly Morrison last December. A scholarship offer never materialized, though.

He had plenty of suitors on the track, including the Tigers. So, Austin decided to stay home, on one condition: He would have to be able to play football, too.

The best Memphis football could offer Austin was a preferred walk-on role. Still, he took his chance and ran with it, literally, overcoming a dour first two seasons to become one of the Tigers’ best wide receivers in recent memory.

“It was my dream to stay in Memphis,” Austin said. “Obviously I didn’t want to walk on here, but it was either walk on here and actually love being here or go somewhere else where I probably wasn’t gonna be as happy. “

Austin shares a lot of similarities with another undersized receiver from an unheralded background: Tyreek Hill. Their Relative Athletic Scores — a metric that provides tools to contrast and compare player’s known measurables — compare quite favorably. 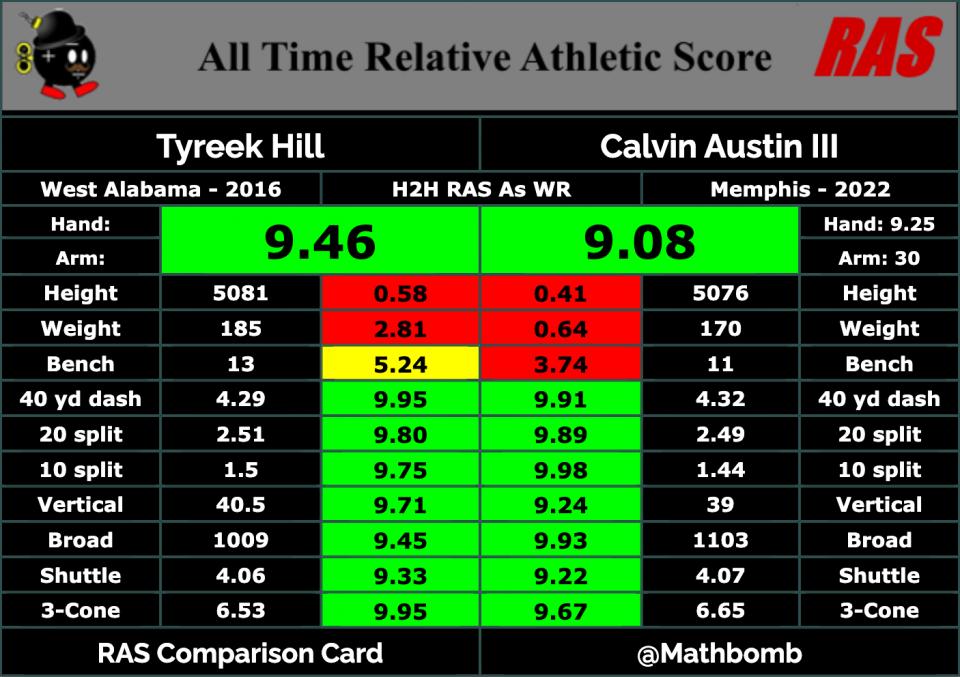 That isn’t to say that Austin is the next Hill — the recently traded Dolphins receiver is one of the league’s best players, an all-around dynamo capable of changing a game at any point. However, the success of diminutive wideouts like Hill and, to a lesser extent, Cole Beasley, offer a potential indication of what role Austin can play at the next level.

Austin is lightning in the open field, a fact he exhibited on this 69-yard jet sweep against Navy last season:

He profiles as a potentially dynamic kick and punt returner straight out the gate. His route-running has improved as well, according to Pro Football Network’s Joe Broback.

Take his showing in Memphis’ 2020 game with Cincinnati. Matched up against prospective top-10 pick Ahmad “Sauce” Gardner, Austin showed off a good understanding of how to leverage his release to isolate Gardner in the open field. Few can stay in front of Austin in a straight line, a fact he is well aware of. If his route-running continues to progress, Austin may be able to contribute as a slot receiver.

Does anyone have a ‘killer upgrade’ for Catalunya? Spanish GP talking points | 2022 Spanish Grand Prix

Errol Spence not concerned with Canelo, focused on Crawford fight

Does anyone have a ‘killer upgrade’ for Catalunya? Spanish GP talking points | 2022 Spanish Grand Prix

Errol Spence not concerned with Canelo, focused on Crawford fight