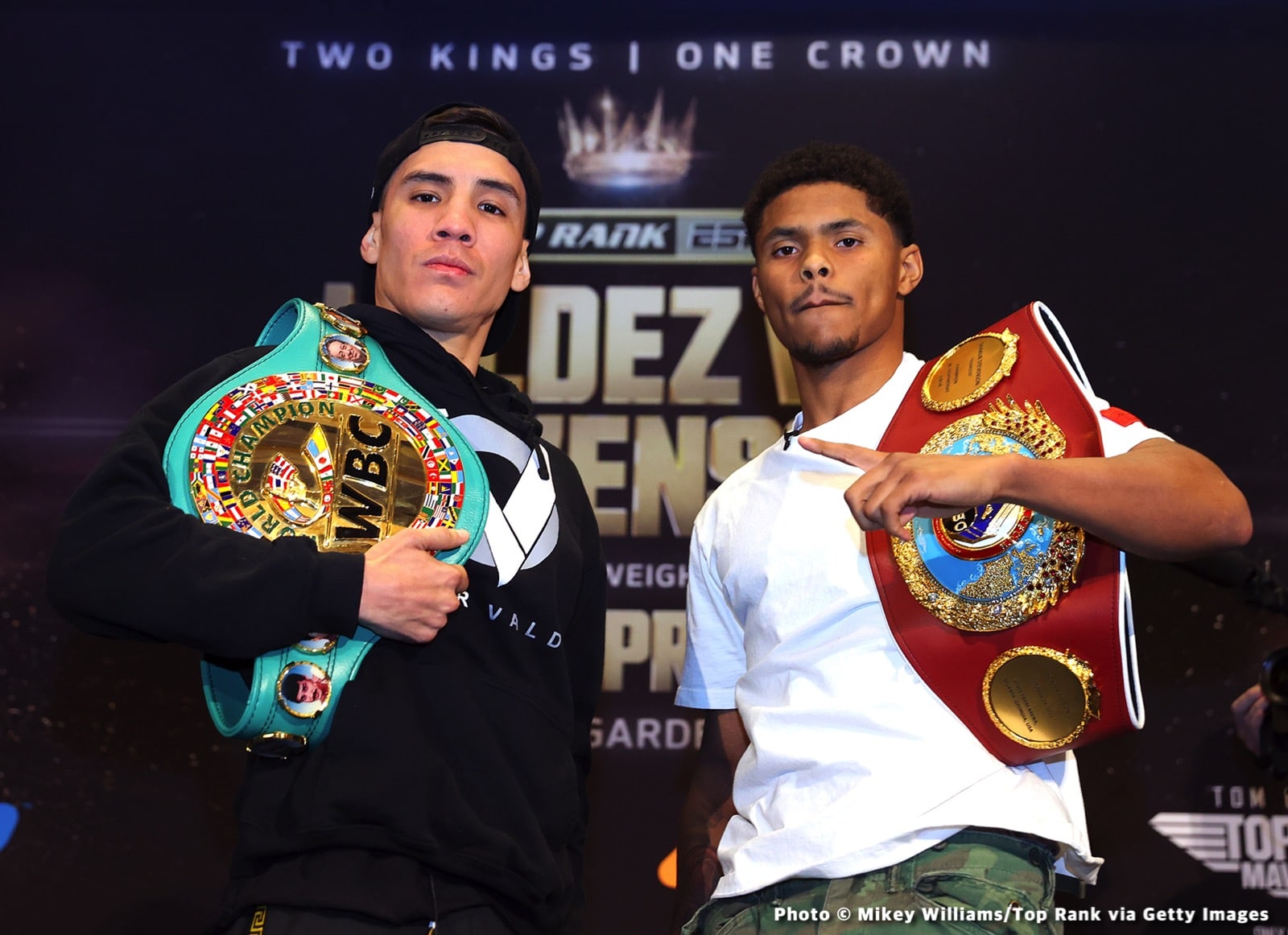 By Jack Tiernan: Shakur Stevenson says he’s going to become a superstar tonight by hitting and not getting hit against Oscar Valdez in their 130-lb unification fight on ESPN in Las Vegas.

There’s more on the line tonight in the Valdez-Stevenson contest besides the two super featherweight titles [WBC & WBO].

The fight has long-term ramifications in terms of turning the Valdez vs. Stevenson winner into the next star in the sport.

As a result, it’s imperative that the victor of this fight not only win but they make it exciting for the boxing fans at home.

WBO super featherweight champion Stevenson’s comment on Friday that he’s going to become the next star by focusing on hitting & not getting hit would suggest a wrong-headed approach.

Although Floyd Mayweather Jr. became a star by hitting the same defensive approach to his game as Shakur Stevenson, he didn’t adopt that approach until later in his career after he moved up to welterweight.

When Floyd fought at super featherweight, he was a brawler, knocking out talented fighters like Diego Corrales, and going to war with Jose Luis Castillo.

Valdez must crack the “code”

“Tim Bradley and I have been talking, Shakur, about what a fight like this can mean for either one of you guys should you win,” said Max Kellerman.

“In Tim Bradley’s case against Devon Alexander, in a fight similar in a sense of two undefeated fighters, fighting to see who the guy was back then [January 2011], but Tim Bradley didn’t emerge from that fight as a superstar because the fight wasn’t really exciting. Devon Alexander didn’t fight the way that people were hoping.

“On the other hand, Floyd Mayweather, in this weight division [super featherweight], and Diego Corrales linked up to unify the titles [in January 2001] 21-years ago, and Floyd emerged as a star because of his sensational performance,” said Kellerman.

What Kellerman is trying to make clear to Shakur is that he can’t adopt a safety-first style for his fight against Oscar Valdez tonight, otherwise he’ll get the same results as Tim Bradley, who failed to become a star after his win over Devon Alexander in 2o11 due to the fight being a dull one.

Although Bradley eventually became a star with a win against Manny Pacquiao in 2012, it could have happened a year earlier in 2011 if his fight with Alexander had been an exciting one with a lot of action.

Shakur to Hit & not get hit

“I’ll start with you, Shakur. What do you have to do to be a superstar after this fight is over?” said Kellerman.

“Perform how I performed in my last fight [against 36-year-old Jamel Herring] and the fights previous to that,” said Stevenson.”I feel like if I look like me, I’m going to be a superstar.

“I’m going to stay myself,  be natural, be Shakur and box, hit and don’t get hit. That’s my game plan and I can’t wait to execute it,” said Stevenson in making it clear he’s going to play it safe against Valdez tonight, and not take chances to entertain the fans.

“Oscar, what about you?” said Kellerman.

“For me, we know that Shakur is a tough fighter, he’s a two-time world champion,” said Oscar Valdez. “So, for me,  me winning this fight will put me in a closer position that I’ve always dreamed of being one of the top pound-for-pound and being listed as one of the great Mexican fighters.

“So winning this will put me at a higher step. I’m very excited about this, this is my moment, and I’m ready for whatever,” said Valdez.

“Oscar Valdez and Shakur Stevenson, these are the kinds of fights that boxing needs.  Two top undefeated fighters stepping in there to see who the very best in the world is,” said Kellerman. “I can’t wait to see this thing.”

Read: Errol Spence won’t fight Keith Thurman: “That mf wouldn’t utter my name when we was both champions”

Derby sink Blackpool to give travelling fans reason for cheer