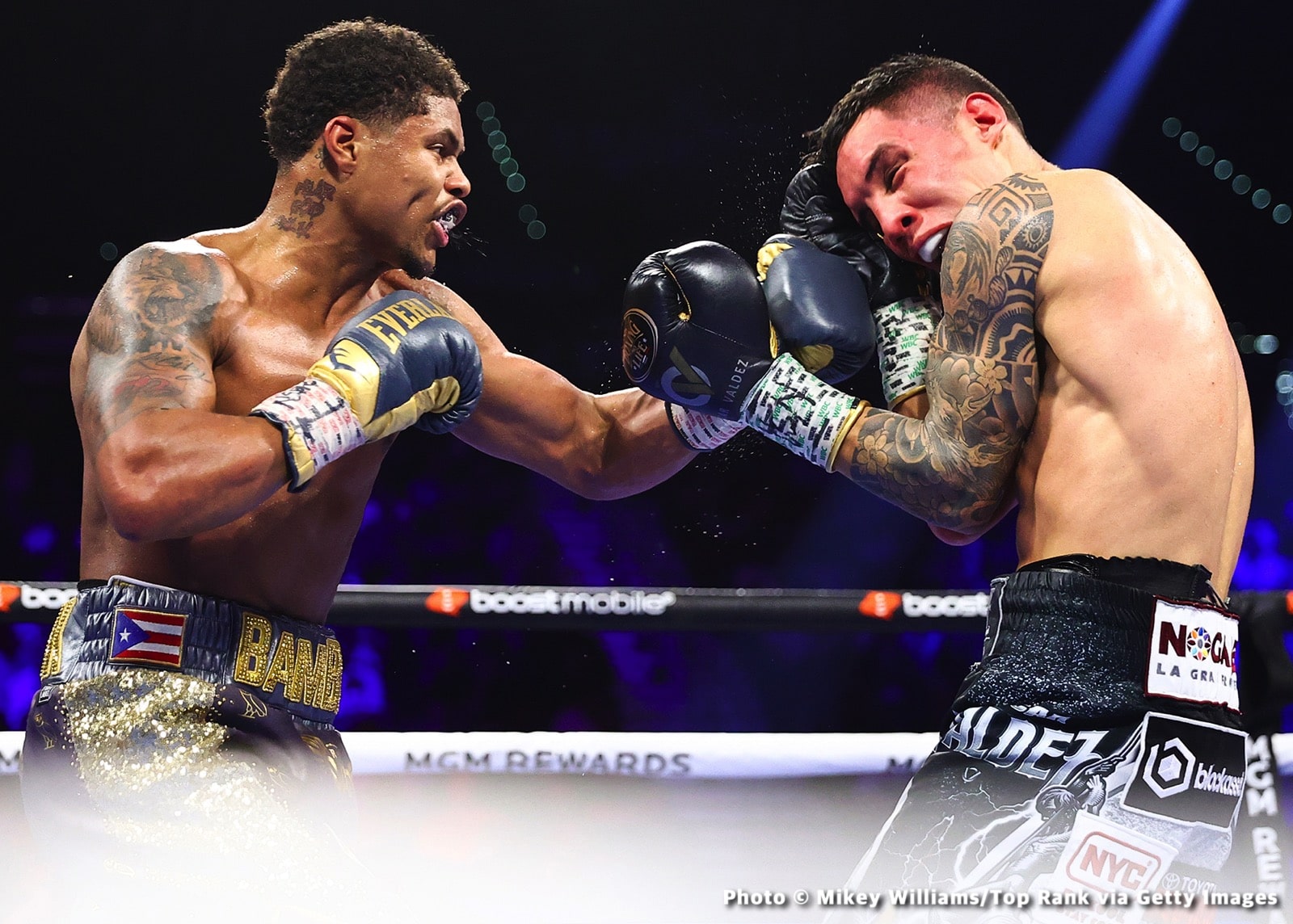 By Jim Calfa: Shakur Stevenson (18-0, 9 KOs) held onto his WBC super featherweight title, proving to have too much boxing ability for WBC belt holder Oscar Valdez (30-1, 23 KOs) in winning a one-sided 12 round unanimous decision in front of a loud crowd on Saturday night at the MGM Grand Garden Arena in Las Vegas.

As many expected, the 31-year-old Valdez was no match for the younger 24-year-old Stevenson, who looked huge inside the ring tonight.

There wasn’t anything Valdez could do to get close enough to land his right hand and left hook constantly.

It was an excellent move, but unfortunately, it was illegal, and the referee should have done his job to prevent that tactic from Shakur.

Valdez looked like he was in the ring with a welterweight, and he didn’t have the size or quickness to get at him. What the real clincher was that Stevenson was able to use a stiff arm, which prevented Valdez to get close to him to throw punches.

Stevenson held his lead arm far out in front of him, jabbing but not letting Valdez get near him.

For a fight of this magnitude, it’s surprising that Stevenson was allowed to use the stiff arm without being penalized or disqualified for the tactic.

“I want to say that I’m sorry for not getting the victory,” said Valdez after the fight. “I wanted to take it back to Mexico. We didn’t get the job done. I promised everybody that we would try hard.

In hindsight, you can argue that Valdez should have never taken this fight because it was apparent the moment the contest was made that he didn’t have a chance of beating the much bigger Shakur.

Valdez is an excellent fighter, but he’s no match for a fighter as large as Stevenson, who should at the very least be fighting at lightweight if not light welterweight.

You can understand why Shakur chooses to fight at 130, though, because he has a considerable advantage over everyone he faces. If Stevenson moves up to 135 or 140, his size advantage won’t be as significant, and he’ll take damage in those weight classes.

Valdez was knocked down in the sixth round when he was caught by a shot from Shakur while lunging in.

Other than that, no one was hurt in the fight. Valdez’s face on his left side was severely reddened from all the jabs that he was getting hit with by Stevenson throughout the contest.