The 2022 NFL Draft is complete, but there still is some unfinished business left in NFL free agency. The open personnel market will still be a factor as teams look for a few more veteran reinforcements through training camp.

Although the rosters are mostly set, every team has remaining holes, from starting options to depth. Injuries that are bound to occur between now and upcoming regular season also will prompt moves.

There are a couple of worthy quarterbacks that have yet to be traded. There are also several big-name aging first-round picks still available across positions.

Here’s where those notable players can still fit into a new team’s plans this year: 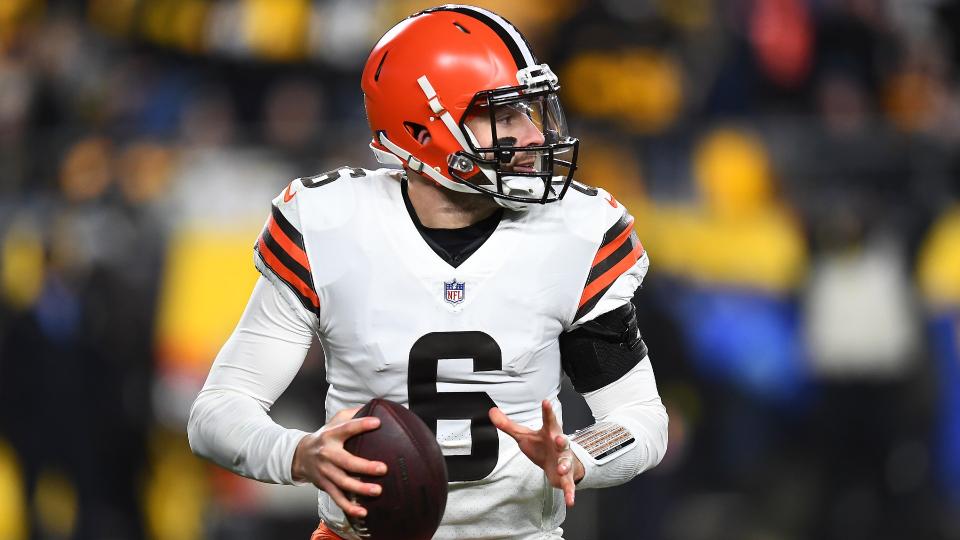 Seattle can’t be going into the season with Drew Lock as the unquestioned starting QB, can it? There are some reasons to believe Mayfield’s skill set isn’t a perfect fit, but then again the Seahawks are now committing to a run-heavier approach given how they improved their blocking and added a young potential feature back (Kenneth Walker) in the draft. Offensive coordinator Shane Waldron can help Mayfield with play-action concepts that play to his strengths to get the most out of his passing. The compensation is too reasonable not to take that shot.

Houston GM Nick Caserio and the coaching staff has shown confidence in Davis Mills and also could be looking ahead to bigger prizes in next year’s draft by not taking another QB in 2022. But Caserio, who was with the Patriots front office when they drafted Garoppolo eight years ago and should appreciate the immediate experienced upgrade he would provide. If it’s not the Texans, then the 49ers would be better off trading him during the season once they are comfortable to Trey Lance to a team thinking more about its 2023 starter such as the Buccaneers. 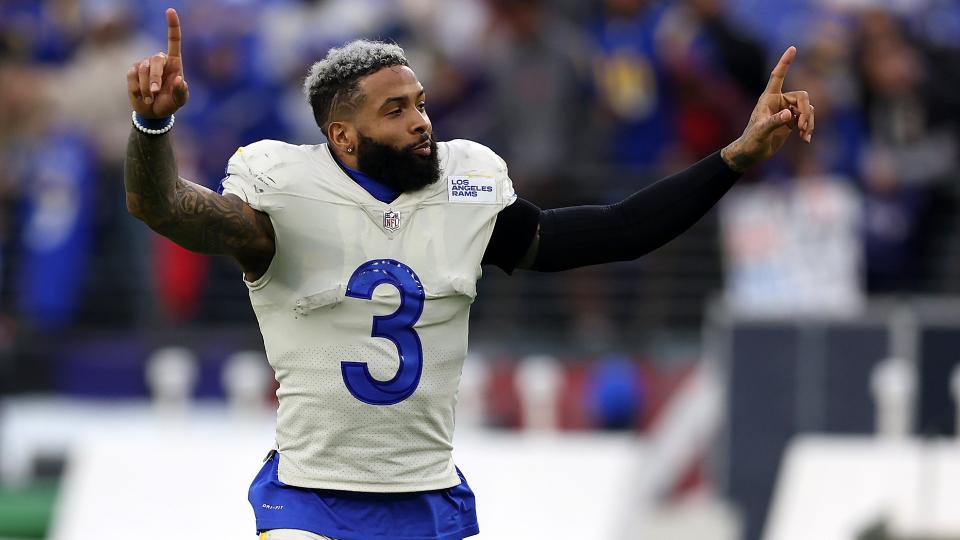 Green Bay has high hopes for second-round rookie Christian Watson and also addressed the position later in the draft with Romeo Doubs. But they are still green to the NFL and may need time to click with and be trusted by Aaron Rodgers. Allen Lazard and Randall Cobb are there and the team also signed Sammy Watkins but OBJ would provide a different kind of punch. The Rams were the better spot for him last midseason, but given he doesn’t had any options coming off his torn ACL in the Super Bowl, the Packers are positioned to acquire him as a cheap flyer.

The Bears have atrocious depth behind Justin Fields’ bona fide young new No. 1, Darnell Mooney. Former Chief Byron Pringle may be developing into a key target with growing chemistry with Fields and has inside-outside versatility, but the second-year QB needs a more established all-around presence who can consistently get open. Landry would be the ideal reliable short-to-intermediate option playing off Mooney.

There’s hasn’t been a lot of market buzz surrounding Jones, who is 33 and coming off a disappointing lone season with the Titans after being traded from the Falcons. He’s expressed wanting to play with rifle-arm QB and should be interesting in going somewhere where he could win big near the end of his career. The Chargers have some intriguing young options behind Keenan Allen and Mike Williams, but Jalen Guyton still is a shaky No. 3 and Josh Palmer needs more seasoning. Jones’ downfield strength savvy can add a key outside option opposite the big Williams most given Allen lines up most in the slot. 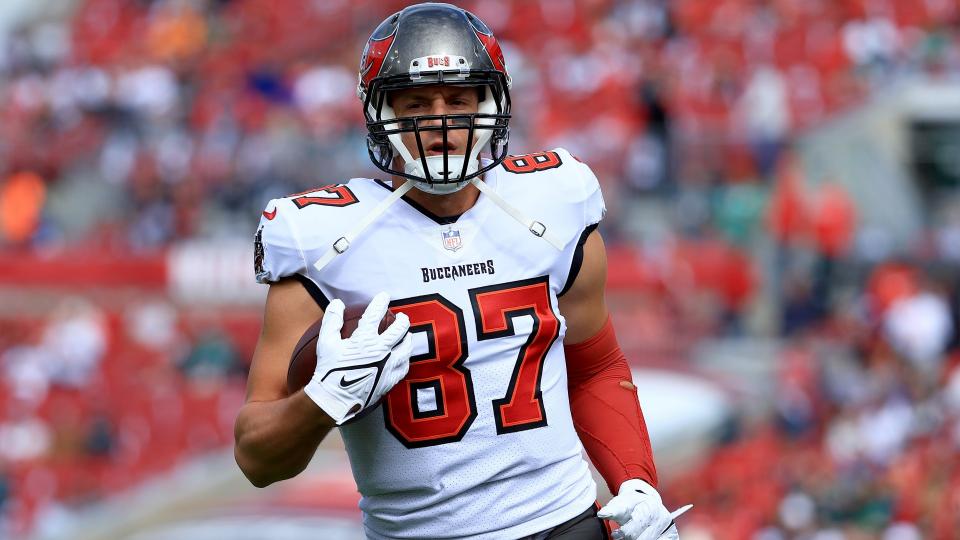 Gronkowski will boom with the Bucs just for his buddy Tom Brady again, or he will bust out of the NFL forever for real this time. He’s not returning to play for a different Super Bowl contender, especially back in the AFC with the Bengals or Bills.

The Colts may need to give Bernhard Raimann a little time to develop into a franchise long-term left tackle and Brown would provide them the easiest short-term solution for an AFC playoff hopeful team that cannot afford not protecting Matt Ryan well.

The tackle situation in Chicago is rather shaky as Teven Jenkins and Larry Borom are the current bookends in front of Fields. GM Ryan Poles did get a potential late draft steal in Braxton Jones, but he needs time to develop into a starter on either side. While a slot wideout such as Landry is key, so is getting at least a somewhat reliable veteran in pass protection. They’re setting up Fields for too many Year 2 lumps as it is. 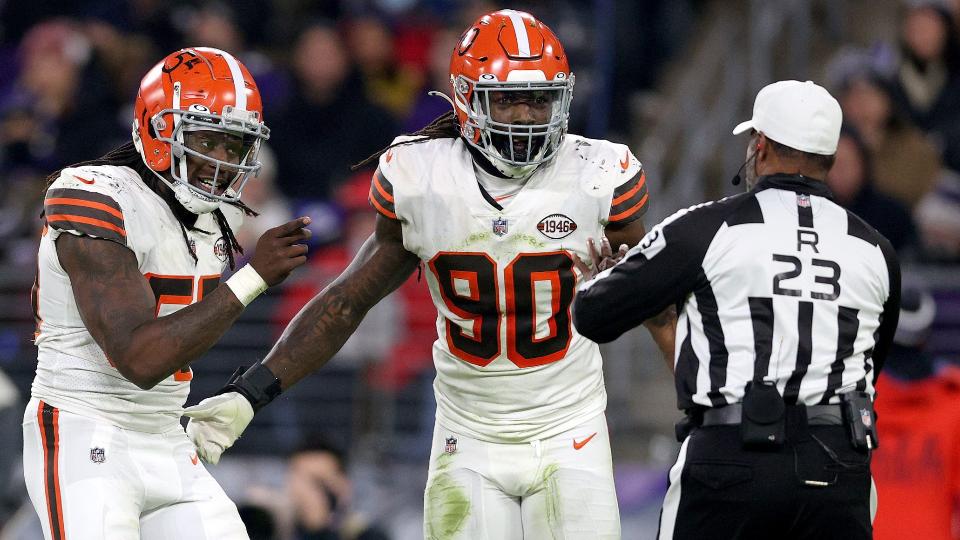 The Falcons drafted a potential immediate impact pass rusher in Arnold Ebiketie and a more developmental one in DeAngelo Malone. They also took a 3-4 outside linebacker flyer on former Giant Lorenzo Carter. But for a team that 18 sacks and also struggled to stop the run from the edge, Clowney’s 9 sacks with the 2021 Browns should be appealing, Dean Pees wasn’t in Tennessee in 2020 when Clowney was there but can get the most out of him in his scheme for a decent price. Also keep watching for a reasonable return to Cleveland.

The Ravens drafted Travis Jones to groom for either nose tackle or end in their 3-4, but with 2023 or 2024 in mind. Young starter Justin Madubuike has promise opposite Calais Campbell, but he still needs time to blossom. Campbell keeps plugging away, but he also could use more snap relief in his Age 36 season. Hicks, who had 5 sacks in a solid season with the Bears last season, shouldn’t still be available. The Dolphins are another to team to watch for his services.