Bivol says Canelo is his “enemy,” he won’t respect him 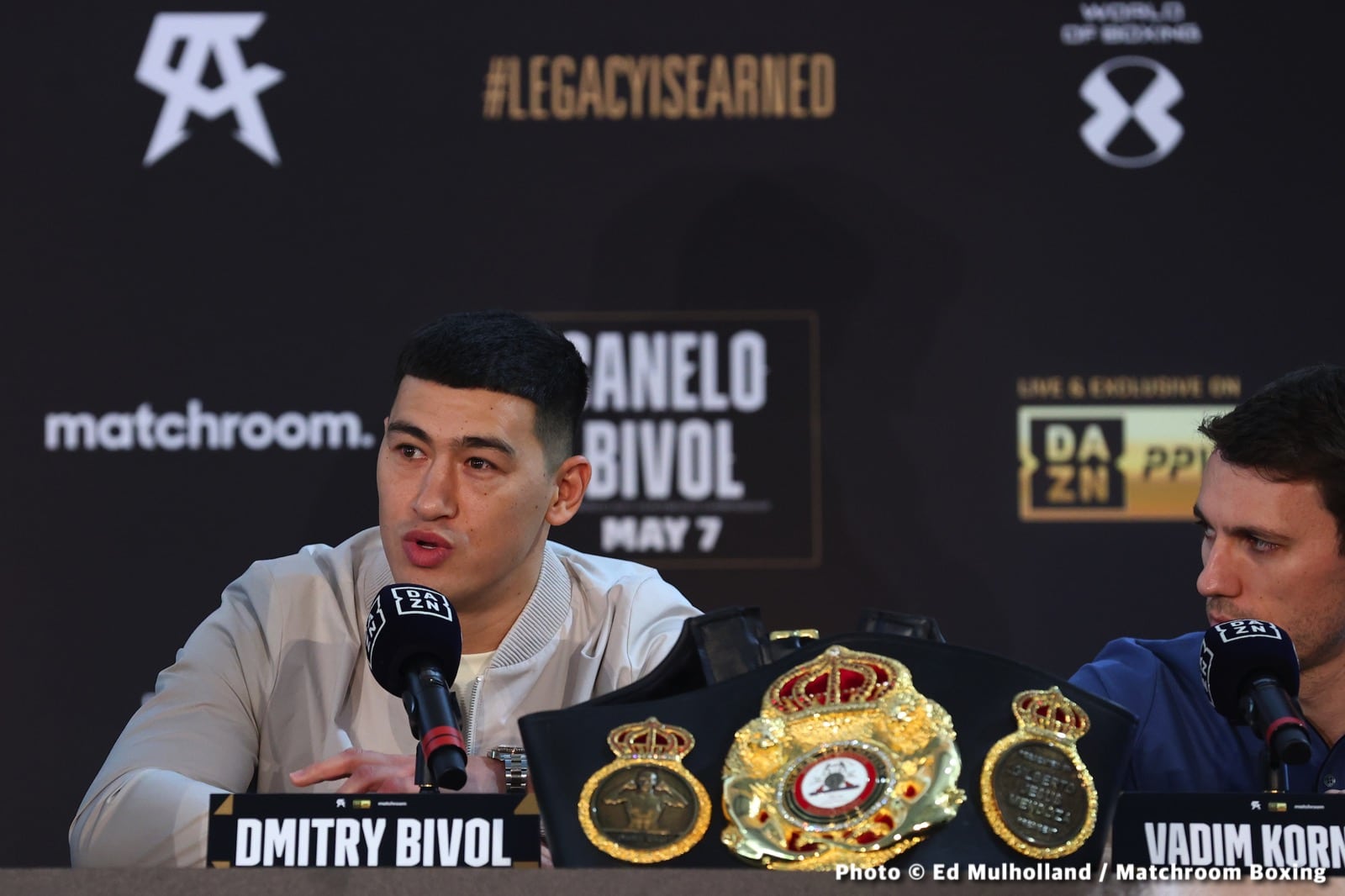 By Jim Calfa: Dmitry Bivol says he sees Canelo Alvarez as his “enemy” for their fight this Saturday night and he won’t be showing him the respect due to his popularity.

Bivol, 31, he’s going to make sure he practices good defense because he doesn’t want Canelo to land a lot of his shots in this fight.

For the casual boxing fans that have never seen Bivol before, they could be in for a surprise at what he’s able to do to Canelo. If Bivol is at the top for what he showed in 2019, Canelo will be in for a long night on Saturday.

“We will see on May 7th what I can do, but, of course, I will try my best,” said Dmitry Bivol to Fighthype about his title defense against Canelo Alvarez this Saturday.

“I hope, yes,” said Bivol when asked if he’s the type of fighter that performs at his best when facing better opposition. “Of course, I watched their fight in the real [Canelo vs. Sergey Kovalev], I was here.

“Yeah, Kovalev was good, but empty power. He did good. In every fight, you can see which, you can see some flaws.

“This is boxing, and a knockout can come in every second from both sides,” said Bivol when asked if he has the power to KO Canelo. “We just need to land our punch and don’t get a punch. It’s easy work.

“Boxing is easy. Punch harder and don’t get a punch and be focused every time. You ask me about strategy, eh? Let’s see this on May 7th. He has good boxing skills. It’s enough to be one of the best at 175.

“We don’t talk about who’s bigger or who’s taller. A giraffe is taller animal in the jungle, but it doesn’t matter. It’s something different that we should think about.

“It didn’t help me with this fight, but it helped me with my career,” said Bivol about his sparring with Gilberto ‘Zurdo’ Ramirez. “It helps you.

“The good boxer doesn’t get a punch, I think. You should have good defense. I try to show good defense in my fights and show boxing skills. This is why I’m one of the best maybe.

“My team believes in me, and they know I could beat Canelo Alvarez. I believe, why not? All my life, I believe in my skills and I want fights.

“Not too much. I respect him like my last opponent, but not more,” said Bivol when asked if he’ll have too much respect for Canelo on Saturday.

“Yeah, he achieved a lot, it’s hard, but he’s my opponent. I respect him but you’re my enemy on May 7th. I’m very glad that I will fight against the best fighter in the world.

“A fight against him will show me what my skills cost, and how good my skills. This is a big challenge for me. For me, it doesn’t matter. 175 or 168 because I don’t lose too much weight,” said Bivol when asked if he’s glad the fight is taking place with Canelo at 175 instead of 168.

“No, I have a lot of amateur fights, and usually we come to another country and everybody was against me. I won fights, and I got used to being in the ring with fans against you,”  Bivol said when asked if he’s worried about fighting in front of Canelo’s fans on Saturday.

NEXT: Dmitry Bivol has golden opportunity to upset Canelo Alvarez

Brian Castano quotes for May 14th fight against Jermell Charlo