SANTIAGO BERNABEU, MADRID — By the time Rodrygo etched his name into Real Madrid’s dizzyingly inimitable history forever, many of those in a state of utter bedlam had been here since late afternoon.

More than three hours before kick-off, the streets and bars around the Bernabeu thronged with people decked out in those famous white shirts. Names of heroes past were all over the back of many of them. Sergio Ramos and Cristiano Ronaldo were particularly well-represented.

Even at 4-3 down – only a goal, pah! – the Madridistas were ready for another hero, another Remontada, another night for the ages.

Despite president Florentino Perez’s determination to take his club out of the tournament and bring about its implosion, the Champions League remains Real Madrid’s competition.

And nights like this latest unbelievable semi-final heist against Manchester City mean it feels destined to always be this way.

MORE: The anatomy of a Real Madrid remontada

There have been bigger deficits overturned but the circumstances of this one might just outstrip all previous Madrid heroics. And, let’s face it, their resurrections in the previous two rounds against Paris Saint-Germain and Chelsea were faintly nonsensical.

The argument for this being the remontada to end all remontadas lies largely in the quality of the opposition and the match circumstances. City should have claimed a more convincing victory than the 4-3 margin from the opening game, where they merrily ripped into the newly-crowned Spanish champions from kick-off.

In fairness, this was a more even game and Madrid even had the best chance at 0-0, where Vinicius Jr. blazed wide at the back post inside the first minute of the second half.

But why on earth would you score in the first minute of a half when there’s final minutes and injury time to play around with?

City navigated those periods prior to remontada o’clock with the know-how of veterans despite the Champions League’s propensity for tormenting them and their manager. Kyle Walker waged a heroic battle with Vinicius and his own fading fitness until he had to leave with 18 minutes remaining.

A minute later, the visitors led on the night – Riyad Mahrez finishing sumptuously after Bernardo Silva was inevitably involved, given there seemed to be about four of the Portugal midfielder on the pitch at any one moment during the 90 minutes.

Then, in the last of those, substitute Rodrygo converted Karim Benzema’s flick-on and any flagging belief was back 100-fold. Both incredibly and inevitable, he headed his second beyond compatriot Ederson two minutes later. 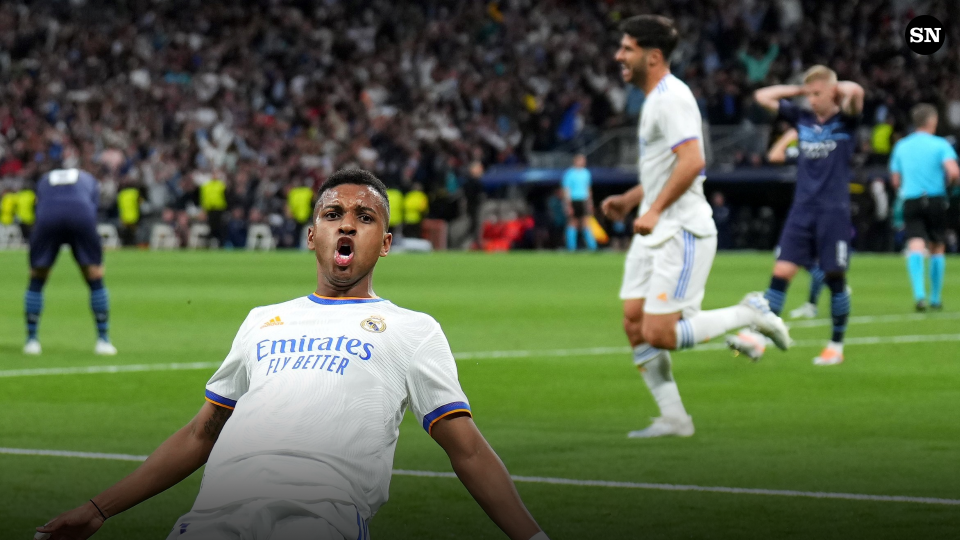 Ederson even had to make a smart save late in stoppage-time as everything around him unravelled completely. Pep Guardiola frantically beckoned his bedraggled players towards him at full-time as a riot of joy erupted all around him.

It was the first time Guardiola had come out of his dugout and not been hellaciously barracked – another thing that makes this so sweet for Madrid. The man who masterminded the greatest ever Barcelona, who wrought so much misery upon Los Blancos, was now enveloped in the darkest night of the soul.

It was only three minutes into extra time when Ruben Dias – recently back from his own injury lay-off and somewhere between rusty and floundering all night – blundered into Benzema to concede a penalty he was never likely to miss.

City will reflect on Jack Grealish twice going close at 1-0, when they appeared to be swaggering imperiously to Paris. You’d say “agonisingly close” but no one in blue knew agony in those moments like they would soon afterwards.

The ball flew into Ederson’s net, logic flew out of the window and yet it made perfect sense to the hysterical masses inside this football cathedral. City swung around with punch-drunk ambition but little else thereafter. Their race was run.

Madrid absolutely never know when the final stride of theirs is. Of course, they should be handily beaten in the final by Liverpool. Jurgen Klopp’s Reds are utterly magnificent and have surely had their quadruple hopes boosted by City’s Castilian nightmare.

But they shouldn’t have beaten PSG. Or Chelsea. Or City. Whatever it is in the bones of this famous old stadium, they need to bottle it and take it to Paris.

What channel is the FA Cup final on? TV, live stream for Chelsea vs. Liverpool

What channel is the FA Cup final on? TV, live stream for Chelsea vs. Liverpool