Nets star Kyrie Irving once again showed how lethal he can be when he gets in a rhythm during his team’s Game 1 loss to the Celtics in the 2022 NBA Playoffs.

Irving put together a scoring masterpiece, going off for 39 points on 12-of-20 shooting from the field, 6-of-10 from 3-point range and a perfect 9-of-9 from the free throw line. He scored 18 of his 39 points in the fourth quarter, single-handedly outscoring the entire Celtics team in the frame — until Jayson Tatum’s game-winning bucket as time expired.

The surgical performance had NBA Twitter buzzing, and LeBron James, who played alongside Irving with the Cavs from 2014-17, chimed in to remind everyone that Irving was left off the NBA’s 75th anniversary team that was honored at All-Star Weekend earlier this year.

There was plenty of discourse around Irving’s absence on the prestigious list at the time, but James’ tweet brought that argument back to the forefront.

Should Irving have made the NBA 75 team? Take a look at his case below. 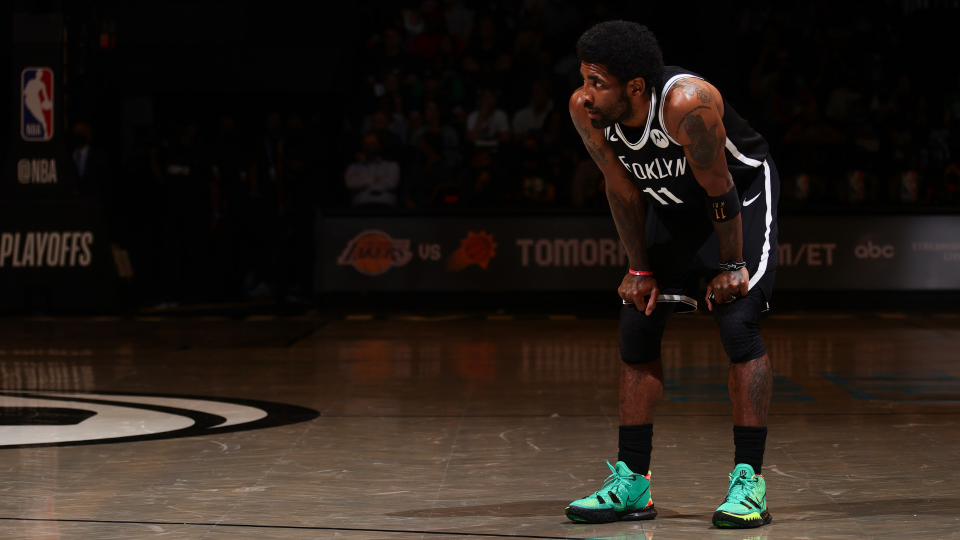 Irving’s case to crack the NBA 75th anniversary team is easy to understand.

Accolades aside, Irving has been one of the most prolific scorers in the league since entering the NBA in 2011. He has averaged 23.1 points per game over his 11-year career, and he has only had two seasons in which he averaged fewer than 20 points.

He’s a wizard with the ball, using arguably the best handles in NBA history to free himself up and knock down some of the most difficult shots you’ll ever see. His touch on layups and floaters around the basket gives him a case as one of the best under-the-rim finishers of all time.

When Irving finds his groove, there aren’t many players in NBA history who can score as smoothly, fluidly and easily as he does.

When you bring accolades and achievements into the argument, it certainly doesn’t hurt his case. While Irving has only made three All-NBA teams — none of which were first-team honors — he has been an All-Star in seven of his 11 NBA seasons.

And possibly the biggest boost to his case: Irving hit one of the most clutch shots in NBA history, knocking down the game-winning 3-pointer in Game 7 of the 2016 NBA Finals on the road against the Warriors, the team with the best record the league has ever seen.

MORE: Irving reacts to Boston’s hostile crowd: ‘I’m gonna have the same energy for them’

But as is the case with any of these arguments — whether it’s All-Star snubs, award snubs, etc. — if you’re putting someone on the list, you have to take someone off.

While the NBA’s 75th anniversary team didn’t guarantee a spot for every member of the 50th anniversary team, all 50 of those players still made it. So, who were some of the new additions Irving could have replaced?

The first few players that come to mind are Damian Lillard, Reggie Miller and Anthony Davis.

Starting with the oldest of the trio, Miller was only a five-time All-Star and three-time All-NBA selection, and he never won an NBA title. However, his standing as one of the greatest 3-point shooters ever and a true pioneer in the evolution of the game could be seen as a reason to put him above Irving.

Davis has one more All-Star appearance and All-NBA selection than Irving. He also has four All-Defensive team selections and matches Irving with one NBA title. His contributions to the defensive end likely give him the edge over Irving.

Lillard is a curious case given he is from the same era and plays the same position as Irving. Lillard has two fewer All-Star bids than Irving, but he has made two more All-NBA teams. Lillard’s career averages are higher than Irving’s, as are his career totals, but he’s missing the Larry O’Brien trophy that Irving possesses.

You could swap Irving for any one of those three players, but you also have to consider other all-time greats.

Would Irving have even been the next man up? The lengthy snubs list includes deserving names like Dwight Howard, Pau Gasol, Tracy McGrady, Vince Carter, Klay Thompson, Chris Bosh, Tony Parker and more.

Irving, himself, spoke on the topic back at the time of his omission, stating, “I think I’ll leave it to the conspiracy theorists. I think I was on the list, but I guess I’m not. Maybe I’ll just wait 10 years, 20 years from now, hopefully with a few championships under my belt.”

If everything goes according to Irving’s plan and he collects another championship or two, he’ll be impossible to leave off the NBA’s next anniversary team.

The anatomy of a remontada: History and myths of Real Madrid's famous European comebacks