Why Deandre Ayton’s dominance in Game 1 could spell doom for Mavericks in series vs. Suns

Welcome to “One Play!” Throughout the 2021-22 NBA season, our TSN staff will break down certain possessions from certain games and peel back the curtains to reveal their bigger meaning.

Context: It wasn’t Chris Paul or Devin Booker who led the Suns in their Game 1 victory over the Mavericks. It was Deandre Ayton.

In 33 minutes of play, Ayton scored a team-high 25 points, pulled down eight rebounds and blocked one shot. He only attempted one free throw, but he shot an efficient 12-for-20 from the field.

That continues an impressive streak for Ayton that has him rubbing shoulders with a certain eight-time All-Star.

Ayton has scored at least 10 points on 60% shooting from the field in each of his seven games this postseason.

That ties Anthony Davis (2020) for the longest such streak in a single postseason in NBA history. pic.twitter.com/7MEAFSfqBA

The Mavericks didn’t have much of an answer for Ayton all game long, but there was one particular way he did his damage that could spell doom for Dallas in this series.

You know what that means — to the film room!

Breakdown: Jae Crowder brings the ball up for the Suns following a bucket from Luka Doncic.

On the court with Crowder are Paul, Booker, Mikal Bridges and Ayton. Paul makes his way to the right corner, Bridges fills the right wing, Ayton runs down the middle of the floor and Booker fills the left wing.

Crowder dribbles towards Booker and hands him the ball. 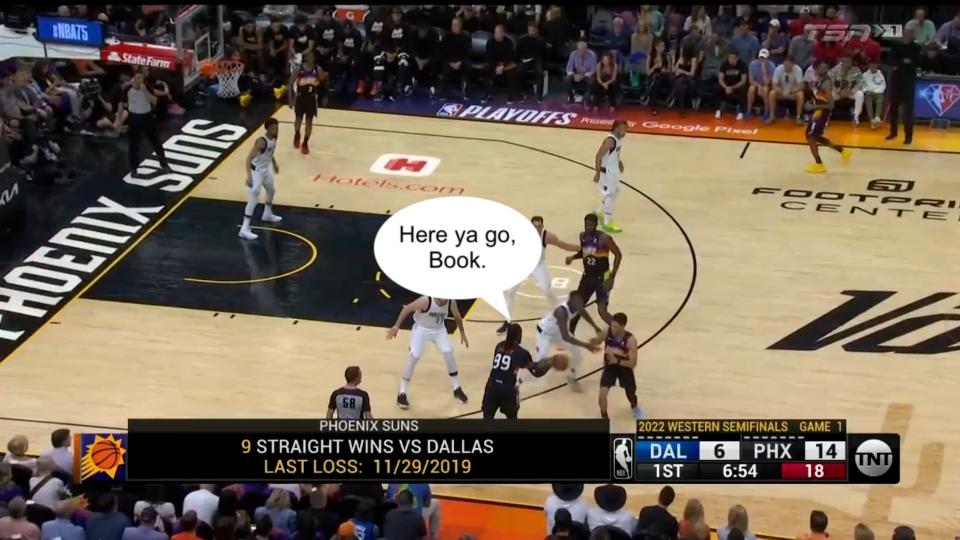 Booker is immediately presented with two options, as both Crowder and Ayton get in position to set a screen. 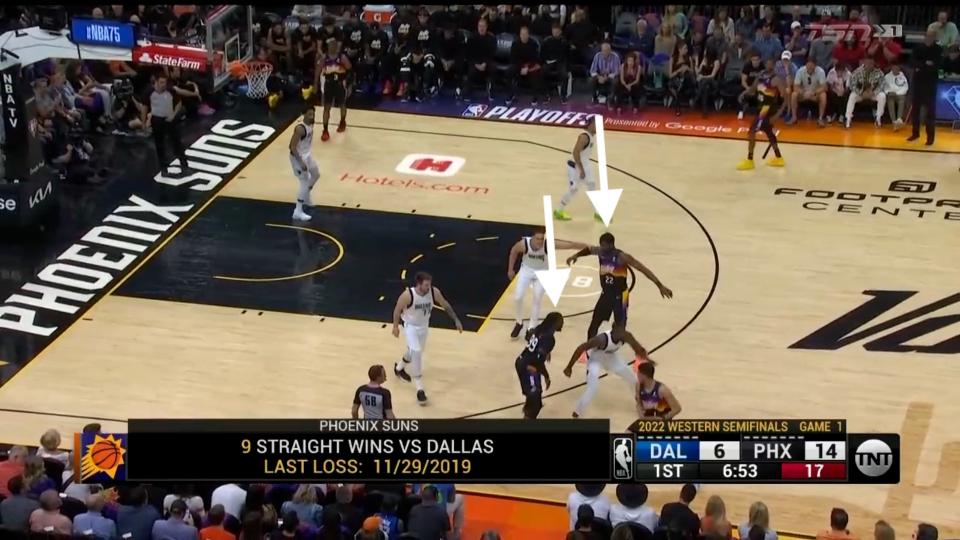 Crowder flips his screen at the last second, but Booker still decides to go to his left.

Doncic started the possession on Crowder, but he doesn’t even try to chase him out to the 3-point line when he picks and pops. Why? It looks like he wants to drop or switch to keep Booker from getting a clear driving lane to the basket.

Once Crowder pops, Doncic tells Dwight Powell, who is defending Ayton, to switch onto him. 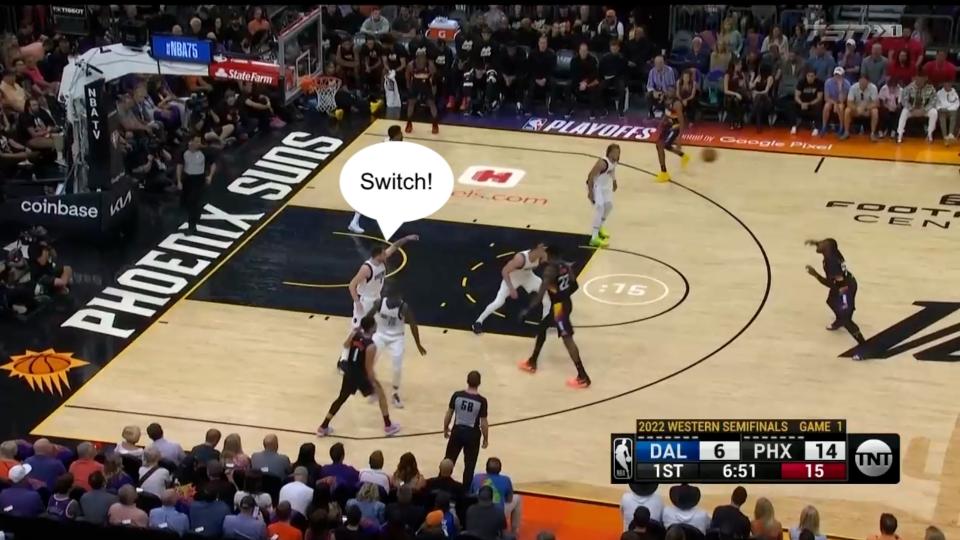 With Dorian Finney-Smith sticking to Booker, Doncic has no choice but to switch onto Ayton.

Doncic is big enough to defend outside of his position, but he’s giving up a solid four inches and 20 pounds to Ayton. Doncic tries to front Ayton to make up for the size difference, but there’s nobody in help position behind him because, well, his teammates don’t want to leave Booker, Paul or Bridges open for obvious reasons.

Crowder reads the situation perfectly and lobs the ball over Doncic, setting Ayton up for an easy layup. 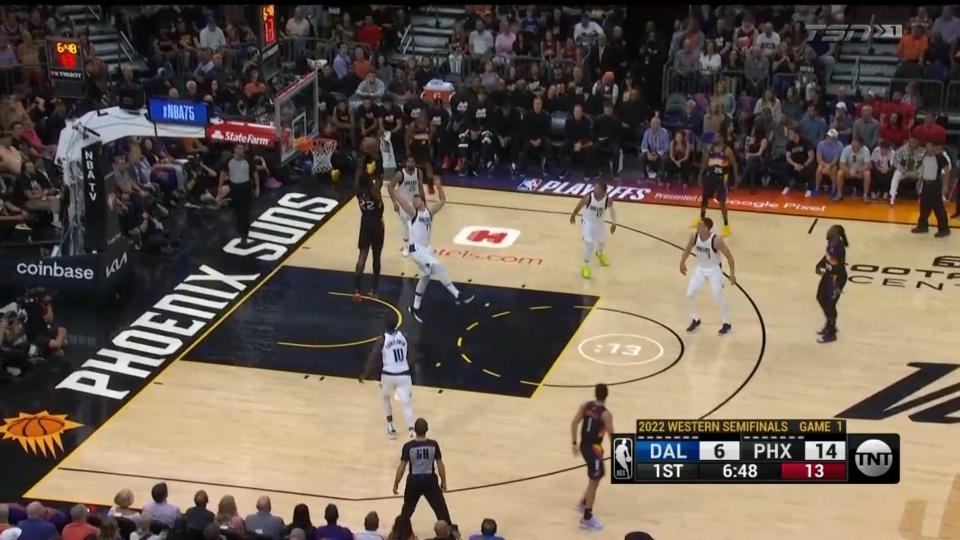 Why it matters: Jason Kidd warned the Mavericks of this.

In the lead-up to Game 1 of the Western Conference Semifinals, Kidd was quite blunt when discussing the difference between the bigs on the Suns and Jazz.

“They can hurt you in the paint with JaVale [McGee] and Ayton,” Kidd said. “This isn’t [Rudy] Gobert or [Hassan] Whiteside. These guys can put the ball in the basket. So, our bigs are going to be tested.”

To put it simply, Gobert and Whiteside are more defensive-minded centers, whereas Ayton in particular is a much more gifted offensive player.

As you can see in the table below, Gobert and Whiteside didn’t come close to matching both of those figures.

There are other parts to Ayton’s game, but it’s the pressure he puts on teams in the post and as a roller that makes the Suns such a tough matchup. Teams have a hard enough time chasing around Paul and Booker, both of whom will likely make an All-NBA team this season. It’s when they pay too much attention to either one of them that Ayton shines.

Whenever his defender switches onto Paul or Booker, Ayton wastes little time establishing himself in the post. He’s not the bruiser that Embiid is, but he can still overpower smaller defenders. Ayton also has one of the best hook shots in the game today. According to NBA.com, he went a cool 93-for-141 (66.0 percent) on hooks during the regular season.

This has become almost automatic for him:

If teams double, trap or hedge Paul or Booker, Ayton plays the gaps well on rolls and cuts, and he makes himself a big target. He has a reported 7-foot-5 wingspan and catches nearly everything. If he’s open, he’s not hard to spot.

You can see the headaches that cause teams on possessions like this:

Doncic doesn’t want to switch onto Ayton, so Powell has the nearly impossible task of stepping up to prevent Booker from turning the corner and recovering in time to prevent Ayton from getting an alley-oop. That would be a tough ask for anyone.

Now that they’ve gotten a taste of it, it’s safe to assume that the Mavericks will be better prepared for all of those little things in Game 2. Whether or not they have the personnel to come up with an answer remains to be seen.

French Open 2022: Who are the predicted seeds for the women's singles?