I’m old enough to remember when James Harden was one of the most prolific scorers in the NBA. A three-time scoring champion who could go for 40 points on any given night in his sleep.

It’s hard to believe that was just two seasons ago because this Harden is not that Harden.

With Joel Embiid sidelined for Games 1 and 2 due to an orbital fracture and concussion, the 76ers desperately needed the former MVP to turn back the clock to those unstoppable scoring days. Harden could not channel that version of his former self and as a result, the 76ers head back to Philadelphia trailing the Heat 2-0.

MORE: Will Embiid return in Conference Semifinals vs. Heat?

In Game 1, the 76ers actually held a one-point lead over the Heat and Harden made solid contributions, going for 12 points and three assists. In the past, we would see him turn things up a notch in the second half and really enter attack mode, but instead, he tallied four points on just four (!) field goal attempts as the Heat ran away with an easy victory.

Game 2 on Wednesday was a mirror image.

Harden looked more aggressive in the first half, going for a game-high 16 points to go with five assists while getting to the free throw line more times (5) than he did in all of Game 1 (4). The 76ers still trailed by eight, needing even more from the All-Star guard in the second half and Harden couldn’t deliver.

For the second-consecutive game, Harden was held to just four points in the second half, going 1-for-5 from the field while only getting to the free throw line four times. The 76ers were handled by the Heat, as Miami cruised to another double-digit win to take a 2-0 series lead.

His second-half shot chart looks like that of a role player who only plays a handful of minutes off the bench. 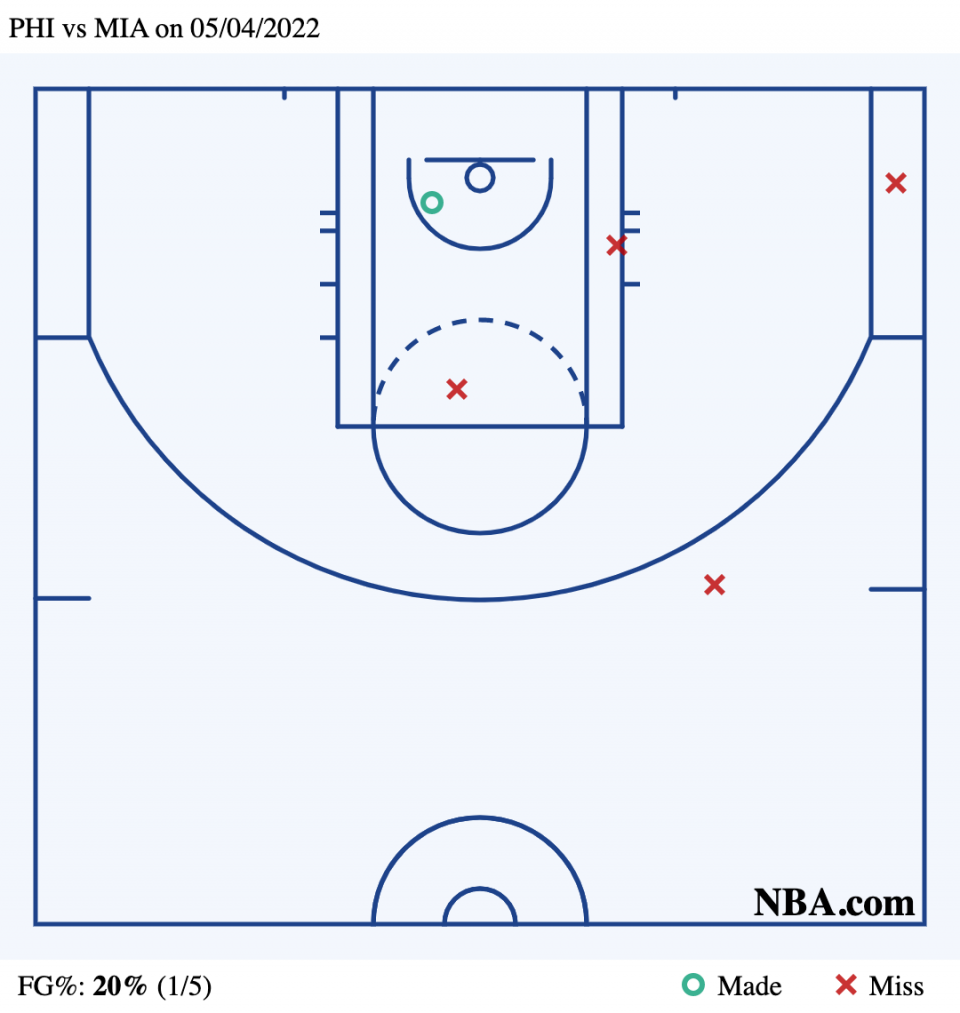 Harden has looked like a shell of himself, and JJ Redick’s comments on NBA Today have perfectly depicted what we’re seeing from the once-unguardable scorer.

“At this point, James (Harden) is primarily a playmaker and facilitator for others. … He is just not an efficient scorer,” said Redick as he spoke the hard truth.

The numbers back that up, too.

For starters, Harden has been held under 25 points in 12 consecutive playoff games – the longest stretch of his career.

In his 29 games with the 76ers since the trade deadline, Harden has zero (!!) games with at least 20 shot attempts, per StatMuse.

We’re talking about the same player who, during his run of three consecutive scoring titles from 2017 to 2020, averaged 22.3 shots per game. And again, his last scoring title was only two years ago.

What’s even more alarming is how Harden has failed to adapt his playstyle without Embiid by his side.

Down an MVP candidate and leading scorer, you would expect Harden to look to score every time down the floor. Instead, his scoring and assists averages and free throw rate have gone down while only attempting less than one field goal or 3-pointer per game.

Even if Embiid comes back, this version of Harden will not get the 76ers to the Eastern Conference Finals and beyond. If the 10-time All-Star can’t get himself back on track as a scorer, Philadelphia’s season will be over sooner than later.

Anthony Joshua reveals gameplan for rematch with Oleksandr Usyk: “Go for the knockout”