Justin Rose has no immediate plans to play in the Saudi-backed LIV Golf Invitational Series – but says he “does not think any less” of the golfers to have sought permission to feature in the lucrative rebel league.

Lee Westwood and Phil Mickelson are among the players to have requested releases from the PGA and DP World Tours in order to compete, with the first event scheduled for Centurion Club in Hertfordshire next month.

Rose told Sky News those players are “running a risk” with their futures amid warnings of lifetime bans from the PGA and DP World Tours and that his focus is winning “big championships” and “creating his own history”.

The 2013 US Open champion, 2016 Olympic gold medallist and former World No 1 said: “I am not [going to play in the LIV Golf Invitational series], not this season, not in the foreseeable future. 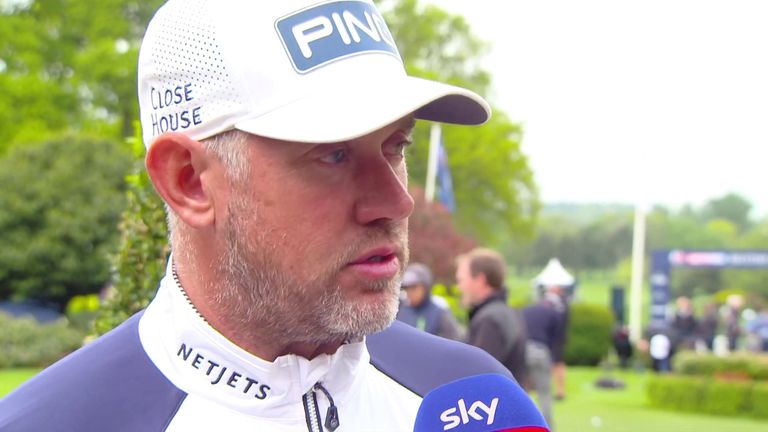 “I am curious, as everyone is, to see how this plays out and I don’t think any less [of the players hoping to play]. I have no judgment on that. I have played golf in Saudi Arabia.

‘Players are a running a risk’

“You have to make decisions that are right for you. You are a professional golfer, it’s your job. If there is an opportunity and it is valid, then it is an avenue that should be open and available to you.”

On whether players could feature in the Saudi-supported league and other tours, Rose said: “That is the eternal question no one knows the answer to. “This is the risk those guys are running at the moment by accepting the opportunity to play. We don’t know how the tours are going to react or the legal ramifications.

“My goals are still the major championships. I am still trying to create my own history within the game of golf. I am not ready to just play golf for money, for example.

Lynch: Westwood has announced himself as a willing stooge

Westwood defended his decision to request to play in the LIV Golf Invitational Series next month and said he believes golf has been scrutinised more than other sports for its links to Saudi Arabia.

Golf journalist Eamon Lynch was critical of Westwood’s action and comments during an appearance on the Golf Channel.

“For that, they need two things, money – of which they have plenty – and willing stooges, of which Lee Westwood has just announced himself to be one.

“When he says Formula One and Premier League soccer have taken the money, that’s sports washing in evidence right there. That’s the point of sports washing, so that the next guy they try to buy off to pay for his conscience will say, ‘well somebody else has taken the money so why shouldn’t I?’

“I was really struck by whenever he said of the Saudi Arabian regime, ‘they know they have issues, they’re trying to improve.’ Well perhaps one way Lee Westwood could help his buddies improve is telling them not to execute 81 people in one day, stop firing missiles at civilians in Yemen, but Lee Westwood wants to take a cheque to play a golf tournament, and then say he’s somehow contributing to the improvement of the lives of people in Saudi Arabia, which it’s not.

“He’s right, every other county has issues too, but they’re not all trying to use golf to distract from those issues.”

Rose: I feel I have ‘special moments’ ahead of me

Rose’s last win came at the 2019 Farmers Insurance Open and he missed the cut at The Masters in April – but the 41-year-old, now 62nd in the world rankings, feels he still has “special moments ahead of me”.

The Englishman added: “I am going through a transition. I have changed coach recently and I am really excited about the journey. I feel energised. I want to be practising. I am hungry and motivated.

“I am 41 so time is not 100 per cent on my side but I am still in that window where I 100 per cent believe I have some special moments ahead of me.

“Missing the cut at The Masters was hurtful as it is a venue where I have had so much success and I pride myself on always playing well there.

“At the same time, these moments are the kick that you need. When things don’t feel good you have got to take action and that action for me is working in a better and smarter direction.”

Rose was speaking at the launch of a golf academy he has established alongside American Golf which is aiming to get five million people into the sport for the first time.

The initiative plans to give away more than 5,000 free lessons for school children during the first year and bring 18,000 young people onto the Justin Rose junior programme across the first five years.

Rose said: “It’s an extremely exciting time for the golf. Not only is participation up but the average age of players has decreased by five years to 41, plus 400,000 women have taken up golf for the first time since 2020.

“Encouraging young people to play golf will protect the future of the sport and schools are a crucial part of our outreach. It’s our vision to have golf on the P.E. curriculum.

“The Academy will enable more people to benefit from the social and health benefits of golf, as well as us uncovering future champions. Linking with American Golf to launch the Academy makes complete sense given its vast network of golf ranges and stores across the UK.”

Gary Favell, CEO of American Golf, said: “This is a landmark day for golf in the UK. Justin is an extraordinary player and a hugely inspirational ambassador for the sport.

“Our Justin Rose Academy has huge ambitions to accelerate golf participation, while changing the perception of the sport for good and making sure it’s accessible to all.”