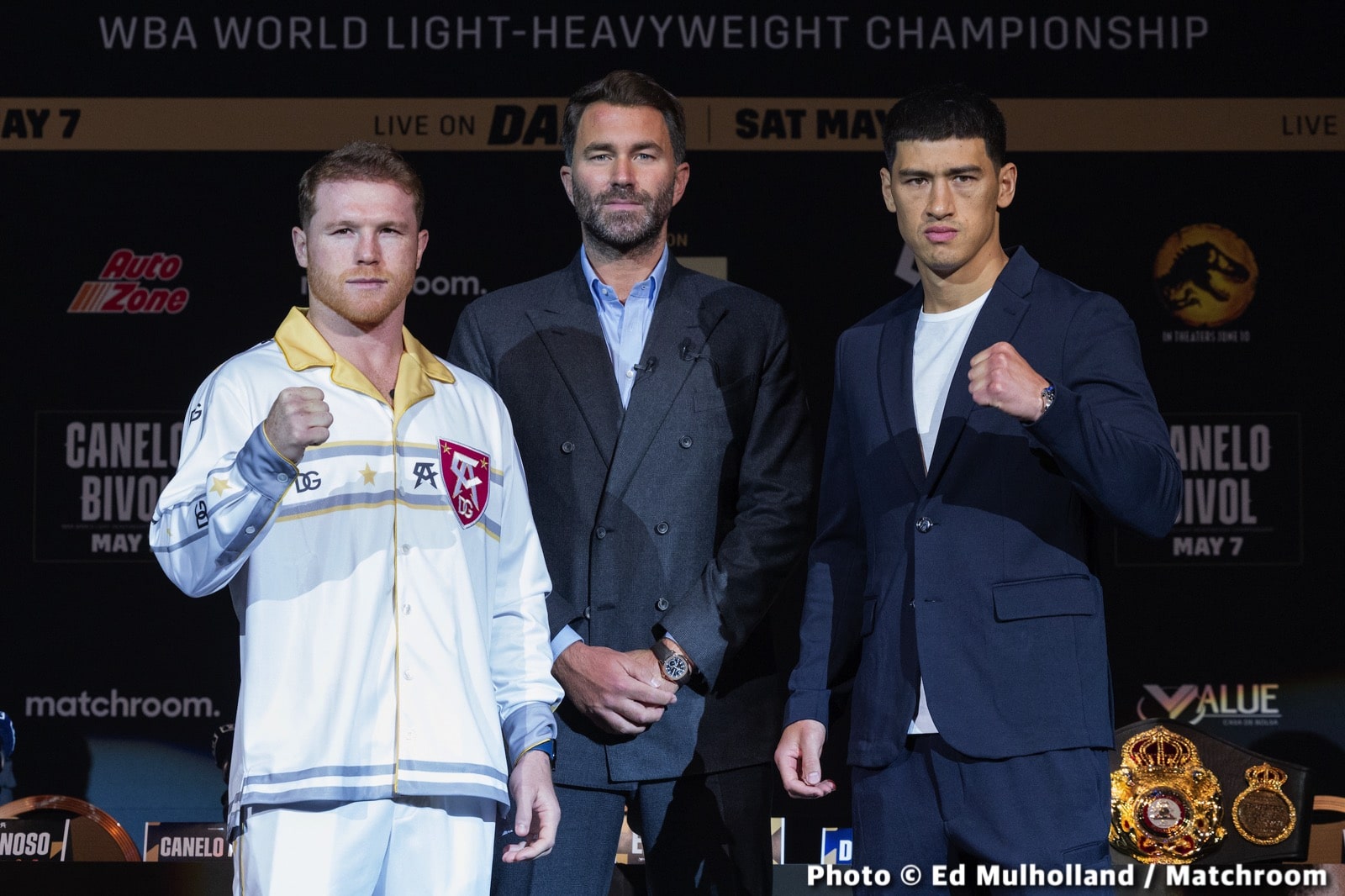 By Sal Arteaga: This Sunday, May 7th Canelo Alvarez will face Dmitry Bivol for the WBA light-heavyweight title. It will be
one of the toughest matches of his career. The reason being, it is at light heavyweight, a division Canelo has fought at only once.

Boxers are much stronger and heavier in this division. His previous bout at light heavyweight was against Sergey Kovalev, a match Canelo was victorious in, but one he struggled to
dominate.

Sergey Kovalev had limited success against Canelo, landing more punches in five of 11 rounds and outworking him with double the output (745 punches thrown Compubox). Canelo did look bothered at
times by Kovalev’s punches and may have been deterred at times, from going inside and attacking. It’s been nearly three years since Canelo last fought at light heavyweight, and he appears to have grown into a dominant super middleweight. The question is, will he have this type of success at light heavyweight?

Given his recent performance at 168, it appears he will be better prepared at light heavyweight this time around. His success will be predicated on his ability to absorb the punishment and the strength which he punishes his opponent in this weight class.

Bivol is a young, mobile, and strong boxer. He will seek to outpoint Canelo by boxing him with constant movement and going in and out, looking to connect, and avoiding his attack. Those who have defeated Canelo in the past, have done so, by following this strategy.

It would be surprising if Bivol deviated from this strategy, and instead chose to stay in the pocket with Canelo to trade punches, making it a slugfest. This would be advantageous to Bivol, only if his punches
phase Canelo, if they don’t, then he would fare better to make it a boxing match. If Canelo can absorbBivol’s punches as he did at 168, it will be a long night for Bivol.

If Canelo can absorb Bivol’s punches well, it will be his fight to lose, and he will be able to employ any strategy he chooses. Canelo was not phased by any boxer’s punching power at 168 pounds, and if this
continues against Bivol, he will not be deterred by any offensive/defensive strategy Bivol implements.

Canelo will be able to chase Bivol down and counter his attack. For as great a boxer Bivol is stylistic, it will not be sufficient to fend off Canelo. Canelo has faced mobile, agile, and quick boxers before. Bivol
will not be as nearly as fast, mobile or slick as those boxers Canelo faced in the lighter divisions.

Canelo cut the ring effectively enough for a victory against Khan, Smith, Saunders, and Plant. Bivol will look to box and fight on the outside. Canelo will need to cut him off, focusing his attack on Bivol’s body to slow him down and to minimize his movement. Bivol’s output consists mainly of his jab, and if Canelo can neutralize this punch by timing Bivol, his counterattack will be extremely effective.

If Bivol doesn’t possess dominant power, he won’t be able to keep Canelo at bay. His boxing skills alone won’t be enough to neutralize Canelo.

It takes superior agility, speed, and mobility to outbox Canelo
stylistically, and only two boxers did so effectively in Floyd Mayweather and Erislandy Lara. Saul will get off to a slow start, but once he has Bivol’s timing and rhythm, he will counterattack him effectively. It will be a chess match of calculated punches, but ultimately the stronger boxer will win.

Read: Devin Haney on George Kambosos fight: ‘I will come out victorious’