Day three ahead as McIlroy stutters through at Wells Fargo Championship

Jason Day, currently world No 127, is chasing a first win since his 2018 Wells Fargo Championship victory; Rory McIlroy 10 off the halfway lead after a three-over 73 – watch on Saturday live from 5.30pm on Sky Sports Golf 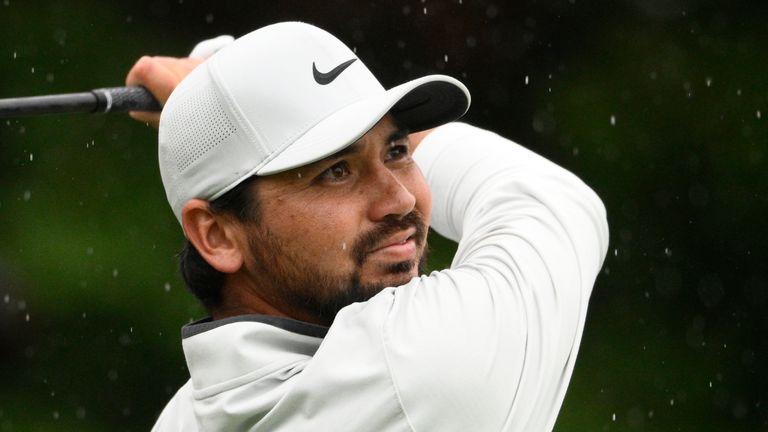 Jason Day battled tough scoring conditions to remain at the top of the leaderboard at the Wells Fargo Championship going in to the weekend.

Jason Day battled tough scoring conditions to remain at the top of the leaderboard at the Wells Fargo Championship going in to the weekend.

Jason Day holds a three-shot lead at the halfway stage of the Wells Fargo Championship, as defending champion Rory McIlroy stuttered into the weekend.

Day followed an opening-round 63 by mixing five birdies with two bogeys to post a three-under 67 in rainy conditions at TPC Potomac, bolstering the Australian’s hopes of a first PGA Tour since winning this event in 2018.

The former world No 1 is on 10 under and with a strong advantage over closest challenger Max Homa, who posted a four-under 66, with Denny McCarthy in a four-way tie for third alongside compatriots Luke List, James Hahn and Kurt Kitayama.

“It’s nice to be able to get in at 10 under through two rounds, especially with what kind of weather we’ve got coming in on the weekend,” Day said. “I’m looking forward to it. It’s nice to be back in the mix, nice to be leading. There’s still two more days left, so I can’t get too far ahead of myself.”

English pair Tyrrell Hatton and Matt Fitzpatrick are six strokes back after rounds of 66 and 68 respectively, while Sergio Garcia – who caused controversy with his comments about the PGA Tour during his opening round – declined to speak to the media after a second-round 71.

Rickie Fowler is also on two under after a two-over 72, while McIlroy now faces a tough task to win the event for a fourth time after a three-over 73 left him on the cut-mark and 10 strokes back.

McIlroy missed from four feet to save par at the first and failed to take advantage of the par-five next, before falling further behind when he found water off the tee at the par-four fourth on his way to another bogey.

The four-time major champion dropped another shot at the sixth and reached the turn in 38, only to respond by rolling in a 10-foot birdie at the 10th and holing from 20 feet at the 13th to salvage a par.

McIlroy undid a birdie at the 14th by bogeying the 15th and 17th to leave him requiring a par at the last to avoid missing the cut, where the 33-year-old splashed out of a greenside bunker to seven feet and holing the putt to guarantee his passage into the final two rounds.

Due to further rain being forecast, the third round will be played as a two-tee start and is set to begin at 10.45am local time (3.45pm BST) on Saturday.