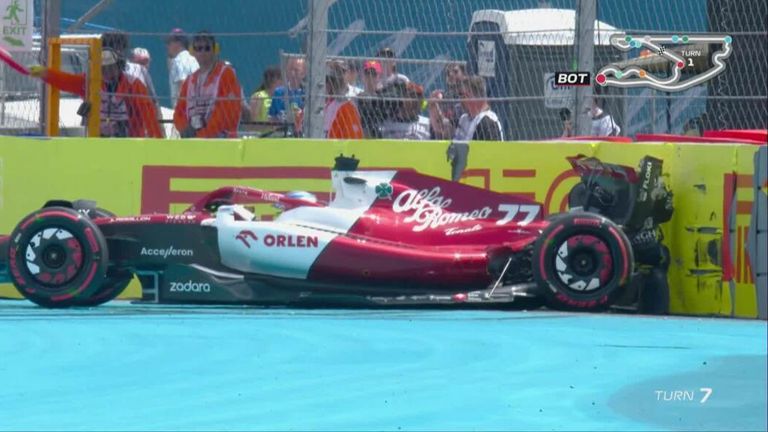 Valtteri Bottas pushes too hard on turn seven, crashes into the barrier and out of P1

Valtteri Bottas pushes too hard on turn seven, crashes into the barrier and out of P1

Charles Leclerc set the pace ahead of George Russell in an intriguing Miami GP opening practice as the first F1 session around America’s new street circuit saw Ferrari continue their 2022 form and Mercedes find theirs.

With drivers testing the limits of a 19-corner street circuit that surrounds the Miami Dolphins’ Hard Rock Stadium, there were incidents aplenty in the opening hour – with Valtteri Bottas crashing his Alfa Romeo – and the lead changing several times before Leclerc made his advantage stick late on.

Leclerc, the championship leader by 28 points, set the pace with a 1:31.098 in the Ferrari, driver and team bouncing back after a difficult Emilia Romagna GP.

Red Bull’s Max Verstappen had been fastest before dropping to third.

What was a big surprise from Practice One was the driver who split the title rivals, as Russell and Mercedes enjoyed an encouraging start to their Miami GP weekend.

Russell, driving an upgraded Mercedes as the team desperately try to fix their porpoising and salvage their season, was just 0.071s off Leclerc. Lewis Hamilton was only eighth, although had a compromised final lap.

“I think Mercedes are in play this weekend,” said Sky F1’s Karun Chandhok. “You can start to see them getting their season back on track.”

He added: “For the first time this season, we could have three teams in play for pole position rather than two.”