Kerr stunners help Chelsea to WSL title | Hayes: By far and away the best one

Two stunning second-half goals from Sam Kerr helped Chelsea to the Women’s Super League title, beating Manchester United 4-2 at Kingsmeadow, as Arsenal finished a point behind in second place after a 2-0 win at West Ham.

After clinching a fifth WSL title for Chelsea, Hayes described it as her best win yet, telling Sky Sports: “Relief, I say it every time we win. It’s out the way, hallelujah! We had to dig deep but we’ve done it all year.

“This is by far and away the best one. 2-1 down first half and then went on to win 4-2. We’re champions because of the second half of the season. We know how to get over the line.

“We can get it done, you can’t legislate that.” 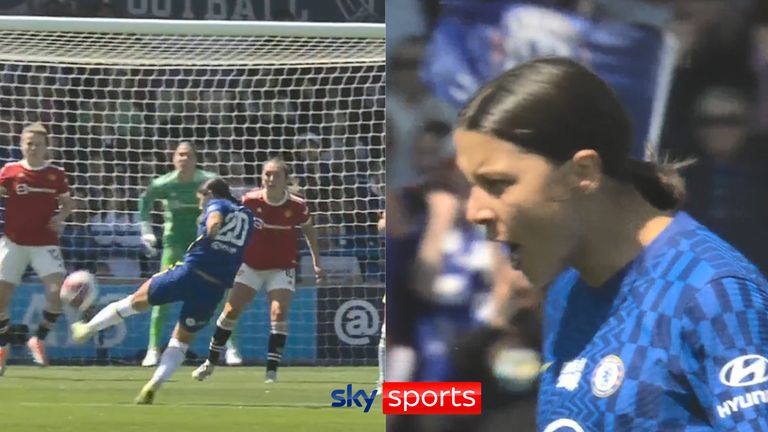 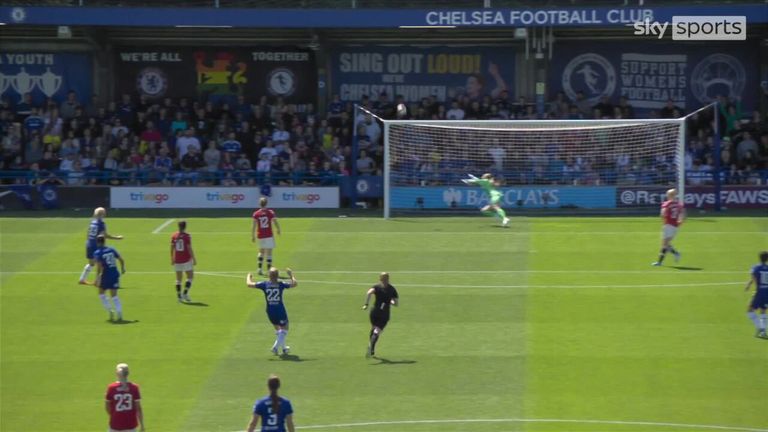 But it was heartbreak for Arsenal – who had spent 182 days at the top of the WSL table – and manager Jonas Eidevall described the team as ’empty’ after finishing second.

He told the BBC: “It feels very empty right now. I am very proud of the players how they handled the situation. We have been phenomenal.

“When you take 55 points, you know you can win it. We just feel empty that we didn’t do it.

“Obviously you can feel the atmosphere here at the stadium. You feel the tension during the game. You love it and it’s great to see how the players reacted under the pressure. I loved that.

“Of course, it’s emotional. It’s so hard to summarise at this moment. One part of me is so proud with what we achieved. We were pretty close to being unbeaten all season. Another part feels so empty to not get a trophy. This is a test for us. We need to keep believing and up our game next season.”

How Chelsea beat Arsenal to the WSL title 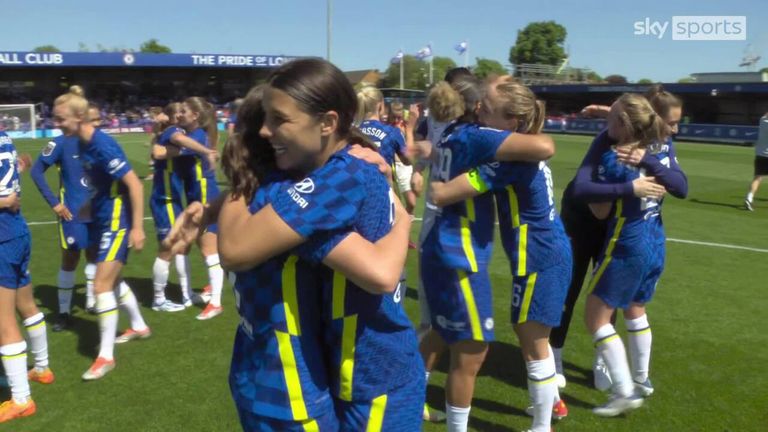 Chelsea did not make it easy on their way to a third successive WSL trophy – a record for consecutive wins – after a poor first-half performance.

Martha Thomas fired Man Utd ahead inside 13 minutes only for Erin Cuthbert to hit back with a reply five minutes later. But Ella Toone assured the visitors would go into the break 2-1 up with her 25th-minute goal.

Arsenal were held to a goalless draw in the opening 45 minutes, but were top of the table on goal difference at half-time.

But once again, Hayes made two title-winning substitutions at the start of the second half to turn the game on its head, introducing Beth England and So-Yun Ji for her final Chelsea appearance.

“The subs really impressed me,” Kelly Smith told Sky Sports. “Man United were all over Chelsea in the first half and she [Hayes] changed it slightly.

“She bought on Ji to get her on the ball and dictate the tempo in the middle of the park. Then England up top to try and hold the ball up and it really worked… Her tactical choices in the second half really made the game.” 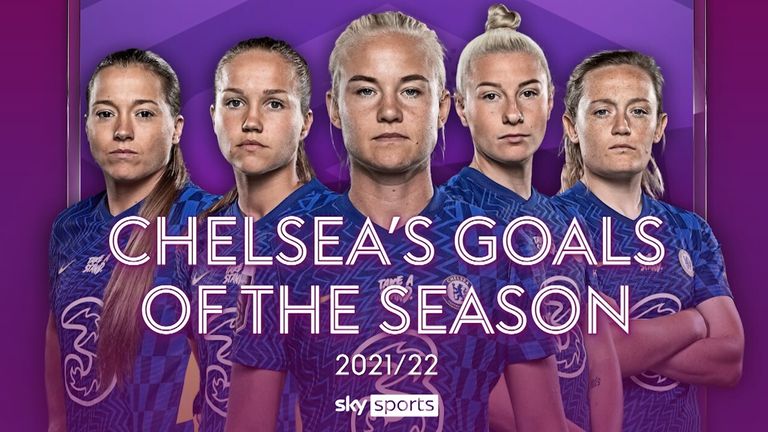 Kerr scored the first of her stunning double 47 seconds after the break as she volleyed a half-clearance into the top corner. Man Utd had struggled to deal with England’s cross from the right flank.

Guro Reiten then put Chelsea ahead for the first time in the game soon after. Ji slotted Pernille Harder through down the left, with Reiten sending the cross past Mary Earps.

But the goal of the game – and possibly the season – came as Kerr looped a stunning effort over Earps from range to seal the title for Chelsea. They were her 19th and 20th goals of the season, winning her the Golden Boot ahead of Arsenal’s Vivianne Miedema.

The Gunners scored both of their goals at the Chigwell Construction Stadium in six minutes, but it did not prove to be enough.

Stina Blackstenius scored with her first touch in the 60th minute before Steph Cately added the second, but Jonas Eidevall’s side ultimately finished a point behind Chelsea in second place.

The result at Kingsmeadow also sees Man Utd end the season in fourth place – pipped to third spot by local rivals Manchester City, who beat Reading 4-0 on the final day. West Ham end the campaign in a respectable sixth place.

Hayes: Subs made the impact we wanted 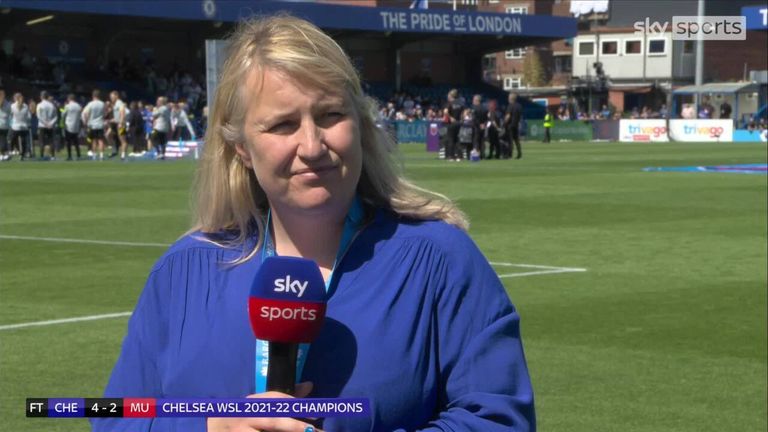 “I changed the shape [at half-time] and Beth and Sam ran the channels really well. Ji So Yun has a calf injury and she really put her body on the line.

“We were too back-footed in the first half. We had 3v3 in midfield but we were overrun. All the subs made the impact we wanted.

“I think Millie Bright has been unbelievable. Sam Kerr wins you games but Millie has been available every game. That leadership when Magda Eriksson was out was important.

“She’s not just a leader in the group but she can always find another level in herself.

“You don’t win the league on the first game of the season but to keep confidence high, you have to believe in the rotations.

“I miss my boy and I’m looking forward to a couple of months with him!”

It’s a second successive Golden Boot for Kerr after also netting 21 WSL goals in the 2020/21 season.

Perhaps most impressive about her haul is that none of her goals came from penalties – all 20 this campaign were from open play – as well nabbing four assists.

It adds to her Golden Boot from the Asia Cup, where she scored seven goals, and continues to rack up the air miles during international breaks playing for Australia. 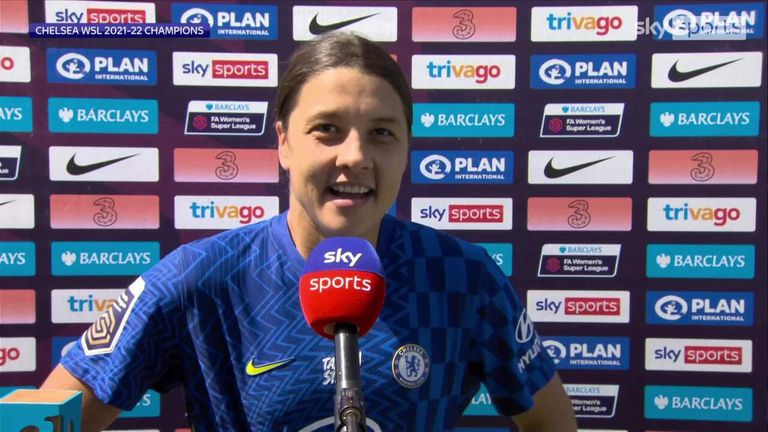 Kerr told Sky Sports: “The first half we played a bit nervous, the second half it was playing about how we play. That’s why we’re champions. When we play like that, no-one can stop us.

“I don’t care who scored! We won and that’s what matters. I actually visualised scoring crazy goals like that all the time. Guro headed it to me and I had a pop. I didn’t even know the goalkeeper was out.

“This is one of the best matches I played in Kingsmeadow. The Manchester United fans made it good to. I want to score as many goals I can, I just do what I can to win.”

Was this Miedema’s final game for Arsenal?

Transfer speculation continues to grow around Miedema’s future at Arsenal, and Sunday’s game could mark her final appearance for the club. She is out of contract this summer.

But the striker says she will now take a break before deciding on her future, telling the BBC: “I was focused on today. I will have a couple of weeks holiday and will make a decision then.

“I’m speaking with the club and Jonas Eidevall. I really want to win titles. This year I haven’t won anything. If I feel like the club is moving in that direction then maybe I stay another year or two years. Right now I have not made my decision.”

Eidevall added: “All football clubs are looking at the transfer window. The ambition is to be stronger for next season.

“Some of the things Vivianne Miedema does are astonishing. It was a stellar performance. She’s on a level that no one else is on in the league. Our ambition is the same, we want to keep her and will do everything we can to keep her.”

Eriksson: A squad win | Bright: We’re like a family

Chelsea captain Magda Eriksson told Sky Sports: “It means much winning a league, but winning it this way is even more. We’ve used every single member of the squad, everyone has contributed. It’s a squad win.

“Other teams had injuries and it showed on the pitch in their results. We’ve had setbacks and injuries and even though it’s not been smooth, we’ve found a way to win. It’s the team, the girls help each other to win.”

Millie Bright told Sky Sports: “Really proud. Everyone says it’s like a family and it really is. I absolutely love every single one of them [team-mates]. The part of the game we hate is losing players.

“In those moments, we’ve learned how to deal with each other. We didn’t even get out of gear. It was about executing it and doing the fundamentals of the game plan.

“Start to finish has been really tough. I think all season our mentality has been to be brutal. It was really tight at the top, it was like a cup final. You saw from the results it was 1-0 games and we found a way to win.”

Erin Cuthbert told Sky Sports: “It means everything to everyone. We’ve been through a lot and just got on with it. A lot of the year we’ve been out of the limelight, a lot of people wrote us off in the middle of the season. But we never did.

“There’s the mentality in the dressing room to claw back from games.

“We weren’t playing a game in the first-half but we showed it was ours to win. We used the crowd, we needed them today. It was amazing.”

Bowen gets hat-trick of assists as West Ham crush Norwich